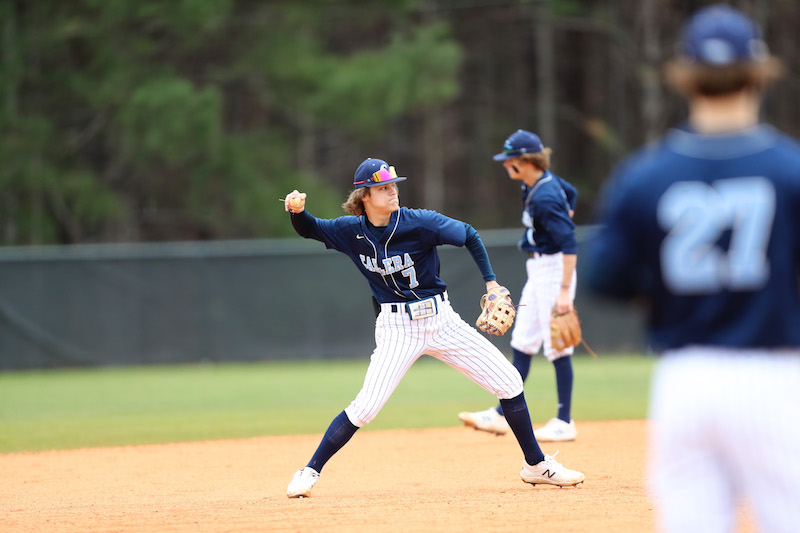 Calera picked up a win against county foe Chelsea on March 10 thanks to a dominant six innings on the mound and steady offensive play. (For the Reporter/Cari Dean)

The Eagles jumped in front 1-0 in the first inning and never trailed, adding two more in the third and three in the sixth before fending off a late charge from the Hornets in the top of the seventh to grab the four-run victory.

After starting with a quick inning defensively in the top of the first, Calera came to the plate and put the first two batters of the second inning on base with a hit batter and single.

Both baserunners advanced on a double steal shortly after, which allowed Matthew Windham to bring home the game’s first run with a ground out to second.

The Eagles did leave a runner in scoring position, however, keeping the early lead at 1-0.

A quiet second inning followed before the Eagles put together two runs in the bottom of the third.

Windham reached base safely to lead off the inning thanks to an error after battling in a long at bat.

Two outs followed, but Calera was able to string together a two-out rally that started with a Bentley Berry walk.

With two runners in scoring position for Mac Graham, he capitalized with a line drive to left field that brought both home for a 3-0 lead before the final out of the inning was recorded.

With continued strong pitching from Preston Stokes on the mound, Chelsea never could find an opening to cut into that deficit.

The Eagles capitalized with more offensive success in the bottom of the sixth.

Another hit batter and an error quickly put two runners on base and eventually ended up with Jacob Somners on third before scoring on a passed ball during the next at bat.

A strikeout was followed by a walk and fielder’s choice to bring home another run, before Christian Byrley doubled to left field to bring home Calera’s sixth-and-final run of the night.

Down to their final three outs, the Hornets attempted a comeback in the top of the seventh when a walk and error allowed Reid Gongwer to score for their first run of the game.

Eventually, a wild pitch allowed Christian Kallaher to cross the plate and make it 6-2, while Chelsea also put runners on first and second with one out.

Windham, however, was able to finish off the game on the mound by forcing a double play to cement the 6-2 victory.

Graham led Calera with one hit and two RBIs, while Windham added two RBIs and two runs scored. Stokes and Bunn each added one hit as well.

Stokes got the start on the mound and struck out six, while allowing two unearned runs in the top of the seventh. He gave up three hits and four walks. Windham then got the final two outs of the game.

Chelsea was led by Jones, Chris McNeill and Gongwer with one hit each.