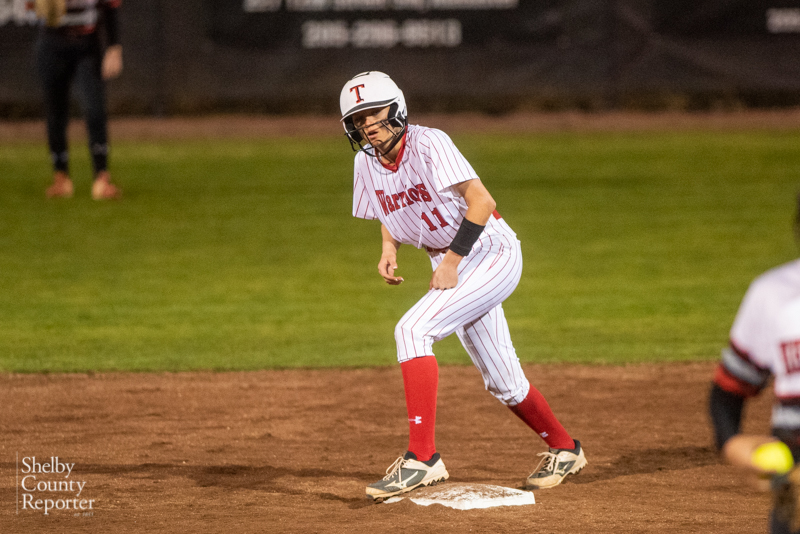 TUSCALOOSA – Seven days between games didn’t slow down the Thompson Warriors, as they came out of their first area matchup of the 2022 softball season with a dominant 14-0 shutout.

Taking on Tuscaloosa County on the road, the Warriors outhit the Wildcats 18-2 to pick up the victory in a shortened six innings thanks to an eight-run sixth inning to put the game away.

The Warriors scored one run each in the first and third innings on an RBI single from Laney Williams and an RBI ground out from Ella Pate.

One of Thompson’s biggest innings, however, came in the top of the fourth when the Warriors brought home four runs. After starting the inning with three consecutive singles, a fourth single in a row drove home one run before a bases-loaded walk and two sac flies in a row added two more for a 6-0 lead.

But the biggest inning of the game for the Warriors came in the top of the sixth.

After a walk and hit batter loaded the bases, Madison Poplin drove home the 10th run of the game with an RBI single before Dailynn Motes added a two-RBI single to make it 12-0.

Poplin then scored on a passed ball before Williams added an RBI single to make it 14-0, which became the final score after a 1-2-3 bottom of the sixth.

Williams led the way at the plate with a 4-for-4 game featuring three RBIs, while Motes was just behind with a 4-for-5 game that included two RBIs. Poplin was also perfect at the plate, going 3-for-3 with one RBI.

Tindell added two RBIs on two hits, while Clemmons and Pate each had two RBIs on one hit. Jenna Williams finished with one hit and one RBI, while Eleanor DeBlock added a hit and a walk.

DeBlock got the start and the win in the circle as well, pitching five innings and allowing two hits with five strikeouts. Holly Selman closed out the game with two strikeouts and a 1-2-3 inning.