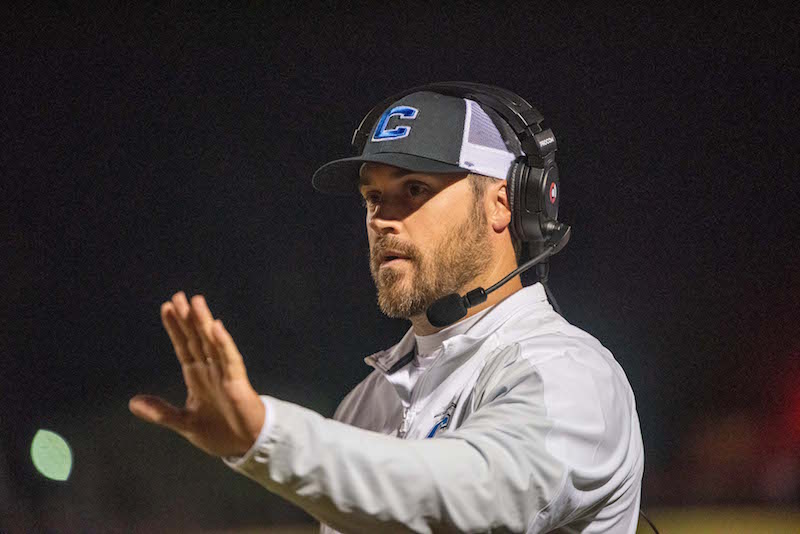 Chelsea is now looking for a new football coach after Dustin Goodwin was approved as a new assistant coach at Thompson High School on Monday, March 14. (Reporter photo/Keith McCoy)

CHELSEA – The Chelsea Hornets will be looking for a new head football coach going into the 2022 season after Dustin Goodwin was approved as a new assistant coach at Thompson High School on Monday, March 14.

The move for Goodwin comes after serving as Chelsea’s head coach for the past four years, leading the Hornets to a combined record of 15-27 and two appearances in the playoffs.

“Chelsea is an outstanding place with outstanding people,” Goodwin said. “We’re not relocating right now. My wife and kids will still be here. Talking with the players, it was not easy. We love the relationships we’ve built with them. Obviously, we want them to succeed with all they do and we’ll always be here for them.”

Goodwin will transition to take on the role as inside wide receivers coach at Thompson High School, where he said he hopes to contributed to a team that has won three consecutive state championships.

“It’s a good place and too good of an opportunity to turn down after sitting down and talking with everyone,” Goodwin said. “I’m looking forward to being a part of a program that has established itself as not just one of the best in the state, but nationally known. Coach (Mark) Freeman has been the best everywhere he has been, so I’m just looking forward to doing whatever they need and being a part of it. I want to be like normal, keep my head down and work hard.”

Goodwin did say it was a difficult decision to make because of the kids who have impacted him at Chelsea High School.

“The kids have always worked hard and done what we’ve asked,” Goodwin said. “We talked week in and week out about the fight that our kids had. Some of those moments, you’ll never forget.”

Goodwin’s teams seemingly improved each year at Chelsea, including what was close to his best season this past year.

The Hornets started 0-4 against one of the most difficult schedules in the state, dropping two of those four by seven points or less and one by 13 before then winning four in a row to earn a spot in the playoffs.

Chelsea went on to lose to Mountain Brook and Calera to end the regular season before then falling 30-20 to Oxford in the first round of the playoffs.

“I was just proud of the perseverance of kids and able to fight our way back to get a chance to play in the playoffs,” Goodwin said. “I’m really proud of the effort our kids had all season. It was a fun group to be around, as were all of these kids we got to coach to be honest with you.”

Goodwin said his one parting message to his players was to know he will always love them.

“As doors open and close and time goes by, people come and go, but relationships are always there,” he said. “The love is always there, and I hope that they know that.”

Chelsea will now look for a new head coach to replace Goodwin, who succeeded Chris Elmore (2013-2017).

The last winning season for the Hornets came in Elmore’s second-to-last season with Chelsea, as they went 8-3 to make the playoffs for the second year in a row.

The Hornets, however, haven’t won a playoff game since Wade Waldrop led them to a 21-13 win against Albertville in 2007.

Chelsea will also make the leap to Class 7A this season, joining the difficult Region 3, which features the like of Goodwin’s new team Thompson as well as Hoover, Hewitt-Trussville, Spain Park, Vestavia Hills and others.

Chelsea as a city is also in the middle of trying to determine if it will remain part of the Shelby County School system or break away to form its own city school system.