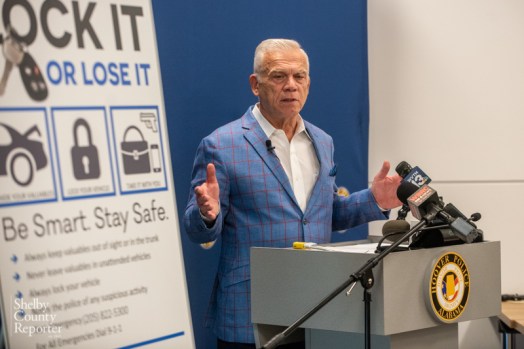 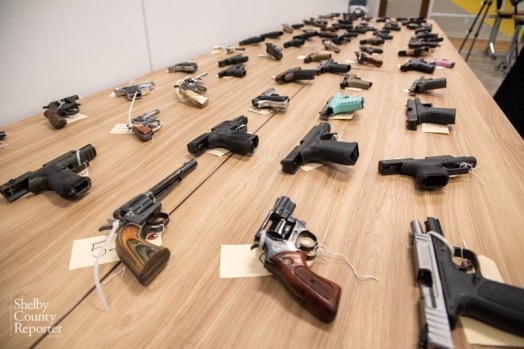 At a press conference on Thursday, March 10, the Hoover Police Department displayed 113 handguns, the number of guns stolen from vehicles in Hoover last year.

HOOVER – The Hoover Police Department is ramping up its efforts to combat car break-ins by urging residents to lock their car doors.

“The Hoover Police Department wants everyone in our community to know that we’ve got a growing problem,” Hoover Police Chief Nick Derzis said. “Unfortunately, that problem is car break-ins; specifically, one particular item that’s being stolen: guns.”

According to Derzis, the vast majority of the city’s residential car break-ins involve automobiles that are left unlocked.

“We want to tell people to please lock your car,” Derzis said. “Please don’t leave your guns in the car, but for heaven sakes if you’re going to, please lock them up. And also, put your valuables somewhere in a safe place.”

Derzis said many of the car break-ins happen overnight in neighborhoods.

“We’ve got individuals that show up in a particular neighborhood. They walk down streets, and they check door handles,” Derzis said. “If the door handle is locked, they go to the next vehicle. If it’s unlocked, what do they do? They get in it, see what’s there and, unfortunately, the majority of the time they find wallets, they find purses, they find electronics, they find money and what else? Guns.”

Last year, Hoover had 335 car break-ins and 113 firearms reported stolen out of vehicles, the majority of which were unlocked, according to Derzis.

“One out of three cars that got broken into last year in the city of Hoover lost their guns,” he said. “We’re not the only ones. Other cities all over America, this is happening.”

In the past five years, the city has had 480 guns stolen out of vehicles.

The HPD has launched public safety campaigns on social media with the hashtags #LockItOrLoseIt and #9PMRoutine.

Derzis said residents who participate in #9PMRoutine, another crime prevention program, will receive notifications from the HPD each night reminding them to lock their doors and secure valuables in a safe place.

“We’re hoping these two campaigns will actually help us,” Derzis said. “We just can’t continue, when you see the violence all over the metro area, to think that with this type of arsenal that’s being stolen every year, how many of those are being used in crimes in our adjacent cities.”

Derzis said the HPD has free gun locks available to residents who need them.