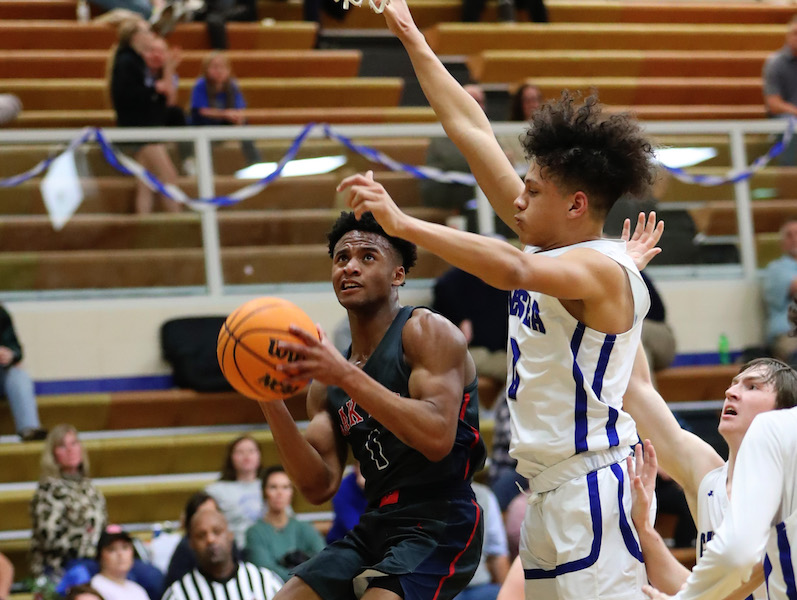 Chelsea and Oak Mountain will now compete against each other in the same area in the sport of basketball. (For the Reporter/Cari Dean)

The biggest change remained Chelsea’s leap into the 7A classification in each sport, while several will now have new area alignments for the 2022-2023 and 2023-2024 sports calendar seasons.

The sport of basketball impacted the most teams locally.

In Class 7A, the Chelsea Hornets will join a difficult area featuring two other local teams, including 280-area rivals the Oak Mountain Eagles and Spain Park Jaguars.

Those three teams will compete alongside Hewitt-Trussville in Class 7A, Area 6.

Each of those opponents will be new for the Eagles, who previously competed with Thompson, Hoover and Tuscaloosa County.

Those three teams, including the Warriors, will now compete in Class 7A, Area 5 alongside Vestavia Hills, who used to be in the same area as Spain Park and Hewitt-Trussvile.

There was also a shift in Class 6A for all four local teams.

With Chelsea’s move up, Briarwood will now shift into an area with two other local teams. The Lions will join Helena and Pelham in Area 8, which will feature those three teams.

As for the Calera Eagles, they’ll compete in a three-team area as well, taking on Chilton County and Benjamin Russell in Area 5.

Formerly, Briarwood was in an area with Chelsea, Homewood and Mountain Brook, while Calera, Helena and Pelham all competed against Chilton County in the same area.

In the 5A classification, the Shelby County Wildcats will keep Central-Clay and Sylacauga in their region, but Jemison will be added to the area in place of Talladega.

The Montevallo Bulldogs will remain in Class 4A, Area 6, where they’ll continue to compete against Bibb County and West Blocton with Holt replacing Dallas County.

The Vincent Yellow Jackets and Westminster at oak Mountain Knights will compete against one another in a crowded and difficult Class 2A, Area 8.

Other opponents in the area include The Altamont School, Holy Family Catholic and Cornerstone Schools of Alabama for one of few five-team areas.

The sport of wrestling saw a big change as well with the creation of individual classifications for 5A and 6A teams to give a more level playing field to athletes wrestling in the 5A classification.

In Class 7A, Chelsea, Oak Mountain, Spain Park and Thompson will all compete in Section 2, putting all local teams in the same section after previously being split between the two.

That is also the case for the two local 6A schools who compete in wrestling, as the Helena Huskies and Pelham Panthers will both compete in Section 1.

The Shelby County Wildcats now get the benefit of a smaller section and competing against schools solely in their classification in Class 5A, as they’ll compete in Section 1 alongside 12 other teams.

Montevallo will continue to compete in the Section 1 of the 1A-4A classification for the next two years.

As for the duals portion of the season, the Chelsea, Oak Mountain, Spain Park and Thompson will all compete in a difficult Region 3.

With 6A now on its own, Helena and Pelham will compete against Brookwood, McAdory, Northridge and Paull Bryant in Region 3.

Shelby County will compete in the largest 5A Region, but it is still smaller than the previous 5A-6A region. The Wildcats will compete against Beauregard, Elmore County, G.W. Carver, Holtville, John Carroll, Ramsay and Tallassee.

Montevallo will remain in Region 3, and the Bulldogs will compete against Alabama School for the Blind, American Christian Academy, Oak Grove and Thomasville.

Track and field was straight forward, as teams will remain in their current classifications with Indian Springs in 1A-3A; Westminster at oak Mountain and Shelby County both in 4A-5A; Briarwood, Calera, Helena and Pelham all in Class 6A; and Chelsea, Oak Mountain, Spain Park and Thompson are all in Class 7A.

There was some shakeup in the bowling regions for several teams.

In the 6A-7A classification, Calera, Helena, Oak Mountain, Pelham, Spain Park and Thompson will now all compete in the same region for boys and girls bowling.

They’ll be in a crowded region of eight teams that also includes Hoover and Vestavia Hills.

Previously, Calera, Helena, Hoover, Pelham and Thompson were all in a region together, while Oak mountain, Spain Park and Vesavia Hills were in a separate region together.

Indian Springs’ boys and girls will compete in Region 5 of the 1A-5A classification featuring Corner, John Carroll, Oak Grove, Pleasant Grove and Ramsay. The only opponent that will remain the same from when Springs was in Region 3 is John Carroll.