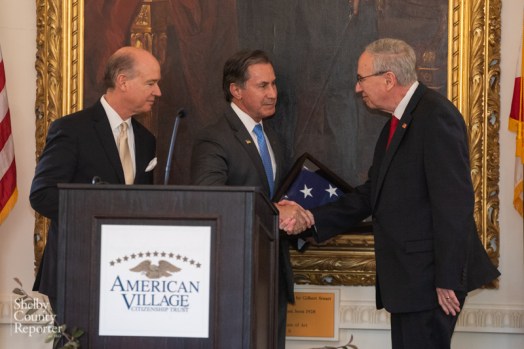 Many elected officials and supporters of the American Village attended a retirement reception for American Village founder Tom Walker on Monday, March 14. Walker has stepped down from full-time service as president and is serving in a part-time capacity as president emeritus. (Reporter Photos/Keith McCoy) 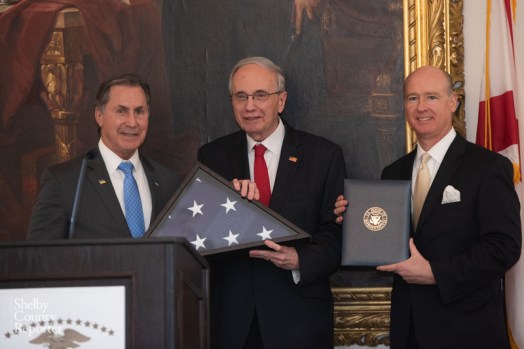 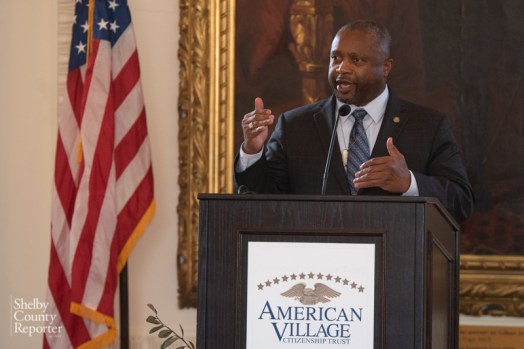 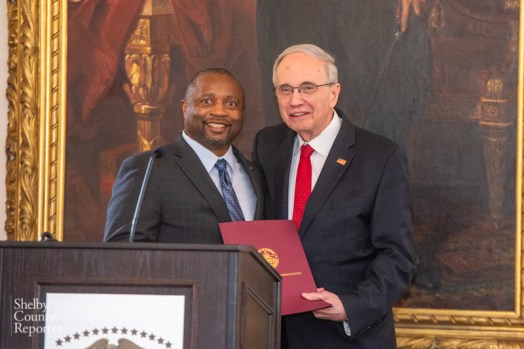 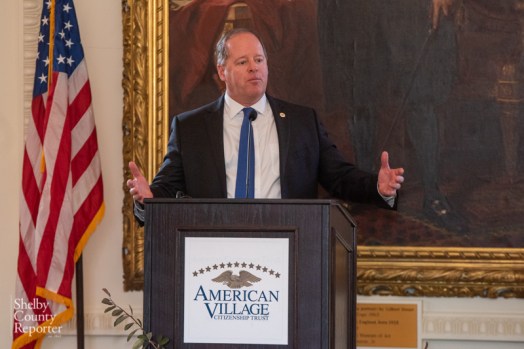 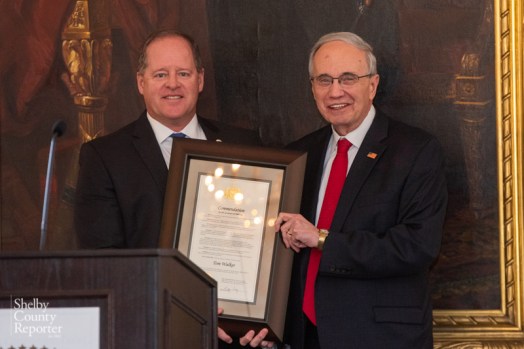 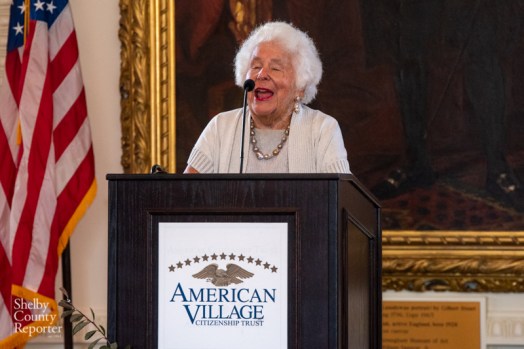 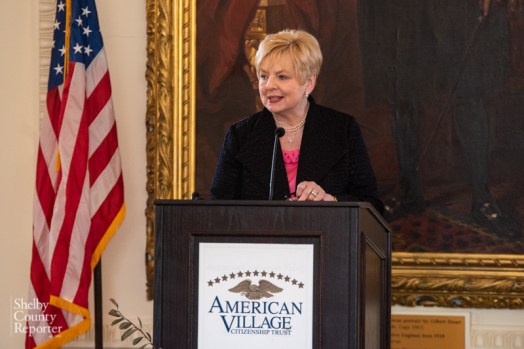 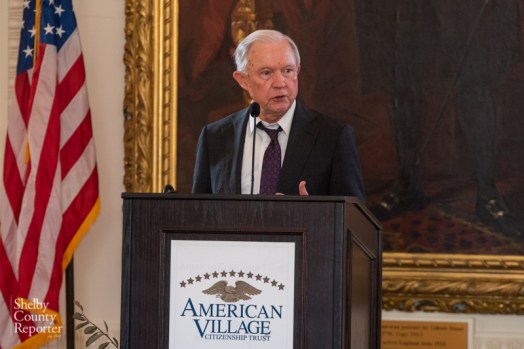 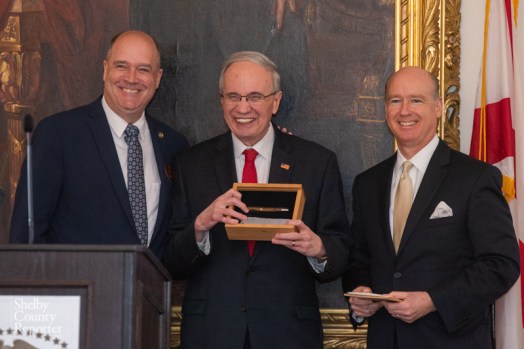 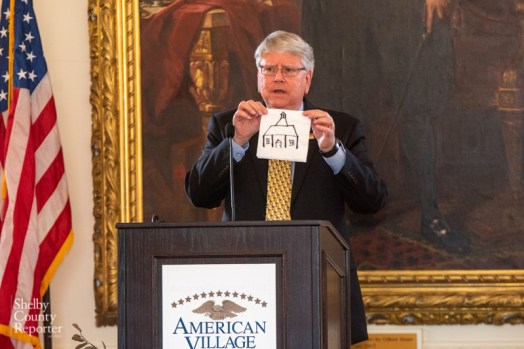 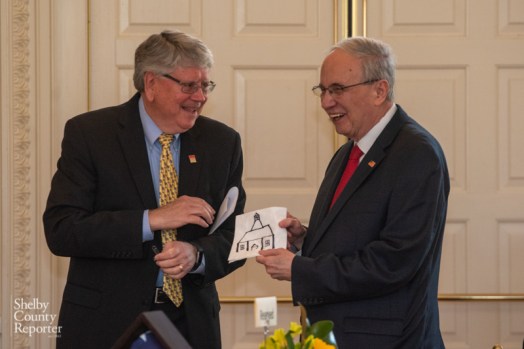 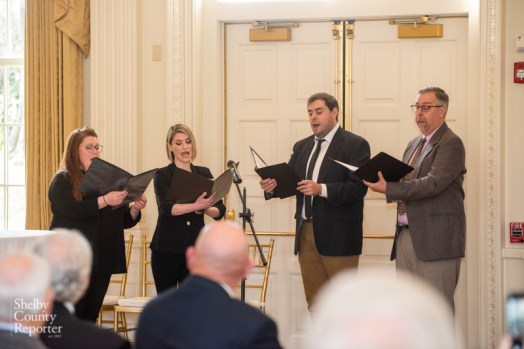 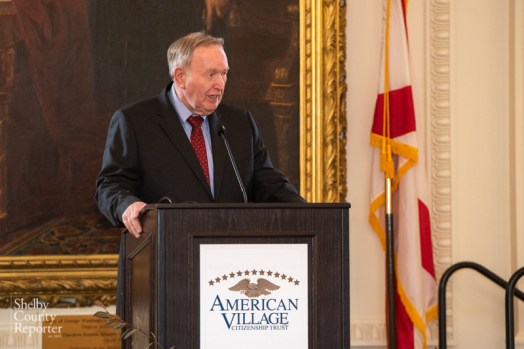 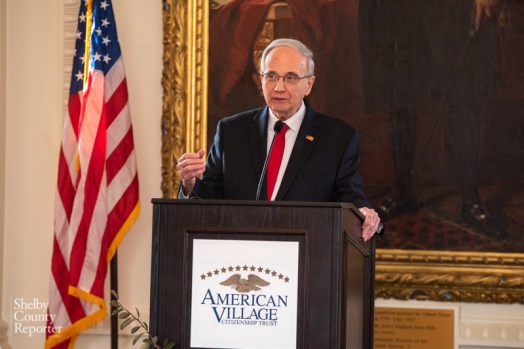 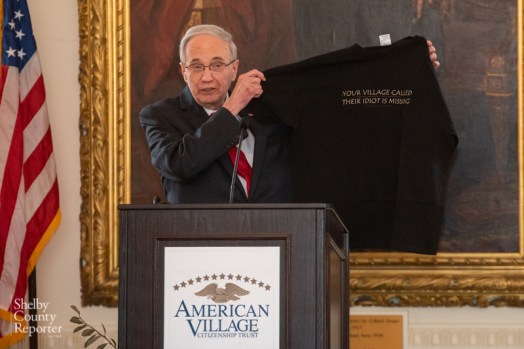 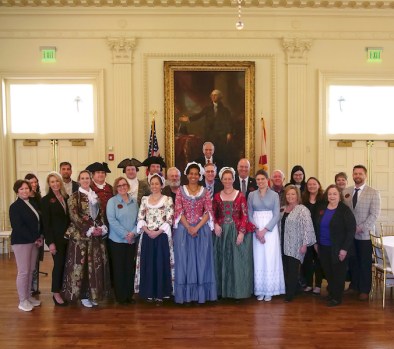 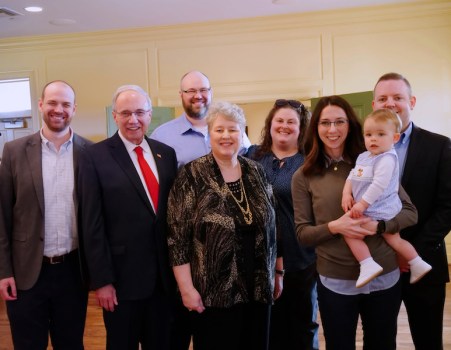 Walker recently announced his decision to retire from his full-time role as president of the American Village, a place he had the idea of establishing as an American history and civics educational campus to inspire and prepare young people for roles as citizens and leaders.

“This is not a farewell,” Walker said, noting the American Village Citizenship Trust Board of Trustees has approved for him to continue to serve in a part-time capacity as founder and president emeritus. “It is the close, indeed, of one season and the beginning of a new season where I earnestly pray that we will continue together united in the great purposes of the American Village, warmly welcoming my successor when he or she is chosen and being committed to a new season of even greater labors, opportunity and great hope for our beloved country.”

Located on the old farm that once belonged to the late T.M. and Ellen Virginia Burgin of Vestavia, the American Village is the product of Walker’s belief that more needed to be done to promote American historical and civic literacy among citizens of all ages, but particularly young citizens.

“In time the notion of my being someone actually to do something about this conviction imperceptibly but firmly took hold,” Walker wrote in reflections published in a commemorative booklet distributed at the reception. “For several years I began to envision and wrestle with the idea of what would become the American Village, a unique American history and civics education campus to inspire young people (and others as well) to make powerful connections to our shared legacy of liberty and self-government, as a preparation for their own individual service as citizens and leaders.”

Since opening in November 1999, the 188-acre campus has served more than 750,000 students from Shelby County and throughout the southeastern United States, and also draws thousands of public visitors each year.

United States Congressmen Robert Aderholt and Gary Palmer presented Walker with a commendation from the House of Representatives honoring his retirement, along with an American flag flown over the U.S. capital in Walker’s honor.

State Rep. Kenneth Paschal presented on behalf of the Shelby County legislative delegation a resolution of commendation to Walker, and said two words that describe him are “God” and “country.”

Alabama Bureau of Pardons and Paroles Director Cam Ward shared a commendation on behalf of Alabama Gov. Kay Ivey, and said, “This campus, this facility, is Tom Walker. So many of us are so fortunate to have been a part of this.”

Former American Village Board Chair Vaughan Morrissette said Walker’s idea of creating an educational campus for history and civics programs has spread to other states, including Utah and Arkansas.

“This place has set an example that people want to follow,” Morrissette said. “It’s such a fabulous thing, and it’s all due to this one person who has believed in it, and he brought people in that believed with him.”

American Village Board of Trustees Chair Carol Brown described Walker as a great friend and a visionary.

Dr. Beth Hamer, Chapel Board Chair and Board of Trustees member, said Walker’s vision of education, inspiration and good citizenship convinced her and many others to help with building the American Village.

“He is the most intelligent, visionary, persistent leader I have ever observed,” Hamer said. “God’s plan for him and this American Village have indeed been a dream that has come true for this state.”

Jeff Sessions, former state senator and U.S. Attorney General, described the American Village as “one of the greatest individual achievements by anybody I know.”

“He knew what he wanted to do, and he set about and has given his life to it,” Sessions said of Walker. “Tom, congratulations on your fabulous work, and we look forward to continued success.”

American Village Chief Education Officer Val Crofts presented Walker with a letter from the United States Semiquincentennial Commission thanking him for his work, in addition to a pen made with wood from Independence Hall, the birthplace of the Declaration of Independence and Constitution.

In 2017, Walker was one of only 16 citizens appointed by Congressional leaders to the Commission, which is responsible for leading the nation’s 250th birthday celebration and commemoration of American Independence in 2026.

Walker was unanimously elected as vice chairman of the national commission at its first meeting in Philadelphia.

Kirk Lightfoot, vice president of the American Village Public Educational Building Authority Board and close college friend of Walker’s, shared humorous anecdotes from the period of time in which Walker was starting to share his idea for the American Village with his wife, Betty, and others.

Lightfoot even mentioned the infamous napkin on which Walker sketched the initial concept for the American Village.

“This is a day that all of us that have served on the board and been involved in the Village have just hoped would never come,” Butler said. “Tom’s impact on this Village will live forever, and we’re very thankful for Betty and his family for allowing us to have Tom with us all this time as chief executive officer and president.”

Walker expressed deep gratitude to the many people who have been involved with the American Village over the years, including but not limited to his family, staff members, Board of Trustees members, the Shelby County Commission, architect Mike Hamrick and countless supporters.

“We could not have accomplished what we have without you, your prayers, your presence, your treasure and, most importantly, your heart,” Walker said. “This place is not about the buildings; it’s what takes place within them. It’s trying to build in the hearts and minds of young people a sense of stewardship of what George Washington called ‘the sacred fire of liberty.’”

In his part-time role, Walker said he will continue to have an office at the American Village and will focus on several priorities, including completion of a replica of Independence Hall before the nation’s 250th birthday on July 4, 2026.

“Please understand that, though I am retiring from full-time duty, I am not retiring from this cause,” Walker said. “This season of transition must not become a time of flagging commitment to the purposes of this place, for the need is great. We have deep divisions in our country, and in times of monumental challenges not only at home but certainly the world, our country beckons us to be an American people, a singular people.”

Regarding his own transition, Walker quoted a passage of scripture from the Bible that says, “To every thing there is a season, and a time to every purpose under heaven.”

“I shall always humbly and gratefully acknowledge God’s providential care in bringing all of us together to create and build and engage in this important work,” Walker said. “In these many seasons, I’ve been privileged to witness and behold the good fruits of the support of each of you in this room.”