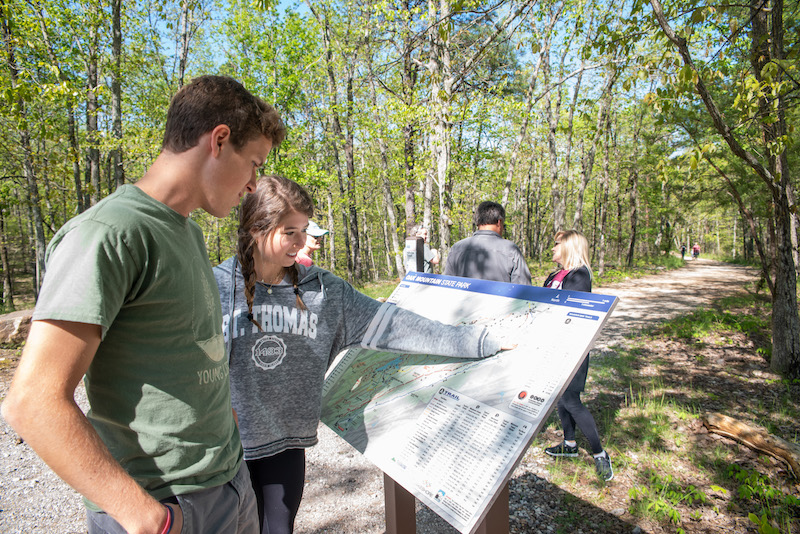 Public parks like Oak Mountain State Park in Shelby County have seen a significant increase in visitors during the COVID-19 pandemic. (File)

Two years ago this month, residents’ everyday routines and activities came to a halt as the novel coronavirus made its way into our communities and started its rapid spread.

Social distancing and quarantining became common practice in people’s efforts to avoid exposure to COVID-19, and government officials across the country began to issue stay-at-home orders.

The “shutdown,” as it is called, saw schools transition to remote learning, many businesses lean on curbside services and a growing number of professionals figure out how to do their jobs from home.

With these adjustments came changes in local tourism and economic development, too.

As people sheltered from the virus at home, the travel and tourism industry felt the impact of the pandemic like never before.

In Shelby County, the first few months of the 2019-2020 fiscal year were strong, a relief considering what the remainder of the year would hold for the county’s lodging tax revenue.

“Going into the first six months of the new budget year starting in October 2019, we had a strong first six months which allowed us to weather that storm in lodging tax,” Shelby County Manager Chad Scroggins said. “We saw, in the first few months following March 2020, where lodging tax had dropped by 60 percent. It was between a 40-60 percent reduction in those few months, when people were sheltering at home and not traveling.”

Scroggins said county leaders took a conservative approach going into the next budget year, with cautious optimism that lodging tax revenue would pick up as the first waves of vaccines were distributed and in-person events started to return.

“In late spring to early summer 2021, we saw some significant recovery after people started getting vaccines,” Scroggins said. “We beat our projections because we had budgeted very conservatively.”

However, Scroggins said the current budget year is revealing a significant uptick in lodging tax-generated revenue.

“The first five months of this year have generated over $1 million,” he said. “This year’s revenue would be $140,000 over what it was in February 2020 before COVID hit. We’re having a stronger first five months this year than we did prior to COVID.”

Scroggins said he anticipates Shelby County to see marginal increases in business for hotels and restaurants this summer as Birmingham hosts the World Games.

In addition, the county added a new position to further emphasize its tourism and event opportunities throughout the year.

Kendall Williams was named Shelby County’s manager of tourism and events in February 2021.

“We are starting to reap results in having more targeted efforts in that area,” Scroggins said, noting the county has a diverse offering of recreational amenities and events. “We know having that variety will meet the interests of all those different residents. That keeps all of our 14 municipalities with events and attractions in their specific areas and spreads out the users, which is an important thing.”

Williams said the early months of the pandemic seemed to prompt many residents to explore places they had not visited before.

“Our residents are our best ambassadors,” Williams said. “I think it forced everybody to get out and realize the gem we have in Shelby County.”

Williams heard people talk about seeing the tree carvings at Orr Park in Montevallo, seeing the Cahaba lilies in bloom at Cahaba River Park in Helena and visiting Oak Mountain State Park for the first time.

“They got to explore and try new places, and that’s kind of trickled down to telling their friends and family to come visit,” Williams said. “That has had a residual effect on our local tourism with our outside amenities being our greatest attraction. You could visit a park and not have those restrictions that were like other attractions.”

Another factor that helped Shelby County in 2020 was being able to hold certain outdoor events, such as large fishing tournaments, that didn’t go against the COVID-19 protocols.

The county is also opening two new parks, Dunnavant Valley Park and Double Oak Park, near the 280 corridor this year.

Regarding area hotels, business has remained steady despite pandemic-related challenges.

“They had a lot of people that have continued to utilize their facilities throughout the last year and a half,” said Kirk Mancer, president and CEO of The Shelby County Chamber.

Mancer said most businesses, including those in tourism and recreation, have been experiencing challenges tied to the current shortage of potential employees.

As a result, people in management positions have assumed tasks they would not normally handle because they have fewer employees.

But the positive news is people have continued to visit local parks and attractions, which benefits surrounding hotels and businesses too.

“Tourism did seem to stay pretty steady,” Mancer said, “And there was an uptick overall despite the challenges.”

“The health of Shelby County’s economy at that time was good,” Sturdivant said. “Companies were doing what they were doing all over the U.S.; trying to make sure they were continuing the services, or producing the goods they had been, or changing that some to adjust to their customer base, based on all of the impacts of the pandemic.”

The main focus of 58 INC team’s work is supporting Shelby County and its communities in making impactful economic development investments and partnerships that create jobs with major employers, fuel ecosystems for entrepreneurial success, and connect career training to companies.

“We’re trying to establish and support corporate businesses,” Sturdivant said. “Our work is focused on our traded companies that are providing goods and services being transported beyond the bounds of Shelby County. We’re helping them grow or pivot right now, and making sure they’re finding the skilled workforce they need.”

Interest in real estate and under-utilized or vacant property is high, and likely will remain high for a long time.

“We will continue to see that, I think, for a number of years,” Sturdivant said. “Over the last year, the demand for land and buildings has continued to increase. We have seen a lot of repositioning, not unlike the residential market, with companies looking at ‘can we expand here?’ When one moves, another one is coming in to take that space.”

Sturdivant said companies are also looking at how to modernize, automate and, in some instances, consolidate their operations, depending on their industry needs.

“The impact of COVID and baby boomers retiring, and the impact of the labor shortage, is having them reflect and look at automation more seriously now,” she said. “It’s not a replacement of people, but it puts that workforce in a new, expanding category of someone who is operating a system or mechanical process.”

In addition, supply chain issues have prompted companies to make major shifts in how they intend to do business going forward, according to Sturdivant.

As an example of this, Sturdivant referenced a story in November 2021 about Birmingham-based Graham & Company and Sunbelt Paper & Packaging announcing plans for a 216,000-square-foot distribution facility in Calera.

Sunbelt Paper & Packaging, one of the largest privately owned packaging and industrial supply companies in the Southeast, needed to expand to keep up with an increased demand for its products, Sturdivant said.

Another example of companies adapting to changes during the pandemic is Avanti Polar Lipids in Alabaster.

In November 2020, Croda International signed a five-year contract to supply lipid-based excipients to Pfizer for production of the drugmaker’s messenger RNA-based COVID-19 vaccine candidate, according to an article on the Chemical & Engineering News (C&EN) website. The inactive ingredients were to be made by Avanti Polar Lipids, which Croda acquired earlier in the year.

“Our major employers have done a good job of navigating the effects of the pandemic,” Sturdivant said. “They have thought about their people, their operations and their business, and how (they) could adjust to the impacts of the pandemic.”

Looking to the future

The pandemic undoubtedly has presented many challenges for people, companies and communities in general over the past two years, but resiliency is evident in the responses to it, and in certain cases, has helped turn the negative parts into something more positive.

One example is the Great Resignation, a trend in which millions of Americans have quit their jobs since 2021. While the phrase carries a negative connotation because of the difficulty businesses have experienced in recruiting workers, the trend could also mean a new crop of entrepreneurs is on the way.

“I think that’s exciting for Shelby County,” Sturdivant said. “A lot of potential founders may have already been working during this time, resulting in homegrown businesses that may end up providing a service far beyond the bounds of Shelby County, and creating jobs and fulfilling a need here for local goods and services.

“Opportunities abound in terms of where companies are taking their business, where they are expanding business and modifying to do more with what they have, and that’s exciting to see. I think we will see more investment in our existing companies.”

Sturdivant also pointed to the power of American Rescue Plan Act funds that states, counties and cities are receiving from the federal government for projects that will create lasting benefits for current and future residents.

Shelby County has utilized ARPA funds for a waterline expansion project along U.S. 280 and the expansion of the county’s radio system for first responders.

These and other projects only add to the amenities the county already boasts, including major trail systems and event spaces.

“I think that our best years are really to come,” Scroggins said. “We’re starting to lean in to what we are good at and what our county assets truly are. With our field options that we have throughout our county, we’re getting more and more competitive in the niche-type events. I really think as we spend more time to focus on unique events, our best is yet to come.”