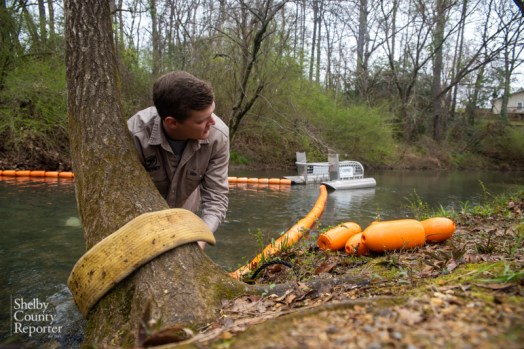 A device known as the “Litter Gitter” was installed in Buck Creek in the Alabaster city limits on Friday, March 11 to help reduce trash buildup in the waterway. (Reporter photo/Keith McCoy) 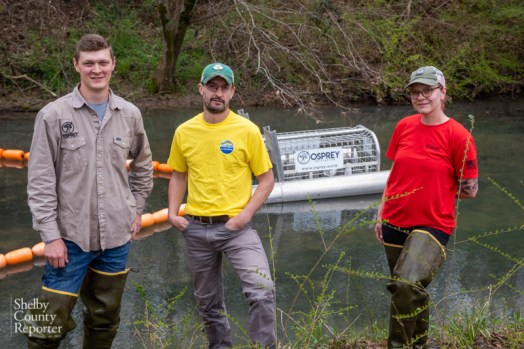 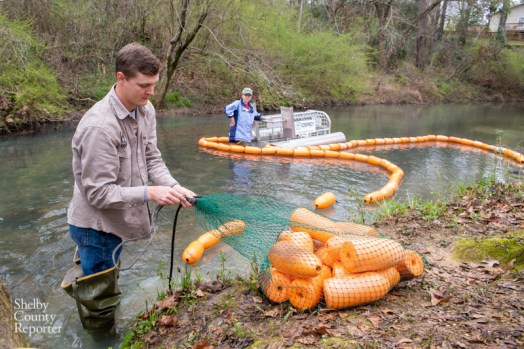 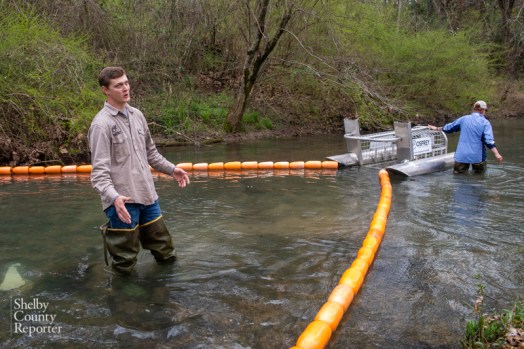 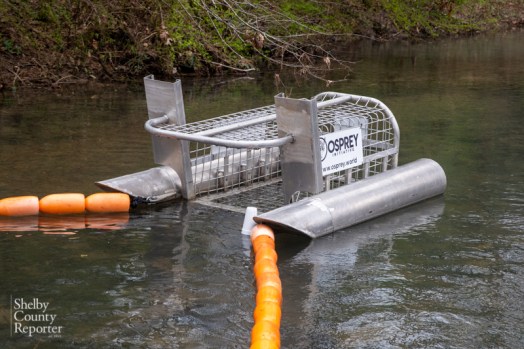 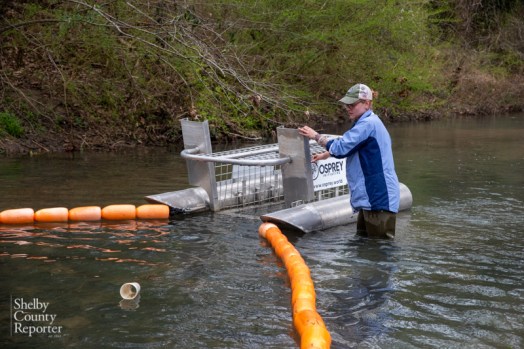 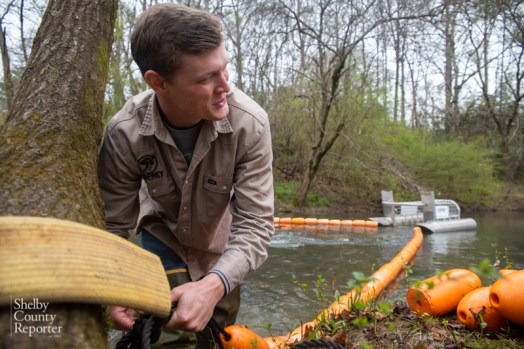 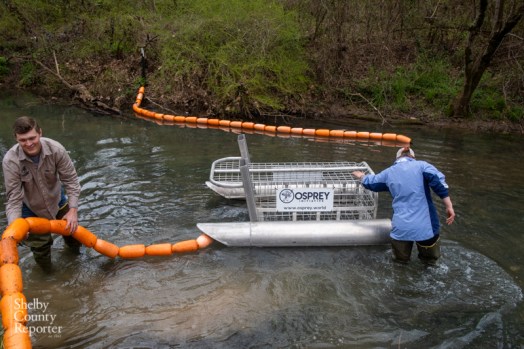 ALABASTER — A litter control device known as a “Litter Gitter” was installed in a section of Buck Creek within Alabaster’s Buck Creek Park on Friday, March 11 and will help reduce litter in area waterways.

Made possible through an EPA Trash-Free Waters grant awarded through the Freshwater Land Trust in spring 2020, the Litter Gitter consists of a metal cage on pontoons tethered to each side of the creek bank. The device collects floating litter such as plastic bottles and polystyrene foam cups, which are trapped in the cage and prevented from continuing farther downstream to the Cahaba.

The Litter Gitter was designed and installed by the Mobile-based Osprey Initiative, which will maintain the system through regular cleanings and within 24-48 hours after each rainwater incident, as well as deeper quarterly cleanups along the banks of Buck Creek. It is one of 11 such devices in the Central Alabama area.

Alabaster native Mitch Lowe, a regional field leader with Osprey Initiative, remembers biking to Buck Creek Park as a kid and expressed excitement about the project.

“I grew up in Alabaster, so I’m fired up for it to be in Buck Creek,” Lowe said. “The city of Alabaster was super supportive, so we’re really glad they approved of us coming to the creek and trying to improve it.”

Lowe said that a significant amount of litter is conveyed to local waterways indirectly through the storm water system, such as from overflowing trash receptacles or restaurant parking lots. It is after heavy rainfall that the device will do much of its work, which is why many of the inspections and cleanings will take place following storms.

Osprey Initiative will report the weight and cubic footage of waste and recyclables collected by the Litter Gitter.

Lowe said the device will remain at its current location until at least the spring of 2023, at which point officials will reassess its specific location within Buck Creek Park. The device is expected to stay inside the park, Lowe noted.

“It’s basically just tweaking it and making modifications,” he said. “It’s been a successful project up to this point. We are thrilled to be able to bring it to Alabaster and work in Buck Creek.”

Alabaster Engineering Director Fred Hawkins said he had observed the Litter Gitter in action, and that it is already removing litter from the creek.

“We were already looking at ways to try to clean up our creeks and our water quality here,” said Hawkins, who was instrumental in securing the project for the city. “Our city council and mayor were excited about it and what it’s going to do for the city and our waterways.”

The project will build upon Alabaster’s Clean Sweep program and is a more direct solution for waterway cleanup, Hawkins said.

To learn more about the Litter Gitter, visit Freshwaterlandtrust.org/litter-gitters. For more information about the Osprey Initiative, visit Osprey.world.