Husky Pride: the story behind The Tire Doctor Inc. mural 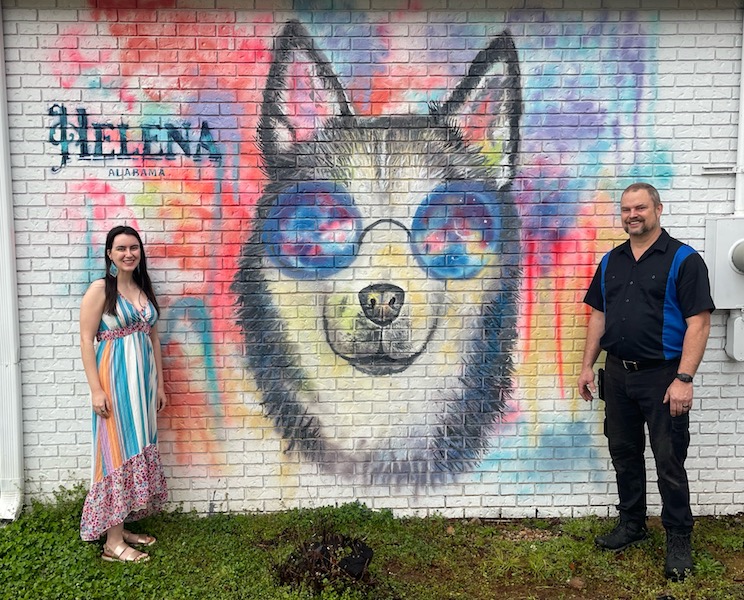 Local artist Danielle Lang and owner of The Tire Doctor Rayme Bryson are responsible for the colorful new husky mural on the side of Bryson’s business. The mural faces County Road 58 and provides a pleasant scenery for people driving by. (Contributed)

HELENA – If you’ve driven down County Road 58 recently, you may have seen a colorful new edition to the local business scenery. Local artist Danielle Lang has been busy creating a special mural on the exterior wall of The Tire Doctor, Inc.

The mural is of a giant, colorful husky with a watercolor backdrop wearing 60’s style sunglasses. Lang approached Tire Doctor’s owner, Rayme Bryson, about sprucing up his wall that faces the county road light. She said it struck her as the perfect surface for a canvas.

“I see the space all the time on my drive home,” she said. “I thought it would make a good canvas, so I reached out.”

“I presented the idea on the What’s Happening in Helena Facebook Page, and I received really positive responses,” he said. “Helena’s been so good to me and I saw it as a way to give back. It’s been getting a lot of attention.”

Bryson and Lang started brainstorming ideas for the mural. Bryson said he wanted something that would represent the history of Helena and its community, and it was Danielle who came up with the husky. They presented the design on Facebook and once again received predominantly positive feedback.

“I think it’s exciting,” Lang said. “I felt like the husky was a good idea because, yes it’s the mascot, but a lot of people are obsessed with their dogs, so I thought it was something different that people would like.”

Bryson said they had a lot of people reach out on Facebook who say the husky reminded them of their own dog.

They’ve been working on it for two weeks now, and Danielle said she’s close to finishing it, though the recent weather has gotten in the way of further progress. The wall sees a lot of traffic and they’re happy to provide some art for people to enjoy as they drive by.

Bryson has been in business for 21 years and moved to Helena in October 2021, and he said ever since then he’s received nothing but love and support from the Helena community. This mural is his way of giving back.

“I was in business for 20 years before I came to Helena, and when I came to this area I was doing more right off the bat than I did 20 years out there because of the traffic and this location,” he said.  “I just wanted to do something that gave back to the community.”

Helena residents may recognize Lang’s work from other murals around town, including by Oversoul Brewing and Helena Hardware. She said sharing her work in such a public way is amazing but also at times shocking.

“Doing my art on a public scale is totally different than doing like a pet commission of someone’s pet that stays in their home,” she said. “This is people who may not have even seen a mural out here, they’ll be able to see it at that traffic light.”

The support from the Helena community is everything to both Bryson and Lang. The mural has garnered several online fans, and Bryson said he’s had clients express how much they enjoy seeing it when they drive by.

“Helena really is about small businesses, shopping local and supporting local,” Bryson said. “I’ve was in business for 20 years in the Hueytown-Concord area, and I’ve never seen anything like this. I was down in January with COVID, I hurt my back last month and was out for a week, and I posted on that page to keep everybody up to date, and the people in Helena have been so supportive and understanding. I just really wanted to give something back to them.”