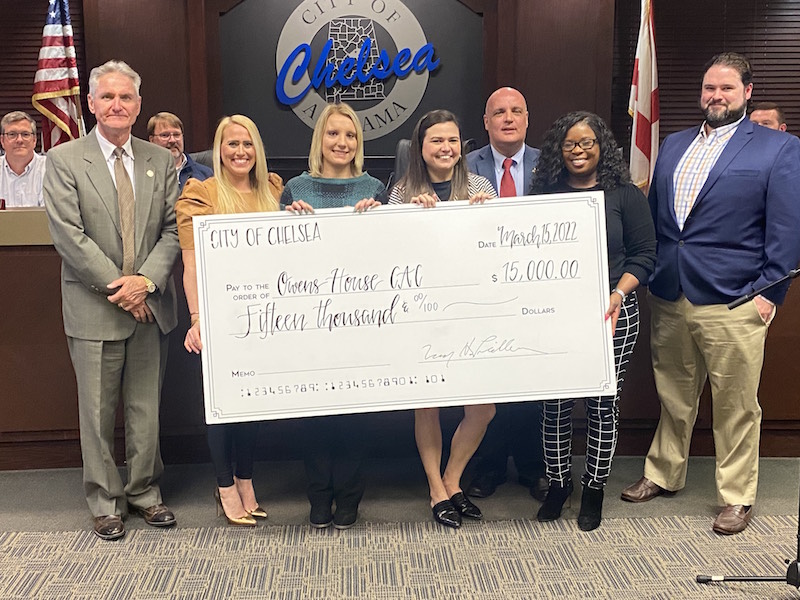 Owens House Executive Director Vetrica Hill, second from right, was surrounded by several staff and board members as she accepted a $15,000 donation check for the children’s advocacy center from Chelsea Mayor Tony Picklesimer on Tuesday, March 15. (Contributed/Wayne Morris)

CHELSEA – The city of Chelsea made a large donation to a children’s advocacy center in Shelby County on Tuesday, March 15.

Owens House has operated in Shelby County for 29 years, according to Hill.

“We serve kids ages 3-19 in the capacity of conducting forensic interviews for those who have experienced some type of abuse or trauma,” Hill said. “We also provide mental health counseling and preventative services. We are just truly thankful for you guys supporting us over the years, and we look forward to working with you all and continuing to serve the children here in Shelby County.”

Initially, the center only provided forensic interviewing services. In 1997, the current facility was built and named Owens House.

“The City Council unanimously wanted to support your organization, and we appreciate what you do,” Chelsea Mayor Tony Picklesimer said. “Thank you for your service, and we’re happy to be able to help you guys.”

In other business, the City Council approved several resolutions and ordinances, and also held a public hearing and first reading for a proposed ordinance to amend Chelsea’s zoning ordinance to include a definition of short-term residential rental and only allow short-term rental in B-2 (General Business District) zoning.

“As a resident of Chelsea, I think it’s very important that we keep residential as residential,” Kevin O’Malley said during the public hearing. “I think it’s important that we do keep the residential areas that we all live in and pay a lot of our hard-earned money separate from business entities. I think there’s a conflict of interest of what the property owners have versus what the business owners have, and I don’t think it’s beneficial to the residents to have for-profit short-term residents staying there on a nightly or weekend basis.”

Picklesimer said the City Council will vote on the proposed ordinance at its next meeting.

The City Council voted to approve:

• A resolution to authorize the mayor to execute an agreement to review cable franchise fee payment compliance.

• A resolution to adopt the Shelby County Hazard Mitigation Plan.

• A resolution to declare property as surplus and authorize its disposal.

• A resolution to authorize the mayor to purchase real estate property for the city.

• A resolution to replace current lighting in city buildings with LED lighting.

• A proposed ordinance to establish a speed limit of 55 miles per hour on U.S. 280 eastbound from milepost 15.6 to milepost 16.1 (the stretch of road between Walmart and Shelby County 39).