Chelsea splits doubleheader with 7A No. 9 Vestavia Hills 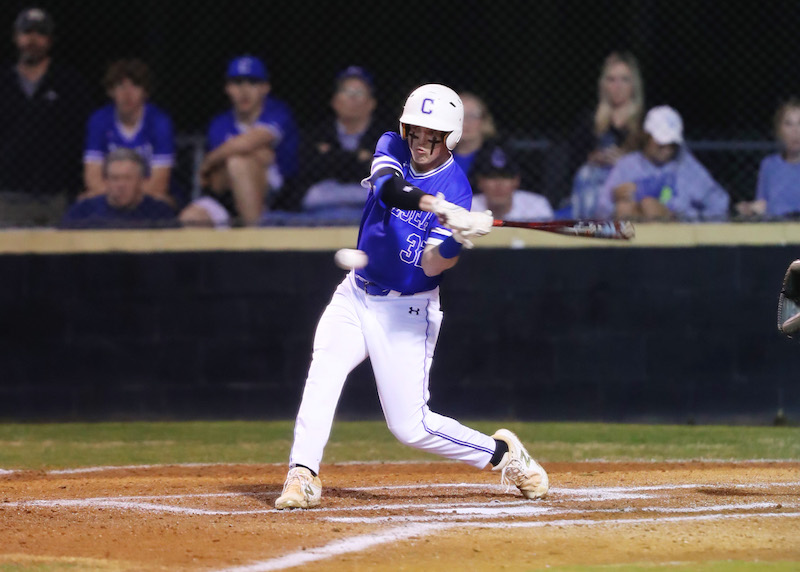 The Chelsea Hornets improved to 7-6 on the season after splitting a doubleheader with Class 7A No. 9 Vestavia Hills. (For the Reporter/Cari Dean)

VESTAVIA HILLS – It has been an up and down stretch of play for the Chelsea Hornets since starting the 2022 baseball season 4-1, but on Thursday, March 17, they were able to split with one of the best teams a classification higher.

Entering a doubleheader with Vestavia Hills off a 2-4 stretch of play, the Hornets fell in the opening game to the Rebels to make it three straight losses, but they responded in the second game with a 7-4 win to inch above .500 again at 7-6.

In the first of the two games, Vestavia Hills stormed out to a 7-0 lead with four runs in the first and three more in the second.

From there, however, the momentum shifted. Chelsea’s pitching staff shut the Rebels down the rest of the way, while the Hornets answered with one run in the third and then four more in the fifth.

That got them to within two of the lead with two innings to play, but that’s as close as they could get.

Chelsea went scoreless in the sixth and seventh to fall two runs shy in a 7-5 loss.

Camper was strong over the final 4 1/3 innings on the mound, allowing two hits and no runs with two strikeouts to give the Hornets a chance.

Game two, however, saw a flip of the script.

Chelsea scored two runs in the first, third and fourth innings to take a 6-0 lead through four innings.

From there, it was all about holding on for the Hornets.

They added one more insurance run in the top of the sixth for a 7-0 lead.

Vestavia Hills came back with three in the bottom of the sixth, but the rally ended there, as the Rebels couldn’t bring home any more in the sixth and only brought one more home in the seventh.

Chelsea was led by Fortenberry with a 2-for-3 game featuring two RBIs, while Kaplan and Campbell McCluney both finished with one hit and two RBIs in the 7-4 win.