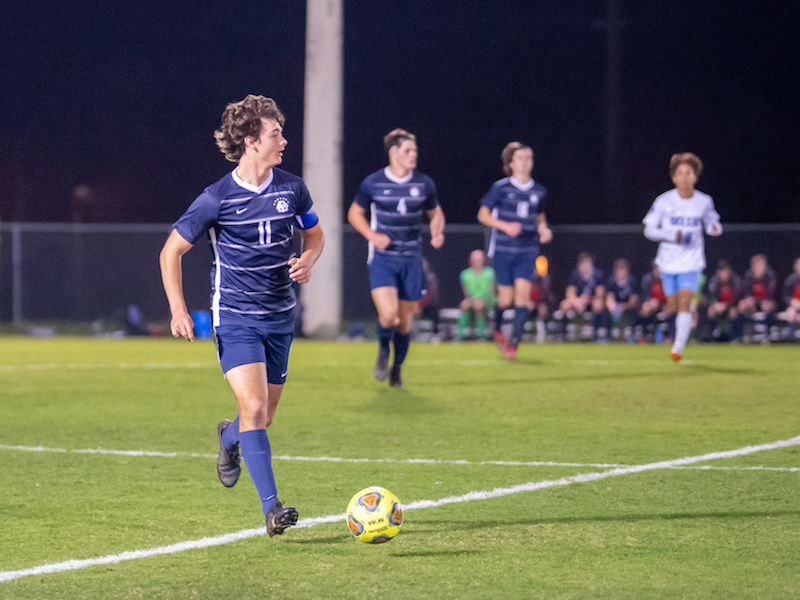 Ranked firmly in the top five of the 7A classification, the Oak Mountain boys and girls soccer teams are now both 3-0 in area play as well.

The boys helped complete that task for the two teams on Thursday night, March 17 in a big area matchup against rival Hoover.

The Eagles scored two first-half goals against the Bucs to steal momentum away, and they never relinquished it from there, scoring three more in the second half to ice a 5-0 shutout victory.

With the win, Oak Mountain bounced back from its first loss in an eight game stretch, as the Eagles have now gone 7-1-1 in the last nine games, including all three area wins in that span.

The Eagles have now beaten each area team once, taking down Thompson in a tight 2-1 battle, Tuscaloosa County 8-0 and now Hoover 5-0.

One of the most consistent aspects for Oak Mountain during that stretch has been the defensive effort.

The Eagles have given up one goal or less in the last nine games, including four shutouts.

With the impressive play lately, Oak Mountain’s boys are now 9-3-3 overall, and the Eagles have given up one goal or less in all but two of their 15 games. They are now outscoring opponents 48-11 with six total shutouts and eight games with three or more goals.

As for the girls, they still sit on top of the Class 7A girls rankings after jumping out to a 10-1-1 record through the first half of the season.

Oak Mountain’s girls improved to 3-0 in area play back on March 4, as they have also beaten each of the area’s three teams once. The Eagles have wins of 10-0 against Tuscaloosa County, 3-1 against Thompson and 3-0 against Hoover.

Overall, they have given up one goal or less in all but one of their 12 games—a 2-1 loss to Spain Park—while they have outscored opponents 43-7.