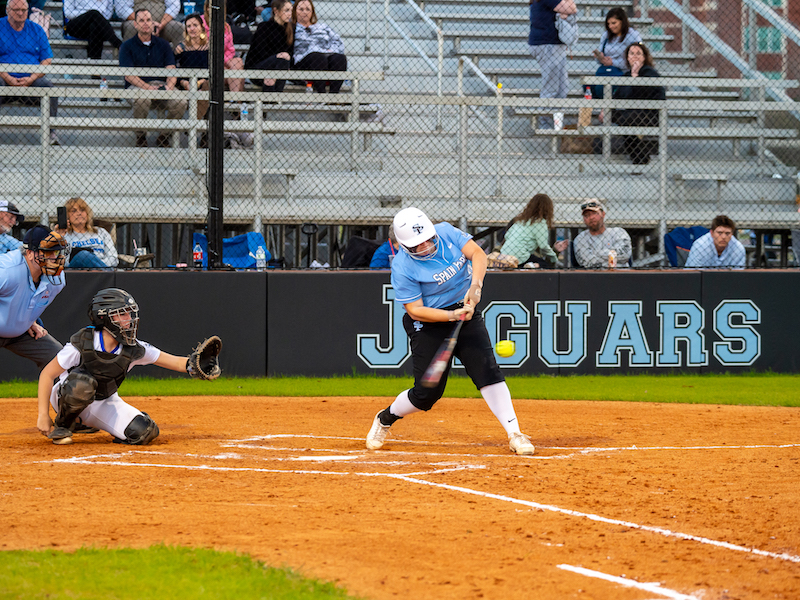 HOOVER – The Spain Park Jaguars continued their impressive season on Thursday, March 17 thanks to a big late inning against county and area rival Oak Mountain.

In the area opener for the two teams, Spain Park took a tie game going into the bottom of the sixth and squashed it with a four-run inning that ultimately made the difference in a 5-1 victory.

The first three innings came and went with little action, as a combined six baserunners reached safely, but got no further in a 0-0 tie through three innings.

In the top of the fourth, Oak Mountain broke the scoreless drought thanks to two quick singles. Anna Dubose led off the inning with a single before a sac bunt put the first out on the board but also advanced the runner to second.

Kristian Carr then singled to right field to bring home the game’s first run. Oak Mountain got one more single after, but two consecutive outs ended the threat with the Eagles in front 1-0.

The Jaguars then answered with a two-out hit from Caroline Whisenhunt, who singled to right field to drive home Charlee Bennett.

In a 1-1 game now, Spain Park put together another big inning in the sixth that ultimately made the difference.

The Jags got three consecutive singles from Maggie Daniel, Bennett and Blakley Watts to start the inning, before Whisenhunt came through big again with a bases-clearing double that put Spain Park in front 4-1.

Later in the inning, Emma Jolley put together a two-out RBI single to add one more, as the Jags went on to close out the 5-1 victory.

Whisenhunt finished 2-for-3 with three RBIs and a run scored to lead Spain Park, while Jolley added a hit and RBI. Daniel, Bennett, Watts and Kyndal Heaton all had one hit.

In the circle, Ella Reed went the distance for the win, striking out 12 and allowing the lone run on five hits and one walk.

Oak Mountain was led by two hits from Dubose and one hit and an RBI from Carr in the loss.