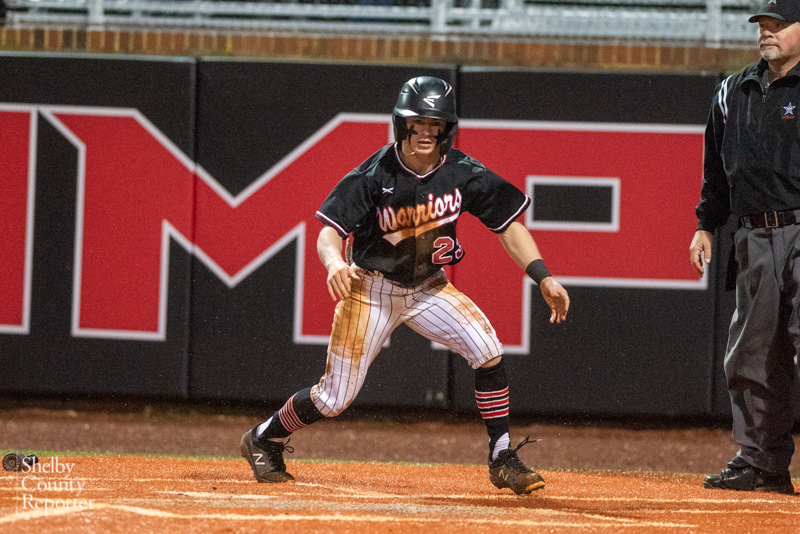 The Thompson Warriors picked up win against Spain Park on Thursday, March 17 thanks to an impressive effort on the mound from three different players. (Reporter photo/Keith McCoy)

HOOVER – For the second time this year, the Thompson Warriors have bounced back from a losing skid with a big win after taking down No. 5 Spain Park on Thursday, March 17.

After losing to the Jaguars 7-3 in a game the Warriors led early a week earlier, Thompson overcame an early deficit this time around to eventually pick up a 3-1 victory.

Spain Park took the early lead with a solo home run over the left field wall from Cole Edwards.

Trailing 1-0, Thompson came back in the top of the second with a two-out rally that saw a walk eventually lead to a run. After drawing the walk, Parker Edmondson stole second to get into scoring position, while Carson Foote hit a grounder to shortstop.

An error eventually allowed Edmondson to round third and come home for the game-tying run.

The game remained tied all the way into the sixth inning before two more errors played a role.

The first allowed Major Paracca to reach safely. Then, after a second out was recorded, Drake McBride got an intentional walk.

Edmondson then stepped to the plate and hit a ground ball that led to another error and Paracca crossing the plate for the go-ahead run.

That ultimately became enough, as Spain Park never could add another run, but the Warriors added an insurance run an inning later on an RBI single from pinch hitter Clay Meacham.

Thompson used three pitchers in an impressive effort on the mound. Devin Brooks and Brodie Holcomb each tossed two innings, while Matt Casey threw three innings. Brooks struck out two and allowed one run on two hits, while Casey struck out three and gave up no runs on one hit. Holcomb then finished the game by allowing two hits and one walk, but no runs.

At the plate, Meacham had the team’s only RBI with his hit, while Ethan Cook and McBride each had one hit as well.