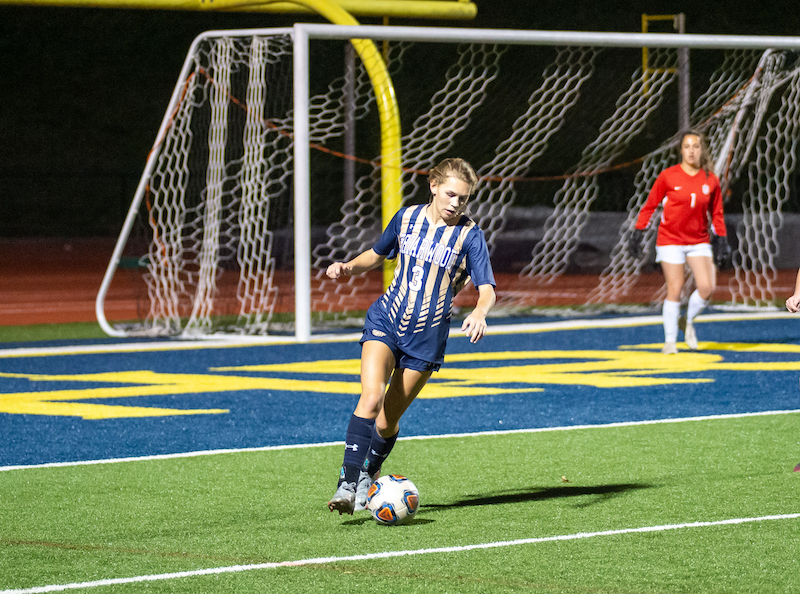 The Briarwood girls soccer team pulled off a 4-0 victory against rival Chelsea on Friday, March 18, to improve to 1-2 in area play. (For the Reporter/Cari Dean)

NORTH SHELBY – In a top-10 battle of two area teams, the Chelsea Hornets and Briarwood Lions met in a crucial showdown on Friday, March 18.

Looking for a leg up coming off losses to open area play, both teams were looking to bounce back with big wins, but it was Briarwood who put together a stellar defensive performance to pick up a 4-0 shutout victory.

Sitting at 0-2 in area play entering the match with a 3-1 loss to No. 1 Homewood and an 8-0 loss to No. 2 Mountain Brook, the Lions were able to pick up their first area victory of the season, improving to 1-2 in area play.

In an area that features all four teams inside the Class 6A top 10, that was key in keeping their hopes of a spot in the playoffs alive with matchups still left against each team.

Briarwood got two goals from junior Abigail Hoaglund in the win, while junior Piper Eighmy added one goal and an assist in the win. Freshman Taylor Leib also chipped in a goal to help the Lions post four against a Chelsea defense that had given up two or less in all but one game.

In addition to the impressive offensive play from Briarwood, goalkeepers Savannah Sato, a senior, and Sigourney Bell, a junior, combined for a shutout in goal, marking Chelsea’s second time this season being shutout.

The Lions will close out area play with games against Homewood April 8, Mountain Brook April 19 and Chelsea April 21.

Chelsea still has two left against Homewood, including one on March 22, and one each against Mountain Brook and Briarwood with the two playoff spots from the area still very much up in the air.