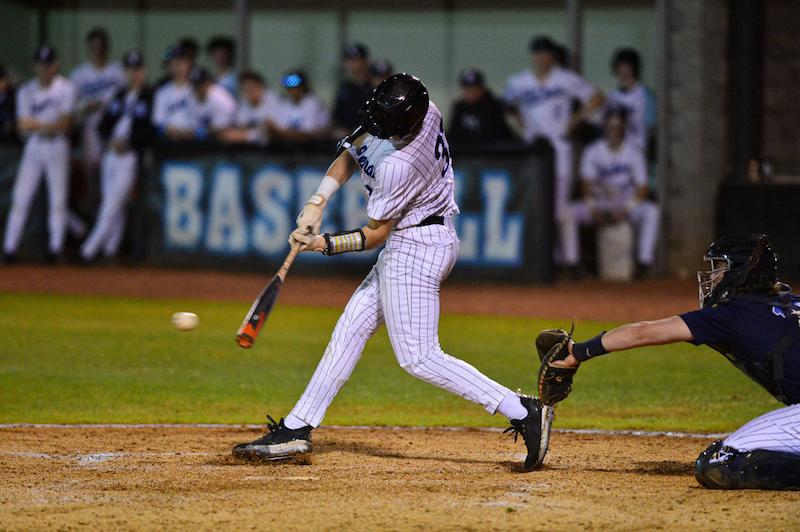 The Helena Huskies pulled off a 10-run win against Calera on Saturday, March 19, to complete the sweep of the area-opening series between the two county foes. (For the Reporter/Jeremy Raines)

HELENA – The Helena Huskies finished off their rain-delayed series with county foe Calera on Saturday, March 19 with a 10-run victory to complete the area sweep.

In the opening series to area play for the two teams, the Huskies entered the game off a walk-off victory Thursday night, and the offense didn’t skip a beat.

Helena scored five quick runs in the first to play from in front early, while the Huskies added six more in the third to take an 11-0 lead. That was more than enough to pick up an 11-1 victory in five innings, as Calera’s only run came in the home half of the fourth.

The Huskies’ big first inning started with two walks in the first three batters, which set the stage for a Connor Gibbs single that brought both home for a 2-0 lead.

Following another walk to Miles Mitchell and a single to Reese Mims, Logan Green doubled to center field to bring home two more for a 4-0 advantage.

Mims eventually advanced to third on the throw, which set the stage for a sac fly from Alex Brown to bring home the fifth-and-final run of the inning.

After a quiet second inning, the Huskies got right back to it in the top of the third.

Mims led off the inning with a single, which was followed quickly by a two-run homer to right field for Mims to make it 7-0.

A walk from Brown was followed by two outs, but the Huskies put together a two-out rally that started with two more walks to Ryan Storey and McGwire Turner.

Gibbs then drove home two more with a single to left field, before two more walks led to a 10th run crossing the plate.

The final run crossed the plate on a balk, which extended Helena’s lead to 11-0 through three innings.

Calera’s only run came in the bottom of the fourth when Matthew Windham walked to lead off the inning and later scored on an RBI groundout.

Helena was led by Green, who finished 2-for-4 with three RBIs on a double and a home run. Gibbs finished with two hits as well and added three RBIs, while Mims also had two hits with one RBI. Scott and Mitchell each had one hit for the Huskies, while Brown finished with an RBI.

On the mound, Logan Barber went the distance, striking out eight and allowing one run on just two hits and two walks.

Calera had hits from Windham and Mac Graham in the loss.