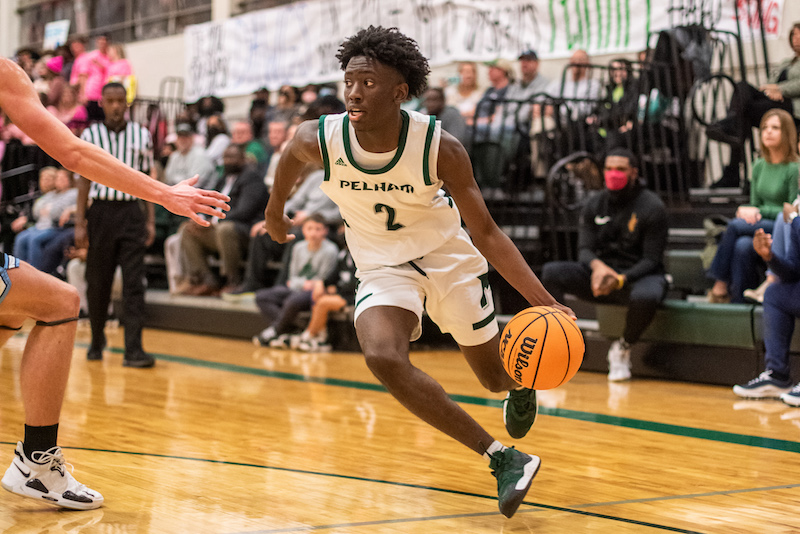 Pelham senior guard Michael Jones earned this year’s Player of the Year award in Shelby County after leading the county in scoring with 23.7 points per game. (Reporter photo/Keith McCoy)

It took four years of hard work for Michael Jones, but after his consistent work ethic and ability on the basketball floor, he will head out as the top player in Shelby County.

Jones, who spent his first three seasons at Montevallo and finished his high school playing days at Pelham this season, put together a remarkable senior season that saw him lead the county in scoring by close to five points per game to earn this year’s Shelby County Player of the Year award.

During his senior season with the Panthers, Jones averaged 23.7 points per game, which beat out Helena’s Josh Williams at 18.9 points per game for the county’s scoring title.

But beyond that, Jones had other aspects that were the determining factor in making him this year’s top player.

Not only was he great at creating his own shot and making deep 3-pointers, but the artistic side of him was being able to draw defenders, yet still find space.

His patience was key in that, which led to him using his agility to edge around defenders, keep them behind him as he worked his way to the basket for a layup or pass to an open teammate.

In addition to his county-high 23.7 points, he finished third in the county in assists with 3.8 points per game, knowing if he drew a defender, someone was open, while he also totaled 3.9 rebounds per game.

Perhaps the most impressive number for Jones, however, came on the defensive end. With his offensive ability, it would have been easy to take it easy defensively, but he ended up leading the county in steals with 85.

He also led the county with 97 3-pointers, and finished the season with 735 points.

All six of those athletes were lethal scorers and important teammates as well, but Jones’s consistent ability over the last four years culminated into a special senior season.

As a freshman, he averaged 10.9 points per game, which set the stage for a bright future.

Now, Jones can add Player of the Year to that list of accomplishments, while he made the All-County team all four years.