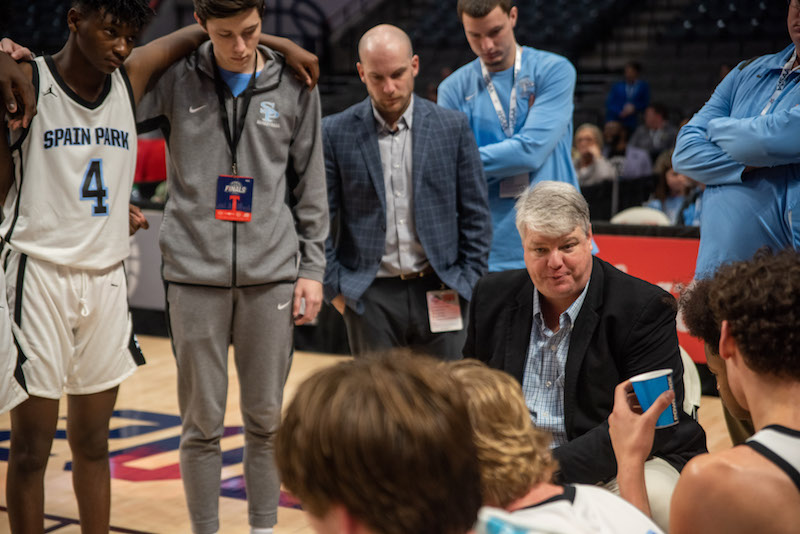 Spain Park head basketball coach Chris Laatsch has been named this year’s Coach of the Year in Shelby County after leading the Jaguars to the Final Four for the second year in a row. (Reporter photo/Keith McCoy)

Heartbroken after coming up short of leading the Spain Park Jaguars to the state championship game following a loss to Enterprise in the Final Four for the second year in a row.

What was running through his mind in that moment was how he let his players down by not leading them to the championship game.

Not on his mind, however, was what he had just helped Spain Park accomplish.

In his fourth year leading the Jaguars, he had officially taken them from 5-22 the year before he took over to a second consecutive appearance in the Class 7A Final Four.

With that effort, Laatsch has been named the 2021-2022 Shelby County Coach of the Year following a 28-8 season. 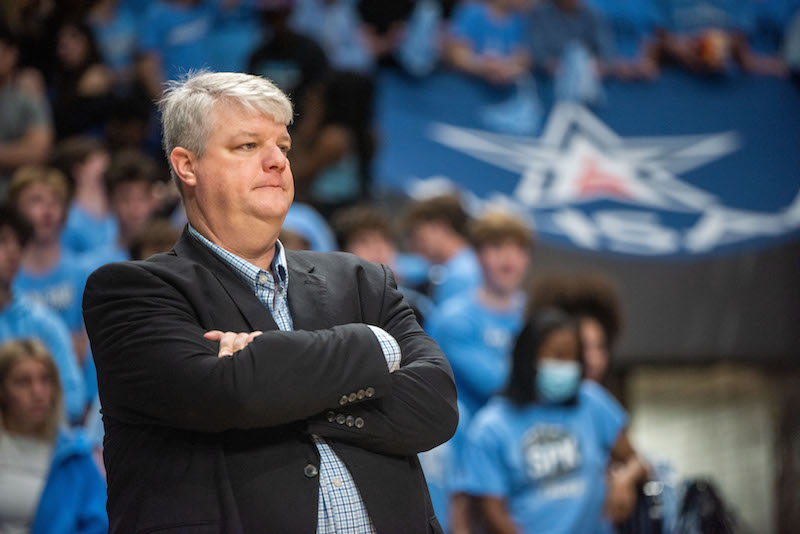 Laatsch was last named the county’s Coach of the Year in his final season at Helena after leading the Huskies to the Sweet 16 in 2018. Now, he has earned that same praise a classification higher four years later at Spain Park.

He was challenged closely by Chris Love, who won last year’s honor. Love led the Oak Mountain Eagles back to the Elite Eight for the third year in a row, as the Eagles fell to James Clements by four points in the matchup.

James Clemens went on to pick up an easy semifinal win, before falling by two points to Enterprise in the state championship game.

That showed just how close Oak Mountain was to repeating as the Class 7A State Champions despite losing last year’s leading scorers and rebounders in Noah Young and Will Shaver.

Pelham head coach Greg Dickinson also led the Panthers back to the Sweet 16 for the second year in a row, giving him that accolade both of his years at the school.

The Panthers finished 27-6 this season, ultimately falling to Spanish Fort by 10 points in the Sweet 16.

But the job Laatsch did at Spain Park was second to none this season, mainly for his ability to get a team featuring several new players bought in to believe they could make another run back to the Final Four.

A big key in that was the leadership he entrusted both Josh Harrington and Colin Turner with.

After losing Cam Crawford, last year’s Player of the Year in the county, as well as the majority of their role players, Harrington and Turner both had to step up as the lone returning starters and seniors.

Because Laatsch put his faith in them, he was not only able to help the younger players fill in the important roles, but those players saw that and were willing to follow the leadership.

The ability to get a group of high school players to come together in such a short amount of time with several different age groups and make a run back to the Final Four was truly special.

It was nothing short of hard work and trust in one another.

The Jaguars have now not only gone from 5-22 the year before Laatsch took over, but they have gone from 8-24 in his first year to records of 18-12, 27-8 and 28-8 the last three years with three consecutive trips to the Elite Eight and back-to-back trips to the Final Four.

That has made Laatsch one of the state’s top coaches, and easily this year’s Shelby County Coach of the Year.