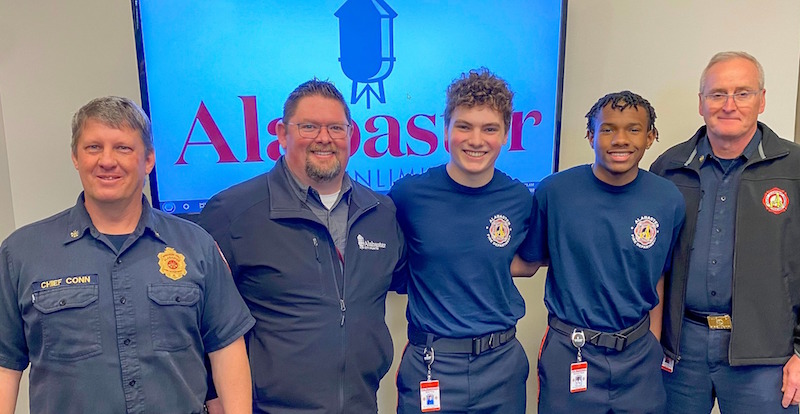 Nate Frey and Devarye Mack were hired as the city’s first two fire interns for the Alabaster Fire Department. The hires are part of a new internship initiative to have students within the city exposed to more career opportunities within city government. (Contributed)

ALABASTER – The Alabaster Fire Department now has two fire interns who will learn about aspects of fire service for the city.

“This is a new program for the city and the fire department with our intent on opening a career path for students from within our city,” said Alabaster Fire Chief Tim Love. “We want to expose them to career opportunities that exist in city government and how great it would be to have personnel that work for the city in which they grew up.”

Nate Frey and Devarye Mack were chosen to serve in the intern roles over the next several months for the department.

Love said there are plans to expand the program into other city departments as they move forward.

“We will expose our fire department interns to the daily operations, tasks and duties, and they will be able to participate to a safe level and experience ride alongs on emergency calls,” Love said.

Love said some of the benefits of the program are that one day, they may be able to hire personnel not only interested in a career in the fire service, but interested in working for the Alabaster Fire Department.

“The mayor has always stressed that the population we have working for the city should reflect the diverse citizens of Alabaster,” said Alabaster Human Resources Director Tracy Worley. “We have one of the best school systems in the state and this fire internship program allows students to learn firsthand the opportunities the city has to offer with the intent to continue to build opportunities for Alabaster citizens to work locally after graduation. The city’s administration challenges department heads to think long-term for strategic development. The fire program is the first of several programs we are working on to meet this.”

Worley said one of the first discussions Alabaster Mayor Scott Brakefield had with the department heads after taking office was on finding ways to partner with the school system to identify and develop the “incredible” talent in Alabaster.

The two interns applied for the positions just like regular employees, and were tested and interviewed using the same grading criteria as a regular employee of the fire department.