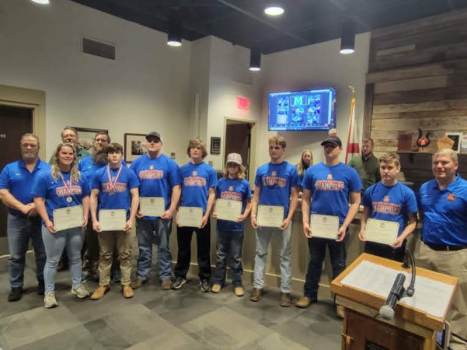 Members of the Montevallo High School wrestling team were honored for their success this season at the Montevallo City Council meeting on Monday, March 14. (Contributed) 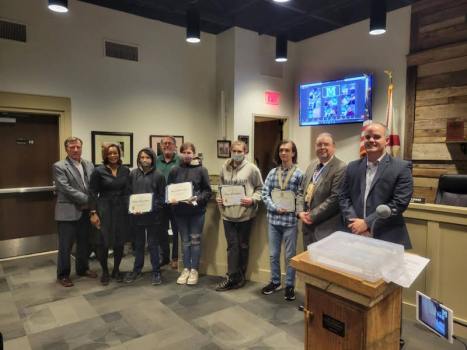 Students who won awards in the Alabama Society Sons of the American Revolution’s essay and brochure education contests were also recognized at the Montevallo City Council meeting on March 14. (Contributed)

MONTEVALLO – The Montevallo City Council voted on several items of new business and recognized local students for their athletic and academic accomplishments on Monday, March 14.

First, the members of the Montevallo High School wrestling team were honored for their successful season under head coach Garrett Langer.

“This team has been very special,” Langer said. “This is the first region championship team. It’s a little history for the wrestling program.”

According to Langer, the team finished the year with a 17-5 record in the 1A-4A classification, and 24-10 overall.

“In our level, we were pretty consistent on our success,” Langer said, adding the team made it to the first round of the state tournament. “To end the year, as a team we finished fifth overall out of 31 teams in 1A-4A, which is the highest finish we’ve ever had.

Next, the council recognized students who will be awarded more than $800 in prize money for their participation in essay and brochure education contests sponsored by the Alabama Society Sons of the American Revolution.

“The three pillars of the SAR are history, patriotism and education,” said Michael Martin, president of the SAR’s Cahaba-Coosa Chapter and a teacher at Montevallo High School. “We’ve got four kids today that exemplify all three of those pillars. Thank you to this wonderful community and these wonderful kids.”

In other business, the City Council approved a rezoning request and a price quote for bridge repairs at a public park.

The request was to rezone about 5 acres of property located at 6166 Montevallo Road from A-R (Agricultural Residential) to B-2 (General Business District) to allow for the use of an existing accessory building as a vehicle repair shop.

Regarding the bridge repairs, the price quote for repairs and maintenance to Orr Park’s main bridge was $4,457.

“The lumber on the flooring plus the handrails too were starting to deteriorate,” Mayor Rusty Nix said. “We want to go ahead and get them replaced before they break.”

City Clerk and Treasurer Steve Gilbert said the price quote was reasonable, and that, when assessed for insurance purposes, the value of the bridge was estimated at $50,000 regarding total replacement.

• Approved to accept the dedication of the street known as Ammersee Lakes Drive from Bagley Properties LLC.

• Approved for vehicles and other city property to be declared as surplus for the purpose of public auction.