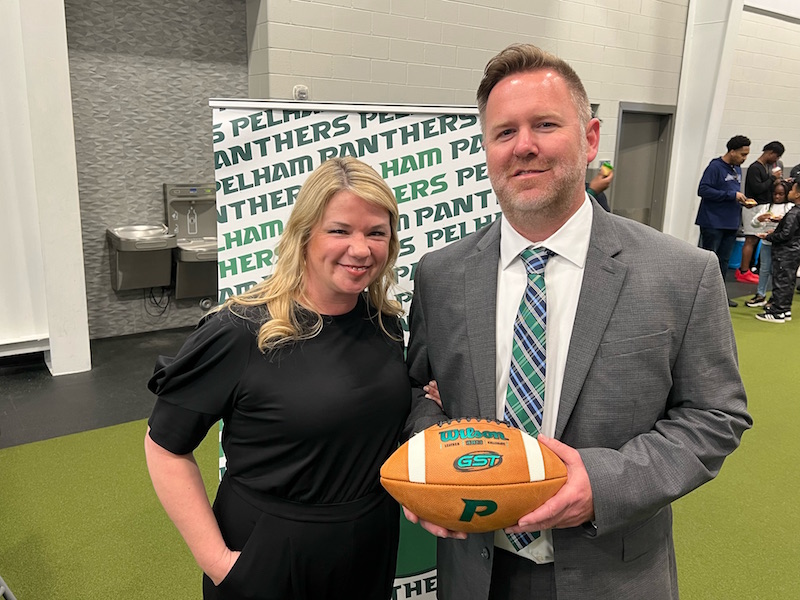 PELHAM – The Pelham Panthers approved their next head football coach at a special called board meeting on Wednesday, Feb. 23 inside the Pelham High School indoor facility.

The Pelham City Schools Board of Education unanimously approved Mike Vickery as the next head football coach of the Panthers.

“It’s been a process that was fun and exciting,” Vickery said after being introduced. “Anytime you have the opportunity to work for really good people, a really good situation, a really good system with emphasis on extracurricular and doing what’s best for young people to be successful, you definitely get excited about that opportunity.”

Vickery went a combined 24-38 in his time leading the Jags at the 6A level, competing against some of the best teams in Class 6A along the way.

The last two years, he led Northridge to back-to-back winning seasons of 7-4 and consecutive playoff appearances.

Both teams started the season 6-0 before losing four of five down the stretch, including difficult first-round playoff games.

Vickery has taken the Jaguars from 10-30 his first four seasons to a combined 14-8 the last two seasons as contenders for the Class 6A, Region 4 Championship.

Hueytown and Hillcrest-Tuscaloosa, who have made deep playoff runs the last two years, were the only two teams to edge out Northridge in the region standings the last two seasons.

He also spent 12 years at Daphne as an assistant coach before getting his first crack as a head coach.

During Vickery’s tenure at Daphne High School, the football program won or shared 10 Region Championships and participated in two Class 6A Championship games, earning the 6A State Championship in 2010 working under his dad and head coach Glenn Vickery, who went 125-52 in 12 seasons.

Now, Vickery will take on the task as the next Pelham head coach, and he said he sees the potential of what could be.

“I’ve had an opportunity to watch Pelham grow and get better and better,” he said. “The kids play hard. They really encompass everything we want out of our football player. The sky is the limit for a place like Pelham. The school system is willing to do what it takes to take this thing to new heights.”

Vickery added that building relationships will be one of the most important things for him when it comes to his players and what they can expect out of him.

“I’m big on relationships,” he said. “It’s about working and showing what can be done through hard work, being here, being present, being in the community, being at events, just being a part of their lives. All we’ll ever ask them to do is be the best version of themselves, work as hard as they can, leave it all on the field, in the weight room and in the classroom, and good things will happen.”

Athletic Director and Pelham High School Principal Kim Kiel was big in heading the search along with Superintendent Dr. Scott Coefield and future Superintendent Dr. Chuck Ledbetter. Kiel said Vickery easily stood out as the top candidate during their search.

“We had a really extensive search and a lot of fantastic candidates, but coach Vickery was above and beyond all of our candidates,” she said. “Coach Vickery is a man of character, a man of integrity, has a great football background, works tirelessly to make sure the young men in his career have fantastic opportunities in the classroom, in the locker room and on the field. Being the perfect fit for Pelham, that’s what Pelham wants, that’s what Pelham expects and that is the epitome of what Pelham is. He will be a fantastic addition to an already great Panther family.”

Vickery also pointed to replacing Tom Causey as a big reason for the success, saying he could build off what Causey accomplished in helping set the table for a bright future at Pelham.

Causey, who retired from Pelham back on Feb. 11 to move to Georgia and take over as the new head coach at Ola High School, spent seven seasons coaching at Pelham and 22 years as a head coach in the state of Alabama.

During his 22-year career leading Pelham, Demopolis, Andalusia and Dallas County, Causey finished with an overall record of 159-121, including a 13-17 record in the playoffs after leading 18 of his 22 teams to the postseason.

In his time at Pelham alone, he helped take the Panthers to the playoffs four times in the last five years, including the last two years in a row. He also led the Panthers to their first region title since 2006 during the 2020 season and just their third in school history following an 8-3 record.

He went 33-41 as Pelham’s head coach, including two 7-4 seasons and one 8-3 season during the last four years, as he built the program and tried to change the culture.

“Following a guy like Tom Causey and the respect I have for him and his character and the integrity he has, it was a perfect storm of events that I thought I needed to try for the opportunity to get in on the job,” Vickery said. “We’re going to do the best we can moving forward and working hard to take what coach Causey started to the next level.”

Vickery met with parents and players after the special meeting and will hit the ground running as the team’s next football coach. Vickery has a wife, Lynsey, and two children who are looking forward to the move as well.