Bailey throws perfect game for Helena in win against Calera 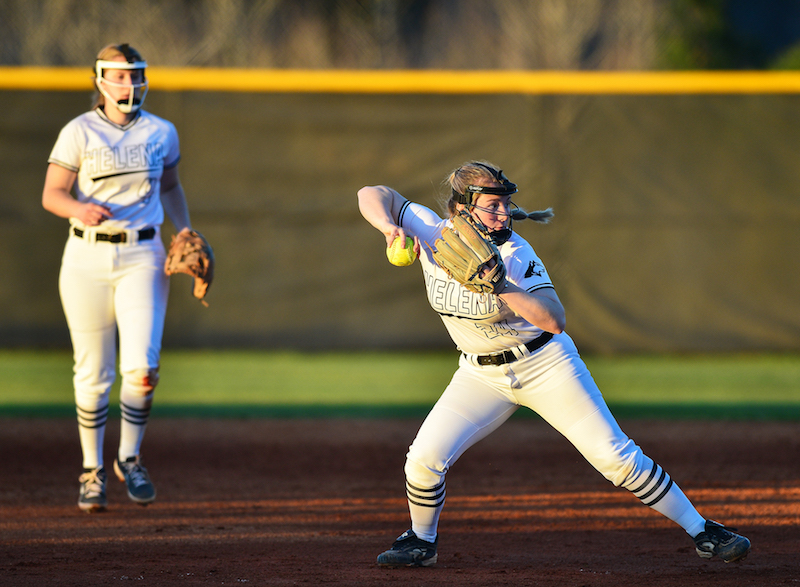 The Helena Huskies got a perfect game from pitcher Cam Bailey in a 10-0 win against Calera on Monday, March 21. (For the Reporter/Jeremy Raines)

HELENA – It was a truly perfect night for the Helena Huskies on Monday, March 21, as they not only picked up a 10-0 victory against county foe Calera, but did so on the arm of Cam Bailey’s perfect game.

The starting pitcher for the Huskies was flawless in the circle, giving up no hits, walks or runs and striking out nine in the shutout win and perfect game, as the Huskies also committed no errors.

Impressively, Bailey struck out half of the batters she faced in the game.

With her dominant effort, the offense was able to feed off of that in a strong effort as well.

Following Bailey’s first of six straight 1-2-3 innings in the top of the first, Presley Lively stepped in to lead off at the plate in the home half and quickly drove a ball over the wall in center field to set the tone for the night.

She put the Huskies on top 1-0 before Bailey helped her own cause with an RBI double later in the inning. That was quickly followed by an RBI single from Sara Ezekiel to put Helena on top 3-0 through the first inning.

The Huskies then loaded the bases an inning later, and while the damage was minimized, they still added one more to their lead to make it 4-0.

The next two innings were quiet, but Helena didn’t have to have big innings with Bailey’s impressive outing.

Then, in the fifth and sixth, the Huskies were able to put it to rest.

In the bottom of the fifth, Bailey and Ezekiel laced back-to-back hits before Bella Holiday stepped in with a two-RBI double.

After a second out was recorded, Haley Morris then added a two-run home run to make it 8-0 through five innings.

The Huskies then loaded the bases again in the sixth inning, which set the stage for Ezekiel to end the game with another two-RBI double that gave Helena the 10-0 win an inning early.

Ezekiel finished a big game going 3-for-4 at the plate with three RBIs, while Holiday went 2-for-3 with two RBIs. Morris added two RBIs on her home run, while Bailey posted two doubles with an RBI. Lively also added two hits and an RBI, while Alana Scott and Alex Erwin both finished with two hits in the win.