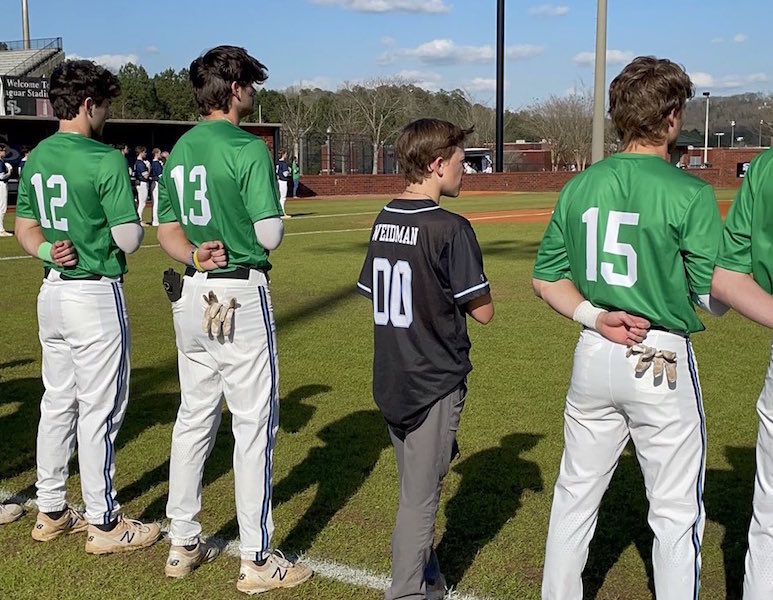 The Oak Mountain Eagles and Spain Park Jaguars split a doubleheader on Wednesday, March 23, as the two teams honored the life of Braxton Weidman. (Contributed)

HOOVER – It was almost fitting that the Oak Mountain Eagles and Spain Park Jaguars split their doubleheader series with one another on Wednesday, March 23, as they celebrated the life of Braxton Weidman.

Growing up in Hoover and a student at Greystone Elementary, Braxton would have been a future Spain Park Jaguars, but he played the majority of his little league baseball with Oak Mountain at Heardmont Park before passing away from a battle with cancer on Feb. 1.

Because of that, he and his family were close with both communities, and on Wednesday night, the two came together to host a #BeLikeBrax youth night that celebrated his legacy with many in attendance wearing his favorite color of green.

And not only did each team pick up a win, they did so in thrilling battles to put the cherry on top of a special night at Spain Park High School.

The opening game went into extra innings with a run in the top of the eighth giving Oak Mountain a 7-6 win, while the second game saw the Jaguars take a 2-0 lead through three and go on to win 3-1.

It looked as if the Eagles were going to run away with it after jumping out to a 6-0 lead through two innings of play.

In the opening inning, Oak Mountain put together four hits, including two doubles.

Taylor Bush drove home the first run on an RBI single, while Maddox Macrory drove home another with a sac fly to make it 2-0. Then, following a single from Nick McCord, Conner Moore laced a line drive to center field for a double that brought home two runs for a 4-0 advantage through one inning of play.

In the second inning, after two quick outs were posted, Davis Gillespie walked to set the stage for a two-run home run from Bush a batter later that extended Oak Mountain’s lead to 6-0.

Despite no momentum through four innings at the plate, the Jaguars settled in on the mound in the third, and the offense followed in the bottom of the fifth.

They matched the first inning of the Eagles with a four-run fifth that included an RBI single from John Robert Thompson, an RBI groundout from Josh Harrington and a two-RBI single from Evan Smallwood.

Now down by two, Spain Park capitalized on the momentum shift with a quick 1-2-3 inning in the field before coming back to the plate in the bottom of the sixth to tie the game.

The Jags got three consecutive hits from Jacob Tobias, Ryan Cole and Clay Spencer. Tobias singled, which set the stage for back-to-back doubles from Cole and Spencer, the latter of which drove home both baserunners to even the game at 6-6.

From there, a scoreless two innings ensued, forcing extra innings.

But that quickly changed in the top of the eighth thanks to a two-out rally from the Eagles.

A double from Kevin Jasinski and a walk from Grant Rakers kept the inning alive.

Then, a single from Andrew Hunt drove home what became the game-winning run in a 7-6 victory.

In the bottom of the seventh, Moore got the Jags to go down 1-2-3 to preserve the win.

Bush led the Eagles with a 2-for-4 game featuring three RBIs and two runs scored, while Moore finished with a hit and two RBIs. Hunt also added a hit and an RBI, while Gillespie, Matthew Heiberger, McCord and Jasinski all picked up one hit.

On the mound, Macrory got the start and went 5 2/3 innings allowing five hits and six runs, two of which were earned. He also struck out four. Moore then finished off the final two innings, allowing no hits, walks or runs and striking out three.

Spain Park was led by Smallwood and Spencer with one hit and two RBIs from each of them, while Thompson added a hit and one RBI. Harrington also finished with an RBI.

In the second game, the Jaguars were able to take an early 2-0 lead, scoring one run in the second and third.

The first run came on an RBI double from Spencer, who drove home Tobias after he doubled earlier in the second. Then, an inning later, it was an RBI single from Cole Edwards, who made it 2-0.

Oak Mountain cut the deficit in half with an RBI groundout from Jasinski in the top of the fourth, but the Jaguars responded with an insurance run on an RBI single from Tobias in the bottom of the fifth.

In a lower-scoring game, that became enough to fend off the Eagles.

Tobias finished with two hits and an RBI in the win, while Edwards and Spencer each added one hit and one RBI. Smallwood, Michael Glick and Harrington all finished with one hit.

Lucas Thornton got the start and win on the mound, going six innings and allowing one unearned run on two hits and four walks while striking out five. Smallwood got the save in the final inning, picking up one strikeout.

Oak Mountain got hits from Gillespie, Bush and Macrory, while Jasinski had the lone RBI.

Heiberger had an impressive 4 1/3 innings on the mound. He gave up six hits and three runs, but he also struck out 10. Driskill finished the game off, allowing one hit and a walk and striking out two more.