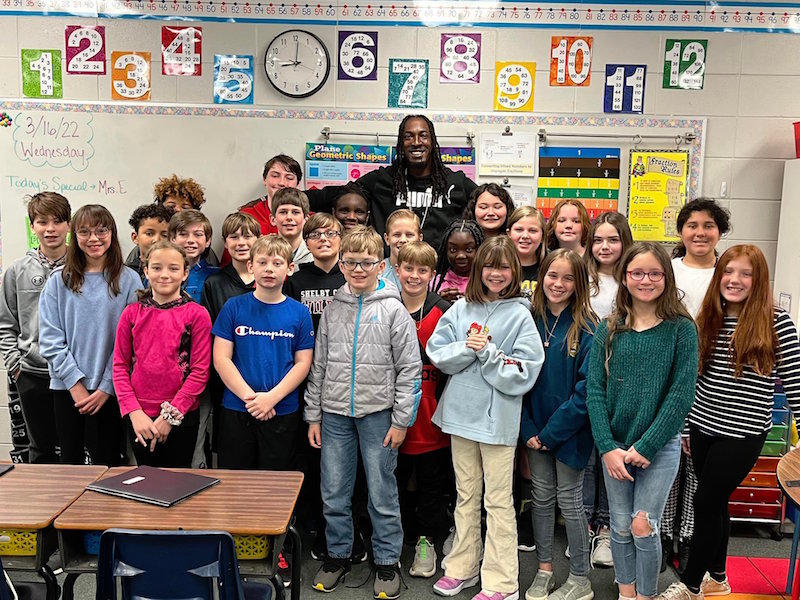 Former NBA and Alabama basketball player Gerald Wallace spoke to students at Elvin Hill Elementary on Wednesday, March 16 about promises he kept. The event was part of this year's theme based on the book “I Promise” by LeBron James set up by School Resource Officer Sasha Knighten. (Contributed)

COLUMBIANA — Students at Elvin Hill Elementary are learning all about making goals from basketball greats—not goals on the court, but in school and life.

Childersburg native and former Alabama and NBA star Gerald Wallace visited the school on Wednesday, March 16 and spoke to Kara King’s fifth grade class about keeping promises. His main point was that hard work and effort will take a person further than talent alone ever will.

The event was part of this year’s theme at Elvin Hill, which is based on the book “I Promise” by LeBron James—a book that encourages kids to keep several key promises, such as to stay in school, do one’s best and never give up. The book is central to the concept of the I Promise School, a public elementary school in Akron, Ohio supported by the LeBron James Family Foundation.

“Basically, (LeBron James’) mission is to make sure they all graduate, and so that’s basically what Elvin Hill did as in they have dedicated themselves to making sure the kids here graduate and stay on track,” Knighten said. “I try to go into the classroom twice a week until we learn all the promises, basically, and they recite them each morning up until the point where they have learned all 10 promises.”

Different speakers are visiting the school to talk about certain topics pertaining to the different promises featured in the book. At the end of the program, a graduation ceremony will be held for the students, Knighten said.

“It just so happened that Gerald agreed to come in and speak about the promises and about his life,” she said. “The kids have dedicated themselves to the promises. For the most part, everybody has participated, and they plan on focusing and keeping them. They plan on finishing school.”

Knighten added that teachers are playing a big role in helping to encourage the students in their journey. In turn, Principal Courtney Madison, Knighten and others are encouraging the teachers throughout the year as part of the theme.

“It all starts here,” Knighten said. “We want to see them finish.”