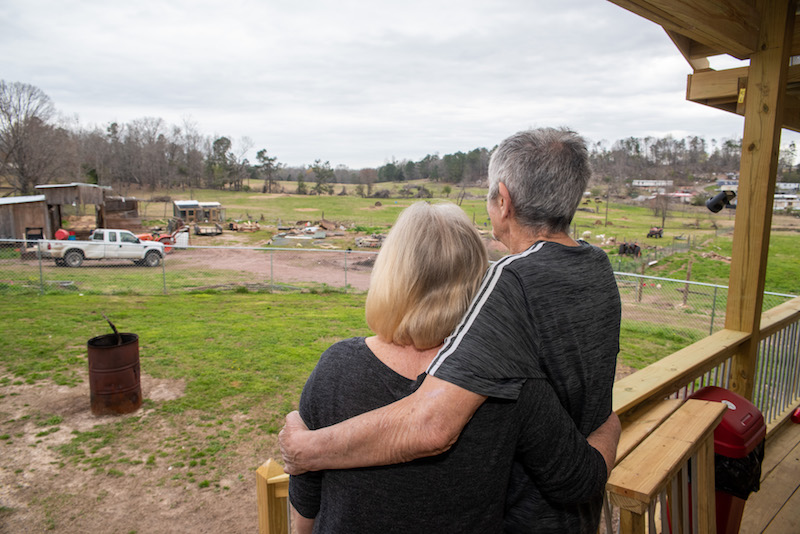 From their new back porch, Gayle and George Nix look out toward an area on their property where a year earlier they were buried under pieces of their home 100 yards away following an EF3 tornado. (Reporter photo/Keith McCoy)

COLUMBIANA – Sitting on a back porch that didn’t exist a year ago, George and Gayle Nix gaze wondrously toward the pasture behind their doublewide trailer.

With a look of deep reflection covering their face like a mask, they look directly toward an area 100 yards away where their trailer landed after being lifted off the ground and destroyed by a tornado on March 25, 2021.

Part of a day that saw two EF3 tornadoes barrel through Shelby County, the Nixes remarkably lived to see another day after being pulled from the rubble that was formerly their home.

Sadly, the couple lost two rescue dogs, several horses, their pig Wilbur and other animals, while their farm suffered other devastation to barns and equipment.

That, in addition to the two narrowly surviving with multiple injuries and lengthy hospital stays, made for the most difficult year of their life.

“It’s been a bad year,” Gayle said. “Even the beginning of this year has been bad. It’s starting to get better, but it hasn’t been easy at all.” 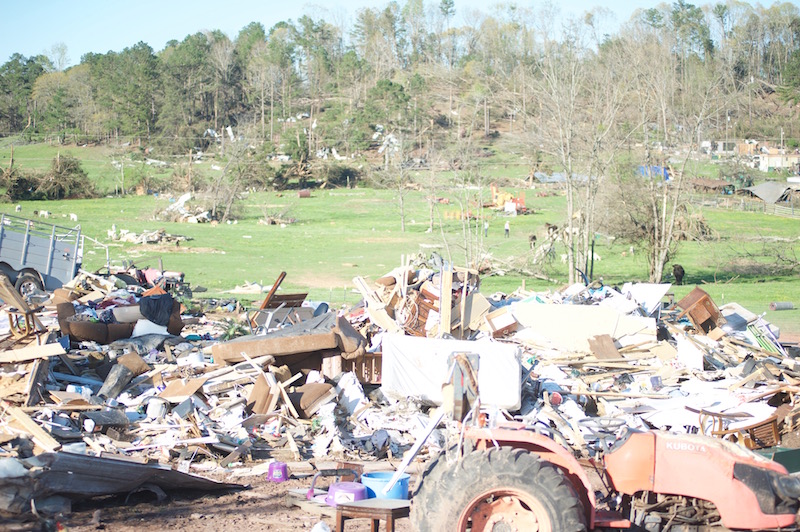 Returning home from a doctor’s appointment to get a biopsy on George’s lungs, George laid down for a nap when Gayle got a call from a neighbor saying a tornado was headed their way.

“I went and woke George up and said, ‘Hey, we need to go get in the closet. There is a tornado close by heading this way,’” Gayle said. “I ran and grabbed helmets for both of us and we got in the closet.”

Just as they slipped the helmets on their head, George said, “Here it is. It’s here.”

“It felt like a freight train lifting right where we were, just lifting it up off the ground,” Gayle said.

The last thing Gayle remembered saying before waking up 100 yards away was, “Jesus, Jesus, Jesus.”

“You could feel it going over, and all of a sudden it was just black,” she said. “I don’t know if things hit me, and I’m sure they did, I didn’t know where George was, I didn’t know where my dogs were who were in the closet with us. Next thing I know, I hear somebody yelling and it’s the neighbors.”

Originally, the neighbors, who included Casey, Nathan, Susan and Gary Crumpton, were yelling for George, who they were able to locate first.

George, who was now propped up on a hay bale, told the Crumptons that Gayle was trapped under the rubble.

The group immediately started yelling Gayle’s name, but with rain still falling and the animals on the farm making noise from the storm as well, they got nothing in response.

Wedged nearly 8 feet underneath the rubble of their former home, Gayle started trying to push her way free.

That’s when she started yelling for help.

Then, in a moment of calmness, it became quiet and they heard a soft call for help from under the mountain of debris.

“I started digging but dug in the wrong spot at first,” Nathan Crumpton said. “We ended up digging again near where George was found. She ended up being deeper down than him right next to where he was in a pocket.”

Found bent over a 2-by-4-foot beam, Gayle said she doesn’t remember much from there as shock started setting in.

She was loaded onto a door blown off from the storm as a makeshift stretcher and just remembers being told not to go to sleep because of her injuries.

Emergency crews couldn’t get to the property because of trees blocking roadways, but the Crumptons loaded them onto an ATV and took them to a spot where the ambulances could pick them up, leaving behind a destructive and heartbreaking mess.

The path to recovery, however, went much deeper than those injuries. 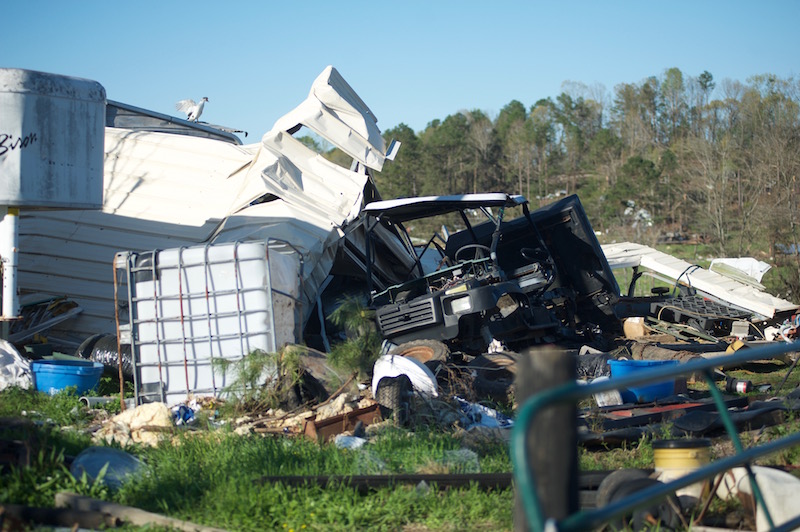 A long road to recovery

Following the storm and their remarkable survival, Gayle spent a little more than a week in the hospital before being released and moving in with family, but George’s path to recovery was much longer.

George said he was basically unconscious for the next month after the storm, while he was on a ventilator that entire time.

After his condition started to improve, he had to be taken to rehab for another month to get the tracheostomy tube out and teach him to speak and eat again.

Then, as he started to improve those daily functions, he was sent to another rehab to learn to walk again and to be able to do things himself.

That, however, was just the first hurdle for George to overcome during the past year.

On oxygen since the accident, he has been in and out of the hospital for irregular heartbeats, pneumonia, COVID-19, respiratory issues and fluid around his lungs.

“He just got out of the hospital hopefully for the last time about three weeks ago,” Gayle said. “They drained fluid on his lungs and they did an ablation on his heart. He was in heart failure. He’s never had heart problems in his life. This all caused it.”

George said it all just spiraled from the day the tornado happened.

“It sounds bad, but there were times I was just about ready to give up,” George said. “It wasn’t easy at all. It was a painful and dark time.”

He ended up with pneumonia three different times while he was in the hospital, but somehow, he fought through each different hospital stay, largely because of Gayle.

“For a long time, I really didn’t think I was going to make it,” George said. “I really didn’t. Even up to before the ablation, I was still concerned. Yet, I wanted to be out long enough that I could get everything situated like I needed it for her. That was most important on the list, to make sure she would be OK. I’ve had a lot of things happen in my life, but nothing will come close to any of this. None of it.” 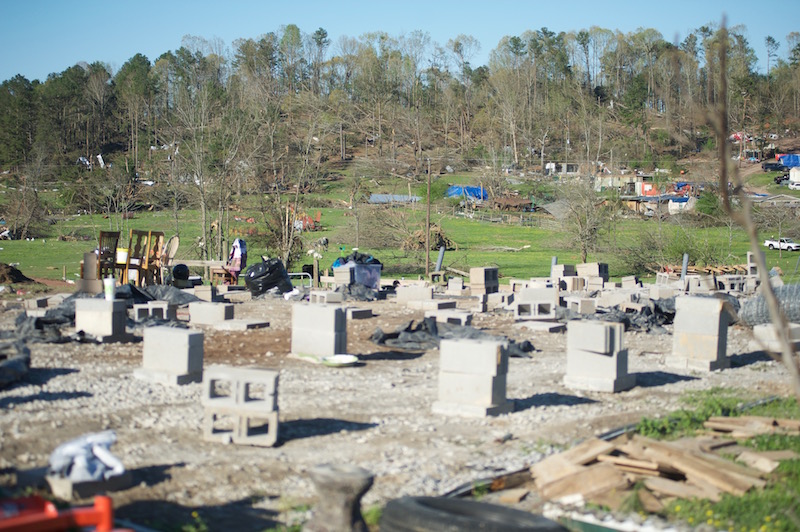 Help on the farm

Beyond the physical health trauma that was placed on their shoulders, the two also needed a new home on their property and had a farm that needed to be cleaned up and animals cared for, including horses from their G&G Paso Fino Rescue Farm.

And that’s where the help of family, friends, neighbors, organizations, churches and many who the Nixes didn’t know came together to help in their biggest time of need.

“God has been good to us going back to everything,” George said. “We’ve had close to 60 people here doing cleanup work.”

The Nixes had approximately 45 horses on the farm at the time of the tornado, and after seeing what happened, the Paso Fino Horse Association stepped in to help.

“They stepped up and found foster homes and people who wanted to buy the horses,” Gayle said. “We still have 11 horses and some more will come back to us, while some won’t.”

They association also raised $12,000 to help feed the horses on the farm and put fencing back up, while they helped with hay and more.

“We couldn’t have fed them,” George said. “We lost everything. We had four barns, one of them brand new. It had never been filled up for the first time before it was destroyed. Our horse barn, half of it is still gone. The first time I came up here, I did not recognize the place at all. It wasn’t my home. Nothing even looked familiar four months later.”

Gayle said he wouldn’t have been able to handle seeing the farm right after the tragic day.

“He saw it when all of the debris was gone. I don’t know if he could have handled it,” she said. “It was hard for me to see all the house debris, furniture and everything we had worked for so hard, gone.”

But with the help of the horse association, donations from churches, family and friends, the farm was cleaned up and returned to as close to normal as possible.

“It was overwhelming how people saw our time of need kind of as their own, or they sympathized with us and knew we needed these things to get back our lives,” Gayle said.

The path to getting the farm back up and running wasn’t easy, losing several animals and relying on a lot of hard work from others, but their property was eventually restored to as close to normal as possible.

Animals continue to graze the property, and the Nixes have their happy place back.

“This land has been our life,” Gayle said. “It has been our dream. Without all of this, there isn’t much else to live for aside from our kids and grandkids. That’s how important this place has been to us.”

One of George’s first memories back on the farm after returning home was when his granddaughter took him around to visit every animal.

“I talked about that for the next two weeks,” he said. “It just meant so much to me. Gayle and I have spent so much time out here with our animals. It’s our happy place.”

But there was still a void to fill—a home on the property. 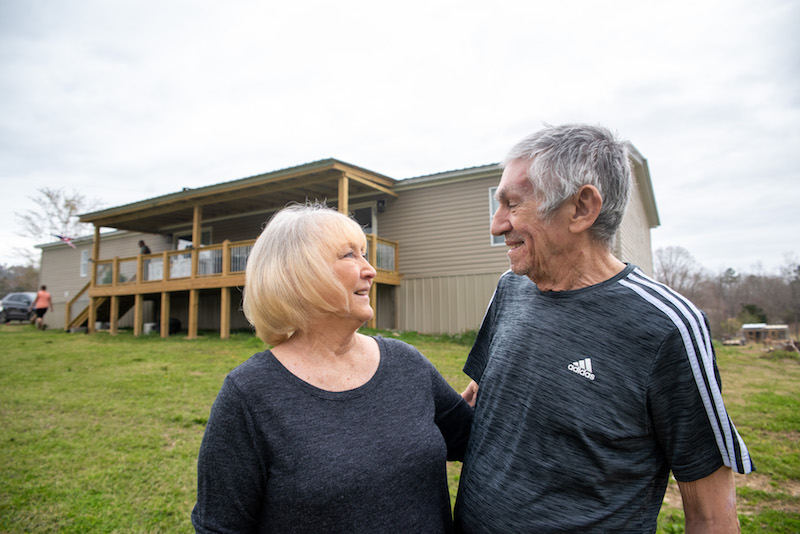 A place to call home

With insurance money not enough to cover the cost of replacing their former trailer, George and Gayle were unsure if they would be able to put a home back on the property.

Months went by with George in and out of the hospital, Gayle living with family and the two eventually using a rental property with a smaller place on it to fill the void.

Both quickly said no, emphatically, when asked if they thought they would be sitting in their home on the property a year later.

“I didn’t even know if we would have the money to get anything, and we did, it was just going to be a small trailer,” Gayle said.

That, however, changed with one phone call from the Shelby Baptist Association.

They found an abandoned mobile home on a piece of property that needed to be moved so the land could be developed.

It took a while to find somebody who could move the home from Chelsea to Columbiana, but the Baptist Association paid for the move and paid for hookups.

“Without their help, we wouldn’t have this home,” Gayle said.

The home did need a lot of work, but that is where the insurance money was able to help.

Gayle and her daughter helped gut the place, while they also worked with contractors to help put a new roof on and finish other work, including a front and back porch.

“It has turned out to be a beautiful home,” Gayle said. “It’s the same size, but it feels so much bigger because of all the work we were able to do.”

George even joked that the custom shower built by Gayle was big enough to have Thanksgiving dinner in.

Just to have a place to call home on their property, however, was more than enough for the two, and something they credit God and their family for helping accomplish.

As for the events of the last year and where they currently stand, the two are as healthy as they’ve been since being dug from the rubble, while they have also grown closer together because of the tragedy.

“It’s been a trip, and I hate to say this, but I think the whole tragedy brought us closer,” Gayle said. “We talk more, we communicate more, we laugh more. It’s really brought us together a lot more than I would have ever imagined. I think now, we can truly say we are best friends.”