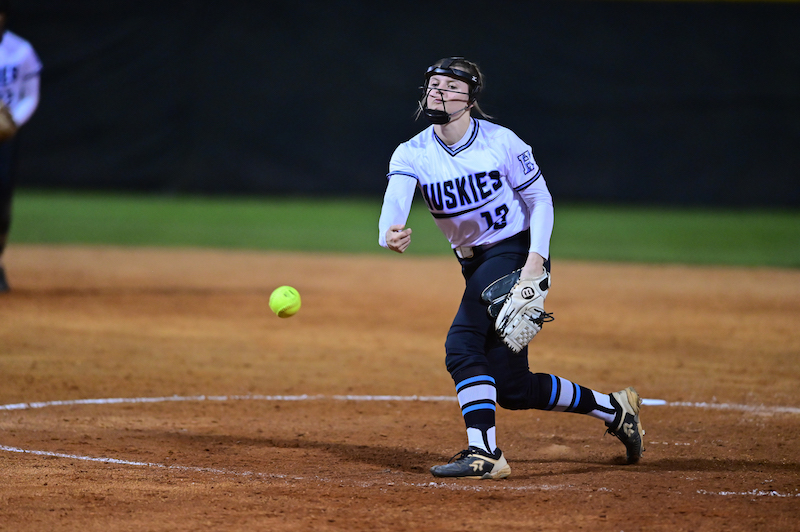 The Helena Huskies improved to 3-0 in area play on March 24 thanks to a 10-1 victory against rival Pelham. (For the Reporter/Jeremy Raines)

HELENA – Helena’s dominant start to the season continued on Thursday, March 24 in a home matchup against rival and area opponent Pelham.

The Huskies, who had already beaten Chilton County 15-0 and Calera 10-0 in area play, notched their third area win with at least 10 wins, downing the Panthers 10-1.

With that, Helena improved to 3-0 in area play, beating the three area opponents by a combined score of 35-1, and 18-3-3 overall on the season.

The Huskies took command of the game early against their rival, scoring seven in the first, which was more than enough with another dominant effort in the circle.

This time, it was a combined effort from both Cam Bailey and Victoria Mauterer, as the two combined for 11 strikeouts and just one hit, one run and one walk.

Bailey pitched the first three innings of the game, allowing no hits and striking out seven just days after tossing a perfect game. Mauterer then finished off the area win by allowing one hit, one walk and a run, striking out four over the final four innings.

That made it 10-0 through three innings, which became enough in the win.

Pelham, however, did score a run in the top of the fourth on a home run from Jordan Young to prevent a 10-run rule loss.

Bailey led Helena at the plate with a 3-for-4 game featuring two RBIs, while Scott finished 2-for-3 with two RBIs. Holliday also finished with two RBIs on one hit, while Morris and Powell each added one RBI and one hit.

Presley Lively, Ann Marie Stanbridge, Alex Erwin, Mary Beth Allen and Grayson Burnett all had one hit, while Elise Dufour had an RBI.