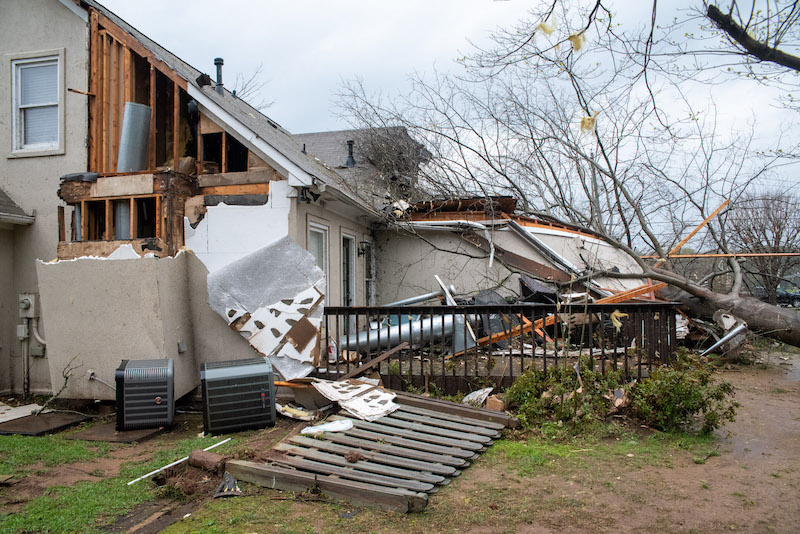 On March 25, 2021, an EF-3 tornado left extensive damage in multiple areas in Shelby County, including the Alabama 119 corridor. (File)

NORTH SHELBY – Huddled in her storm shelter with her son, daughter and grandchild, Lee Fogle could only count the seconds and listen as an EF-3 tornado barreled through her community on Alabama 119 on Thursday, March 25, 2021.

“I remember my son telling me to count backwards from 40 when I could hear it,” Fogle said of the tornado. “By the time I got to about 10, it had passed over.”

Like many other Shelby County residents, Fogle had heeded the warnings in weather forecasts leading up to March 25 and knew the chance of dangerous storms developing that afternoon was high.

Fogle runs a daycare in her home for local teachers’ children, but that week happened to be spring break for Shelby County Schools, meaning the daycare was closed.

However, Fogle’s daughter and six-week-old grandbaby had come from Georgia to visit her that week, and Fogle’s son ended up driving to her house to shelter with them during the tornado.

“I did not have children here which was a blessing, but I had my own children here,” Fogle said. “I was a nervous wreck because that baby was in there.”

Fogle said she has long been afraid of severe weather, as has her daughter, who was a student at the University of Alabama during the deadly tornado outbreak on April 27, 2011.

“I’ve always watched the weather,” Fogle said. “I’m definitely more worried about it hitting when I have daycare operating.”

On the morning of March 25 last year, Fogle went to the grocery store for extra supplies in case she lost power later in the day.

She called her son and told him to come to her house since she has an underground storm shelter, a feature that was already a part of the house when she bought it in 2006.

“It’s definitely a good thing to have,” Fogle said, “But it’s still scary in a storm shelter.”

The long-track tornado started in the northwestern portion of Shelby County and left a path of damage in Helena, Pelham, Alabama 119, the campus of Indian Springs School, Eagle Point, U.S. 280, Greystone and Shoal Creek before making its way out of the county.

All Fogle and her family could do was wait as the tornado moved along the 119 corridor, causing damage in her neighborhood near Heardmont Park in a matter of seconds.

When they emerged from the storm shelter, they saw the home’s doors had been blown open and their cars had been destroyed.

Her neighbors had plenty of damage as well, but Fogle said she didn’t hear of anyone being injured during the storm.

“I was envisioning coming up from that storm shelter and there being nothing based on how loud it was,” Fogle said. “My house had to have an exterior makeover, but other than that, it was mostly cars, trees and fences. We did not have the damage that Eagle Point had. They were really hit hard.”

Seeing her neighbors, and even strangers, come together to help each other in the aftermath of the tornado brought tears to Fogle’s eyes.

“The minute I came out of that storm shelter, my phone was ringing, and people were asking, ‘What can we do?’” she said. “We just all started rallying to help each other the best we could. Family, friends, my daycare parents and people I didn’t even know came and helped us do so much. We never would have gotten as much done as we did if it hadn’t been for that.”

Fogle keeps an emergency bag on hand and the storm shelter ready for any severe storms that might hit during daycare hours.

She monitors the weather as diligently as she did before the March 25 tornado—and she urges others to do the same.

“I’m constantly reminding people to watch the weather,” Fogle said. “Things can change in a blink.”