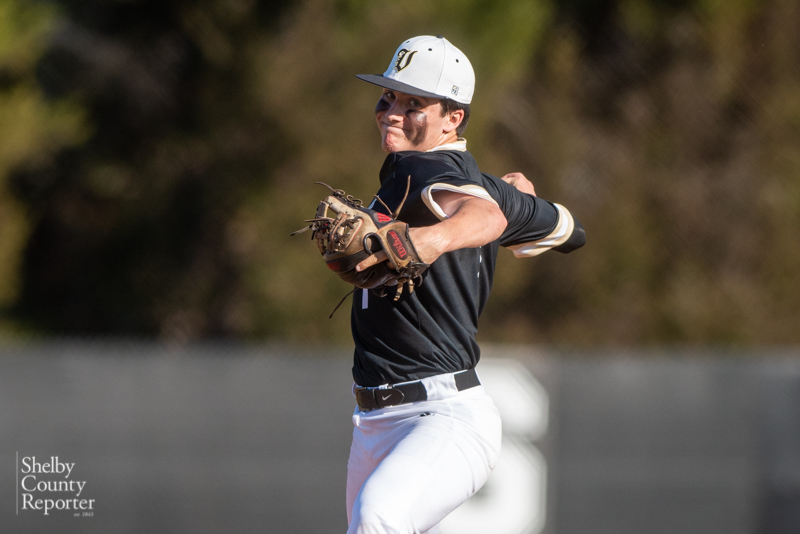 The Vincent Yellow Jackets got a no-hitter from Aiden Poe to take down Montevallo 10-0 in five innings on March 24. (Reporter photo/Keith McCoy)

Taking on county foe Montevallo, the Jackets not only used strong bats, but got an impressive outing from freshman Aiden Poe on the mound in the form of his fits no-hitter of the 2022 season.

Poe went all five innings of the game, walking two batters but giving up no hits or runs with three strikeouts to help the Yellow Jackets notch the win.

His presence on the mound was important, as it allowed his teammates to be patient at the plate after a slow start.

With that, rather than playing from behind, Vincent grabbed a 1-0 lead in the top of the first, and despite offensive struggles through the third inning, the Jackets eventually put it all together to pull away.

The Yellow Jackets scored six in the fourth and three more in the fifth to make it 10-0 and eventually grab a 10-run rule win through five innings of play.

At the plate, Hunter Burnette led the way, finishing 2-for-2 with two RBIs and two runs scored in the win.

Camden Cobb also had two hits, including a double, while he finished with one walk, one RBI and two runs scored. Eyan Davis joined Burnette with two RBIs on one hit, also scoring a run.

Beyond those three, Zac Carlisle, Poe and Myles Fincher all finished with one hit and one RBI in the victory. Fincher and Carlisle both scored two runs as well.

Easton Fields and Grayson Gulde each added hits for the Yellow Jackets to round out a dominant 10-hit, 10-run performance at the plate.

With the win, Vincent improved to 11-4 on the season.