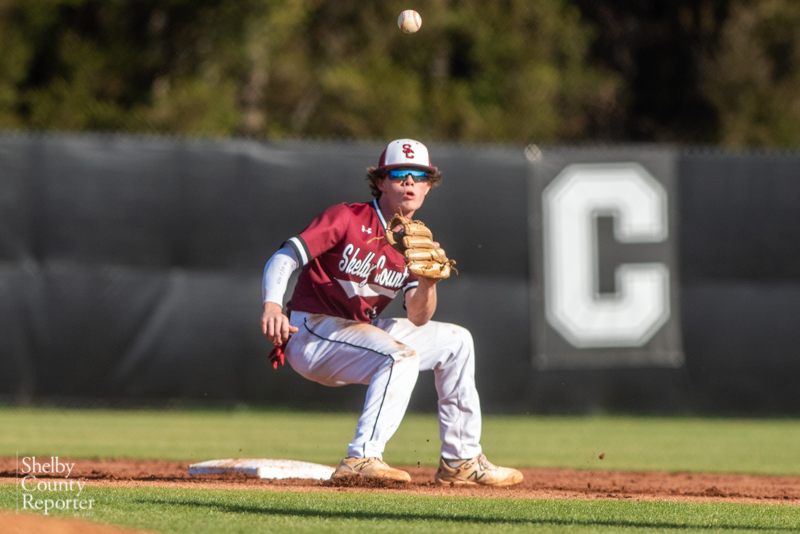 The No. 1 Shelby County Wildcats improved to 15-1 overall and 2-0 in area play with a series sweep of Central-Clay on March 21 and 24. (Reporter photo/Keith McCoy)

It has been a routine year so far for the Shelby County Wildcats as the No. 1 team in Class 5A, and during the week of March 21, they not only added two more wins, but two important area wins.

Taking on area foe Central-Clay County to open area play on Monday, March 21, and Thursday, March 24, the Wildcats swept Volunteers by a combined score of 22-8.

Shelby County took game one of the series with ease in a 9-2 victory, while the Wildcats came back three days later and used more offense to notch a 13-6 victory to improve to 2-0 in area play and 15-1 overall this season.

In the opening game of the series, Shelby County used a fast start to build a lead and never looked back.

The Wildcats scored two in the first and five more in the second to take a 7-0 advantage, and they were never threatened from there.

They eventually added two more in the fourth to make it 9-0 through four innings, while Central-Clay didn’t score until the sixth inning, posting the team’s only two runs of the game.

Austin Wilson was big at the plate for Shelby County in the win after finishing 2-for-2 with a home run, three RBIs and two runs scored.

Jacob Fox added Shelby County’s other RBI, as he had a double to drive home one run, while also scoring a run.

On the mound, Aderholt went six innings, striking out six and giving up two runs on five hits and no walks. Fox finished off the final inning by striking out the side to preserve the seven-run victory.

The second game of the series, however, featured early challenges for the Wildcats, as the Volunteers stormed out to a 3-0 lead through four innings of play.

But Shelby County took its first lead in the top of the fifth with a big four-run inning.

Jace Bolan kick started the rally with a one-out single, which was followed by a walk to Noah Reed.

Carter Sheehan then stepped into the batter’s box and took the second pitch he saw to center field for a triple that brought home both baserunners.

A hit batter and a walk then loaded the bases for Fox, who singled to left field to bring home two more runs and give Shelby County a 4-3 lead.

Central, however, responded by quickly regaining the lead in the bottom of the fifth thanks to back-to-back RBI singles.

The Wildcats were able to get out of a jam with back-to-back strikeouts, but they left the fifth inning down 5-4.

Central then added an insurance run in the bottom of the sixth, giving the Volunteers a two-run lead going to the final inning, but that still wasn’t enough.

Shelby County not only erased the deficit but did so with a dominant nine-run inning.

The Wildcats scored six of the nine runs with two outs, as they had six batters hit in the inning, drew one walk and had a single and two doubles to complete the comeback victory.

Sheehan, Matthew Pearson and Fox led the way at the plate with two hits and three RBIs each. Aderholt also added one hit and an RBI, while Logan Starnes, Wilson and Blake Jennings each finished with an RBI. Bolan and Reed also notched hits in the win.