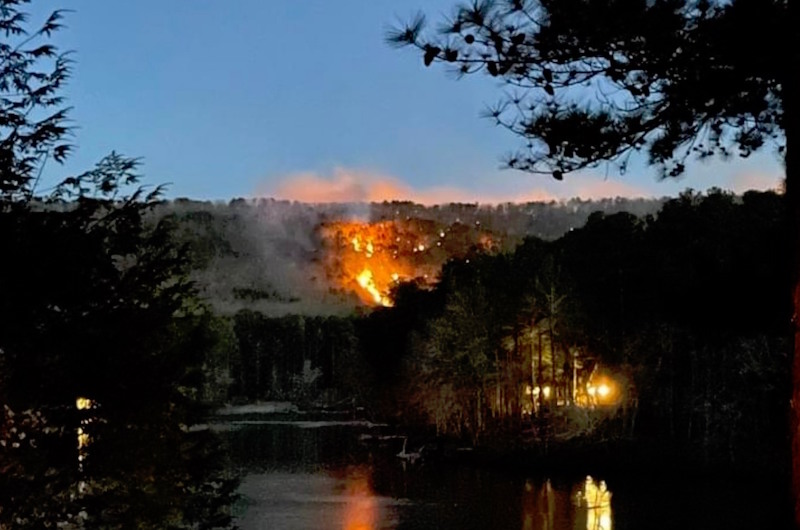 Multiple crews worked over the weekend to contain a woods fire that started near Stonegate Farms off Shelby County 41 and spread up the mountain due to windy conditions. (Contributed)

NORTH SHELBY – Crews from multiple agencies worked throughout the weekend to contain woods fires in the areas of Dunnavant Valley and Double Oak Mountain, as well as Lake Purdy.

On Saturday, March 26 at about 5:30 p.m., the Cahaba Valley Fire and EMR District posted an update on its Facebook page about the fire, which started in the area behind the Stonegate Farms neighborhood off Shelby County 41, nearly 6 miles from U.S. 280, and was carried up the mountain by wind.

In a comment on the post, CVFD confirmed the fire had grown to about 200 acres and was still not contained.

“Additional personnel are being called in for relief as well as additional resources and equipment from forestry,” the comment read. “Residents on the mountain side of Stonegate Dr. need to be mindful of the situation. Make sure to follow any safety directions given by the fire department personnel on scene.”

On Sunday, March 27 at 8:30 a.m., CVFD said crews were working to contain the fire by establishing fire breaks, and the spread had slowed considerably.

“After 28 hours since the beginning of the Stonegate fire, all CVFD units are clear from the scene,” read an update from CVFD at 7:30 p.m. March 27. “Forestry is coordinating all on-going operations moving forward. There will continue to be smoke and smoldering debris from inside the perimeter of the fire, possibly for several days, especially near the upper ridges and hard-to-reach areas. CVFD personnel will be checking the fire breaks behind the homes in Stonegate every hour throughout the night.”

On Monday, March 28, CVFD said the fire on Shelby County 41 and Double Oak Mountain is contained.

“Forestry is on scene double checking all fire breaks,” the update read. “Be advised there will be smoke in the Dunnavant Valley area for possibly several days. You may see spot fires on the mountain, but crews will be checking the fire break in Stonegate Farms throughout the next few days.”

Crews from CVFD and Birmingham Fire Department also responded to another woods fire in the Lake Purdy area, near Grants Mill Road and Sicard Hollow Road.

“A fire break has been established around the perimeter of the fire near Lake Purdy,” read an update on the CVFD Facebook page at 7 p.m. March 27. “Our units have gone in service and Birmingham FD is remaining on scene to coordinate with Forestry to establish a more substantial line around the fire. There will continue to be smoke and smoldering material inside the perimeter of the (fire) throughout the night.”

Check Shelbycountyreporter.com for updates to this story as more information is released.