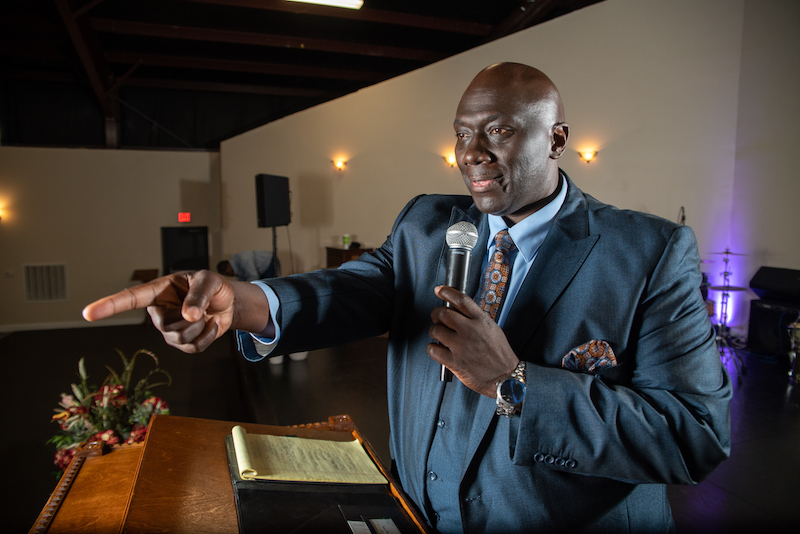 Theo Perkins has spent his whole life trying to uplift those around him through his many professions and hobbies. Perkins is the mayor of Harpersville, a bus driver, a pastor and also a real estate agent. (Reporter Photo/Keith McCoy)

Walking through Harpersville, you might think Theo Perkins man has clones of himself throughout the town. Every morning, he drives a school bus, and then, based on how his day is scheduled, he’ll be running errands as mayor of Harpersville, showing property to home owner hopefuls as a realtor, or working with members of his church—and we do mean HIS church. Perkins started the Liberty Christian Church in 2003 and has served as the lead pastor for the past 18 years of the now 230-member congregation.

Wearing that many hits might make anyone else’s head spin, but not Theo. He takes pride in his work, and believes staying busy keeps the spirit and the mind young.

Let’s start with his first hat he wears the morning. Theo has officially been driving a bus for 29 years, but that doesn’t count the years he drove the bus while he was in high school. “I enjoy it,” he says.  “A lot of people say, ‘Oh, kids are terrible, they’re not like how they used to be,’ and to that I say, ‘Kids are still kids, and as long as you respect them and require respect from them then you have no trouble.’ That’s how I drive the bus.”

Over the years, he has seen students come and go, and he always makes sure to remind them that their time at school is precious. His impact on the students well known around the town, and even has inspired some local teachers.

Recently he was approached by a teacher from another school about a certain speech he gives the students every morning. “It goes, ‘You’re not here to eat, sleep, socialize or court. You are here to get an education. Have a great day,’” he says. “But this teacher came up to me, and she said that ever since she heard about my speech, she gives it to her own students.”

Theo’s life of service and imparting wisdom on others began with the help of the city council president at the time, Wiltha Kelly, who also happened to be a former teacher, after he attended college in at the University of Alabama in Tuscaloosa. “Perkins, you’re back home. You’ve been away to college. It’s time you give back to your town,” he told Theo.

Wiltha went on to tell him about an open position on the local water board and that he planned on nominating him for the role. Perkins Theo hesitant at first but ended up taking on the position. A few months later, Wiltha pushed Theo onto the Planning Board. Over the years, he moved up as a city councilmember, and in 2004 he made the decision to run for mayor. He was elected and served for 12 years. After missing out on one year, he jumped back into the election circuit and was once again as the town’s top role with its people in mind.

“People want somebody that will listen to them and take their concerns seriously,” Theo says. “People’s problems are legitimate. Whether we think they’re minor or whatever, people have placed us here to be problem solvers. I hear people talking about, ‘Oh, so-and-so called me about their cat up a tree.’ Well, that’s part of it. That’s why we’re here, to help solve their problems, and people appreciate that.”

Helping people as mayor led to another love in his life too: real estate. When he reached out to his friend Valon Lowe of Lowe Realty in Columbiana and told him he was debating going into real estate, Valon told him it was an excellent idea.

Theo worked with Valon for a while learning the ropes of real estate and “cutting his teeth,” and then he went to work for Abast Realty for a couple of years before earning his broker’s license. With time as an associate broker under his belt, he most recently started his own company, Realty Perkins, in February 2021. “I really like not just showing properties, but I like evaluating properties for people, helping people through the whole process,” he says. “Some people need to be walked through it and have someone hold their hand, and we are more than happy to hold their hand through everything.”

His favorite part of the home buying process is the “indescribable joy” he feels when he helps people find their first home—something he wouldn’t change for the world and that makes the stressful process of buying a home worth it.

That theme carries over to his church life as well. Perkins grew up in church, and his parents instilled a strong sense of faith and worship into his life. For years he sang in his church choir, and he eventually became the choir director and felt the calling to lead in the ministry during the late ‘90s. He was ordained shortly after. For his first five years in ministry, he filled in for pastors, and then in 2000 he started pastoring the first church of his own in Alpine in Talladega County for three years.

Theo’s current church is nondenominational since he desires to for the church to be open to everyone who wants to express their love for God and who is looking for their purpose in life.

“We want to reach people and tell them their lives can be changed through the word of God,” he says.  “We want to elevate people and help them reach their God-given potential because everyone has potential.

For Theo, it’s important to get to know everyone who walks through the Liberty Christian Church’s doors, focusing his care and attention on the whole person. Jeremy Bradford, the church’s praise and worship leader and, also, one of Perkins’s real estate clients, can attest to that as he describes Theo as “a jewel to the community.” “He’s a life coach, a counselor and a friend,” Jeremy says. “He is indeed the type of person you would want in your corner.”

For example, when Jeremy’s grandmother died, Theo prayed for him, “when I didn’t know to pray for myself,” and the encouragement helped Jeremy pull through a very dark time and gain his confidence back, something he is forever grateful for.

It’s relational interactions like this one, whether through real estate, bus driving, serving as mayor, or pastoring a church, that bring Theo the most joy. “I want our community to be great. I want it to be better, and I think that’s the thing that gives me joy,” he says. “When I can see things are getting better, when I see their light improve, because it shows all these roles that I play make a difference.”

When asked about where he finds the strength to lead so many people towards finding their truth, Theo has one credit: God. Though he admits it can be challenging at times, he knows it’s all for a purpose greater than him.

“I know what my gift is,” he says. “I know what my purpose is, and it is encouragement, uplifting people. These things allow me to do what God has called me to do.”