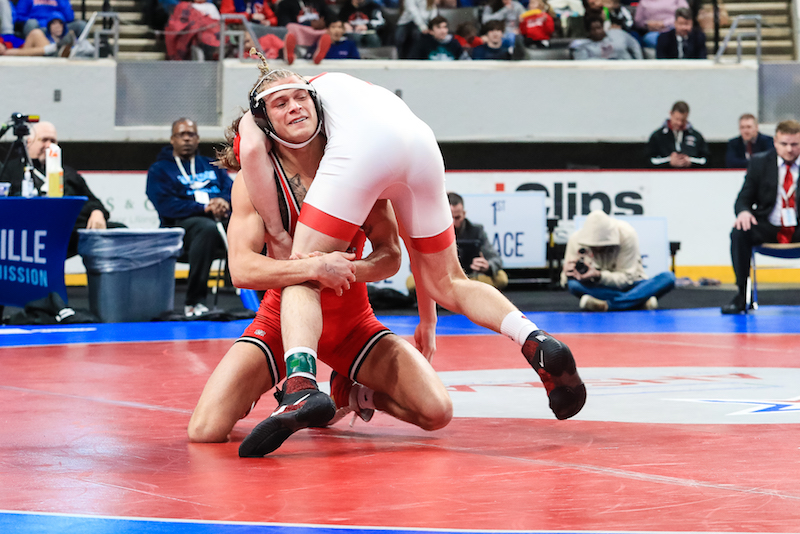 James Latona, above, joined Yanni Vines as two wrestlers from Thompson High School to win a National Championship this season. (For the Reporter/Dawn Harrison)

VIRGINIA BEACH, Va. – The Thompson wrestling program took another step toward dominance on Sunday, March 27 when two wrestlers not only bested the competition to win national championships, but beat every state represented.

Fresh off state championships for the Warriors to help them reclaim the top spot as a team in the state, James Latona and Yanni Vines traveled to Virginia Beach, Virginia March 25-27 to compete in the NHSCA National Championships.

Not only did both wrestlers win three consecutive matches to claim titles at the national event, but they helped Alabama have two national champions.

No other state had more than one wrestler win a championship, while Alabama had two from the same school, marking another impressive milestone for the Thompson program. 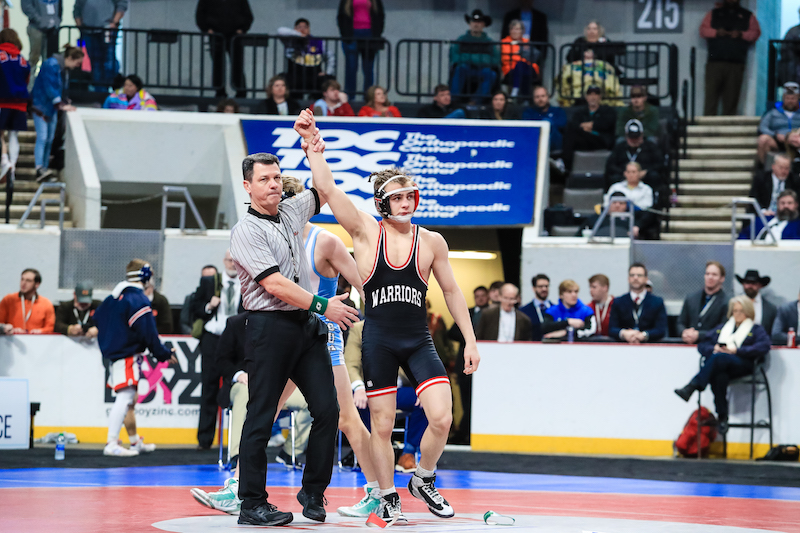 Vines, who competed in the 120-pound weight class at the national championships, powered his way to three consecutive decision victories against some of the top wrestlers in the country.

In the quarterfinals, he picked up a tightly-contested 5-3 decision victory against Damion Ryan from Dayton, Ohio to punch a ticket into the semifinals.

As the tournament went on, Vines seemed to get better, which showed in the semifinals. Taking on Derek Glenn from Aurora, Colorado, he picked up a 5-2 decision win.

That set him up for his biggest margin of victory at the tournament, taking down Glenn Price of Marrero, Louisiana in a 6-2 decision victory to claim the 120-pound national title.

Vines got redemption from a year earlier, when he finished runner-up at the same event.

It marked a strong finish to the season for Vines, who is committed to Columbia. He also won his third consecutive state championship by dominating the 126-pound weight class with two pins and a 9-3 decision victory.

Latona’s path to the national championship featured a thrilling ride.

In the quarterfinal round, he used a 3-2 decision victory against Anthony Conetta of Massapequa, New York to slide into the semifinals.

That’s when he was able to notch his biggest win of the tournament, pinning Trae Thilmony of Thompson Falls, Montana with a fall time of 1:42 to punch a ticket to the championship match.

In the final battle, it was another thrilling 3-2 win in favor of Latona against Drayden Morton of Winthrop, Minnesota to earn the championship in the 145-pound weight class.

Latona, a Navy signee, finished off his senior season with a dominant trek that also featured a state championship thanks to two pins and a major-decision victory of 15-4.

In addition to the two national champs, Thompson also had two other wrestlers earn All-American honors. Cory Jones and Will Garrett both finished seventh in their respective weight classes to earn that recognition and cap off a special year.