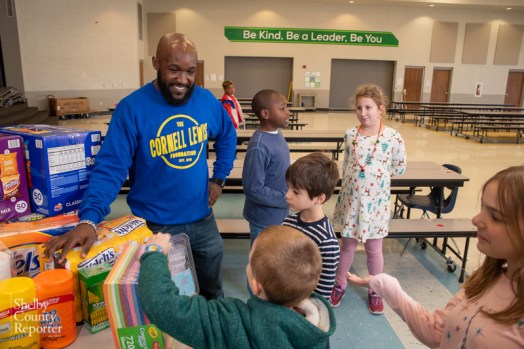 Aaron Lewis brings supplies to Pelham Oaks Elementary School and presents them to the students and teachers. (Reporter Photos/Keith McCoy) 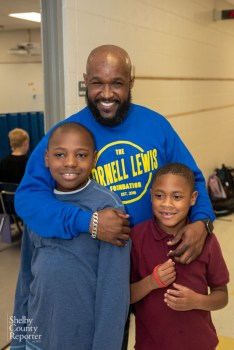 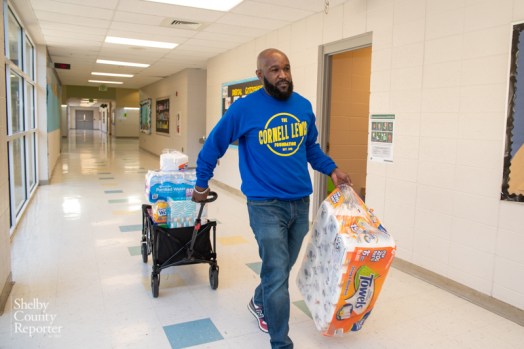 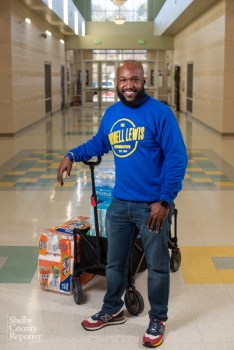 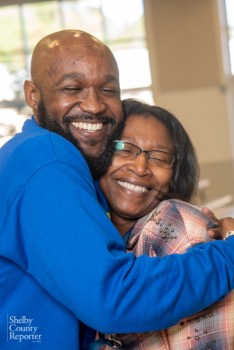 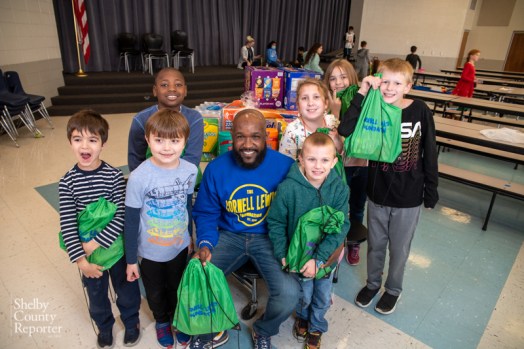 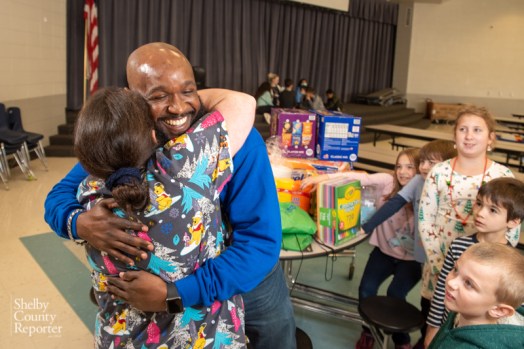 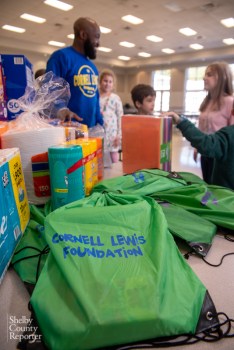 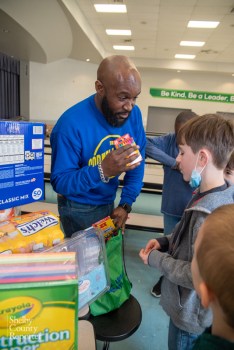 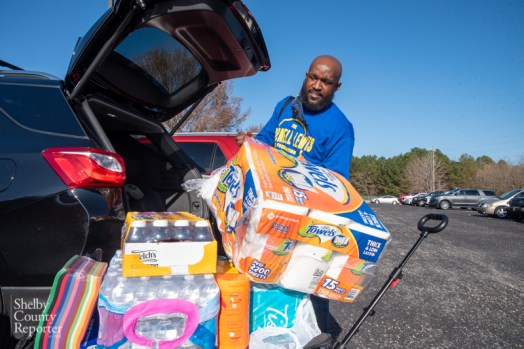 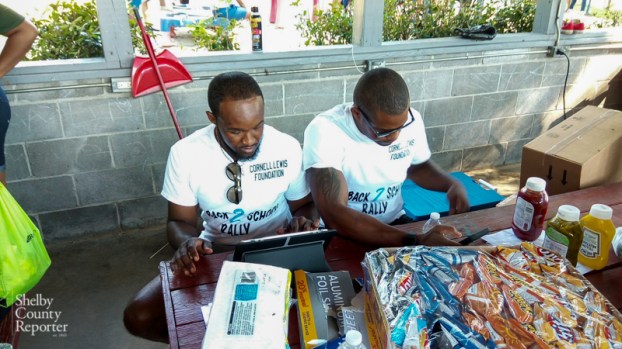 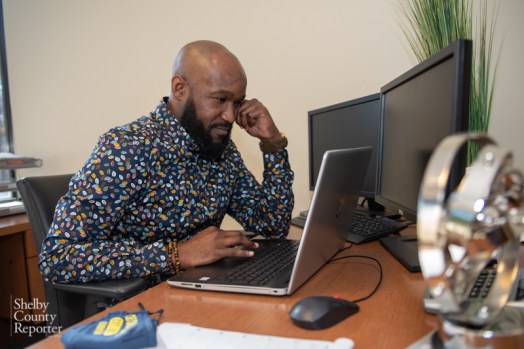 In addition to his nonprofit work, Aaron works a full-time job as an accountant assistant for Gateway Management Company.

Some dreams fade in the first moments of consciousness, but Aaron Lewis remembers one he had in the summer of 2016 as vividly as if it happened yesterday. In this dream, Aaron says God prompted him to take the next step with an idea he had been contemplating for a while to organize an event benefiting students as they prepared for a new school year. All he needed to get started was a divine nudge.

“I wanted to give back to the community in some aspect,” Aaron, 29, says. “I thought, ‘Why not do a back-to-school rally?’ I had always wanted to do something along those lines, but I was scared.”

At this point, Aaron had been praying for students and their parents at the beginning of a new school year for years. He would share what he calls a “mass prayer” on his Facebook page and tag the parents of school-age children he knew, reminding them he was thinking of them at a pivotal time. But he wanted to do more—not because he underestimated the power of prayer, but because he felt impelled to answer a higher call to action.

Then, he had that “very vivid dream” in 2016, shortly after graduating with a degree in accounting and finance from the University of Montevallo. “It was more so instructions of ‘You need to do this,’ and ‘This is your assignment,’” he recalls. “I started calling people and saying, ‘Hey, I’ve got a project for us. I want to do a back-to-school event.’”

That summer, Aaron planned the first event at a neighborhood park in Helena, where much of his family lives. He made it a casual, come-and-go style event—an afternoon for families to enjoy fellowship while picking up any school supplies their kids needed. And while he was at it, Aaron used his middle name to name and establish the Cornell Lewis Foundation as the organization behind the inaugural Back 2 School Rally in 2016.

When he arrived at the park on the morning of the rally, he was astounded at the early turnout. “There were people already there,” he says. News of his plans had circulated mostly by word of mouth and social media. “I had put a Facebook post out, but I didn’t know it had been shared to that magnitude of people. Needless to say, my assignment was bigger than my eyes.”

Aaron looked at the amount of supplies and food he and his volunteers had on hand to distribute, wondering if it would be enough. He also worried about the weather. A storm was forecast for the area, and he didn’t have a backup plan for his outdoor venue. “It rained in Helena except at the park,” he says. “The park was fine. I look up and there’s literally two rainbows coming across the sky, and I’m like, ‘I got it. I passed the assignment.’”

Not only did he pass, but Aaron also gained the confidence he needed to continue the event, knowing how successful the first year had been. And just like that, as he describes it, “A one-year event turned into year seven.”

And each year, he has gained more experience and knowledge of the ins and outs of event planning and logistics, all the while gaining support from the community. The second year of the rally took place at Joe Tucker Park, and the third installment was held at the Helena Sports Complex.

The third year is also when Aaron incorporated items and supplies like bedspreads, bath towels and clothes hampers for college students. “I realized my students were getting older, growing up and going off to college,” he says. “If you want to go to school, I’m going to make sure you have the bare necessities.”

Although Shelby County boasts multiple affluent neighborhoods, it also has areas of need, and Aaron didn’t see much happening in terms of school supplies drives before he launched the Back 2 School Rally. But he sees the turnout at his events—with residents from Shelby and Jefferson counties attending—as proof he is helping to fill a financial gap for many local families. The rally usually serves between 70-120 students each year. “It’s just to give you a head start,” he adds. “If I can help you save just $75, let me help you. It’s all about helping.”

The Back to School Rally usually happens the last week in July or the first week in August, but Aaron’s work doesn’t stop when the last person leaves. In some ways, that’s just the beginning of a new cycle. “I get phone calls of, ‘Hey, I couldn’t make it. Could we meet somewhere for school supplies?’ I meet people around town.” He keeps about 10 bags full of supplies such as pencils, pens, colored pencils, notebooks and copy paper in his car, ready for those unexpected phone calls.

On top of all he does with the foundation, Aaron has full-time job in accounting. Prior to that, he worked as a paraprofessional at Pelham Oaks Elementary School. When he’s not working, he is likely picking up another batch of supplies or adding ideas for the next Back to School Rally to the Notes app on his phone. But he does it all with a happy heart.

Brian Fells, Aaron’s father, says he has been impressed with his son’s desire to give back to the community at a young age. “As a father, I’m very proud of him,” Brian says. “I continue to see him grow. I wish him much success and to just keep God first.”

Aaron is constantly thinking about ways to improve the event too. He started holding prize giveaways. This year, for example, he gave away two tablets. Last year, he passed out Domino’s Pizza gift cards to the first 50 families who came to the event. “Each year, I always try to give away something just for fun, a small thank you token,” he says. “I’m a giver, and I like to have fun. As long as you’re having a great time, I’m having a great time.”

Brian and his wife, RaKisha Lewis-Fells, help Aaron with whatever he needs for the event and provide moral support. “We don’t take over because it’s his vision,” Brian says. “We’re there from the beginning to the end, so he won’t be stressed. He’ll tell us what he needs, and we’ll make sure it gets done.”

RaKisha says Aaron tries to tailor the supplies he gives out to each grade level, focusing on specific needs students have rather than buying generic supplies they might not be able to use.

“He’s methodical. He thinks about what he is going to give to the people, to the children that come out,” she says. “It’s his passion.”

For RaKisha, watching Aaron put others before himself shows the values she instilled in him as a child have stuck.

Among Aaron’s current goals are achieving nonprofit status for the Cornell Lewis Foundation and continuing to develop a board of directors to assist him with organizing and running the Back 2 School Rally. Aaron admits he has trouble with the “hands-off” concept, though. “It’s my baby. It gets hard sometimes, but at the end of the day, if everyone’s satisfied, it’s a good turnout.”

The event gets bigger and better every year because of Aaron’s commitment to it, his dad says. “He’s very passionate about it,” he says. “We make sure he’s calm and gets his vision. He has a big support system.”

Through the peaks and valleys over the last six years, Aaron’s strong faith that sparked the initial idea for the project is what has carried him. “I know that I wouldn’t have gotten this far if it wasn’t for my faith in God and him directing my path, especially with the foundation,” he says.

At times, he has thought the 2022 Back 2 School Rally—which will mark seven years of the event—could be his last. But then, he’s back to jotting down notes in his phone, preparing and strategizing like he always does. Aaron’s plans for Rally No. 7? “We’re going to be out there having a good time.”