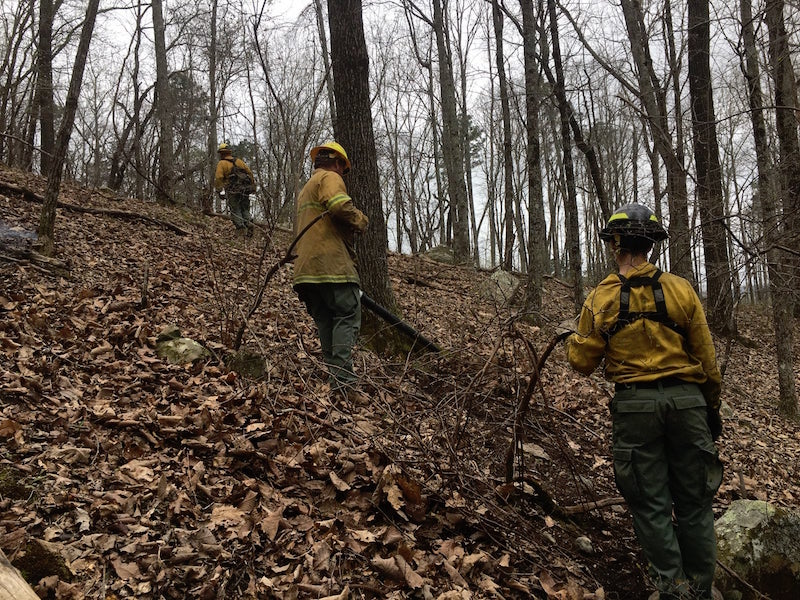 NORTH SHELBY – A wildfire spanning more than 700 acres in north Shelby County is fully contained as of Wednesday, March 30.

The fire started in the Dunnavant Valley and Double Oak Mountain area on the afternoon of Saturday, March 26 and spread rapidly because of windy conditions.

“After working almost around the clock for four days, firefighters with the AFC and several local fire departments ­– plus assistance of water drops by the ALEA helicopter – have reached 100 percent containment on the Stonegate Fire in north Shelby County,” read an update from the Alabama Forestry Commission on the morning of March 30. “Total containment was achieved Tuesday afternoon.”

The fire burned 740 acres of land, as confirmed by drone.

The fire’s point of origin was Stonegate Farms off Shelby County 41, where a resident was trying to burn brush when the wind carried the fire up the mountain, causing it to spread quickly, Shelby County Manager Chad Scroggins said.

“It went three quarters of a mile in an hour,” Scroggins said in his report at the Shelby County Commission meeting on Monday, March 28. “It was moving very rapidly.”

Multiple agencies responded to the emergency calls on March 26 with crews and equipment to battle the blaze throughout the weekend.

A total of 23 AFC personnel representing 18 counties across the state continued to work on the fire on March 30, reinforcing the containment lines, cutting dead trees near the lines and taking other measures to ensure live sparks do not have a chance to escape during strong winds forecasted for the afternoon.

“It’s not a good day for burning outdoors,” read another update from AFC on March 30. “The impact of today’s weather event on dangerous fire behavior cannot be stressed enough. From north to south Alabama, winds are forecasted at 20 ft above 10 mph with gusts greater than 30 mph. This will lead to erratic fire behavior.”

“It’s been our number-one priority since about 3 p.m. on Saturday,” Scroggins said. “There’s been a lot of cooperation and a lot of people.”

On March 28, Shelby County EMA Supervisor Hub Harvey said the ALEA helicopter had made 150 water drops over the area from Sunday, March 27 to Monday, March 28.

“I’m humbled and honored to get to work for a county like Shelby County,” Harvey said. “We come together and we help each other, whatever it takes. People don’t care who you work for, who your paycheck’s from, what department you volunteer for. It’s just awesome to see how people come together and run to the fight and get the job done.”