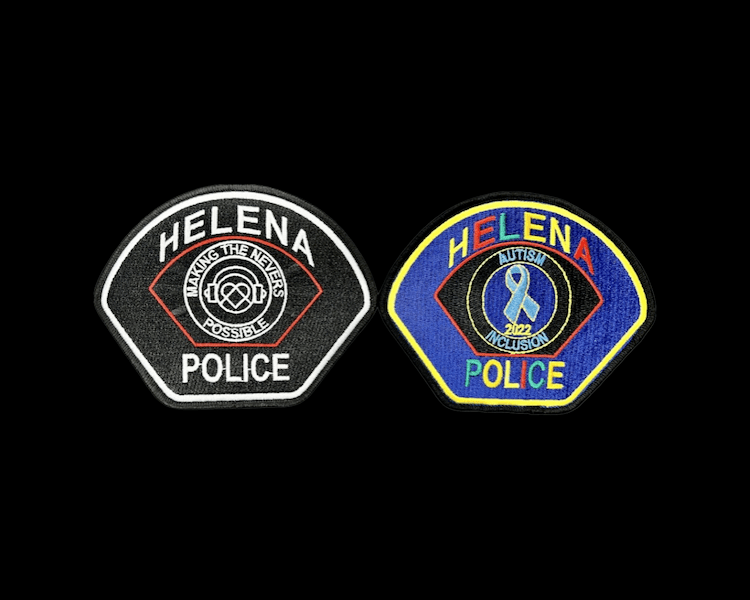 The Helena Police Department has started selling specialty patches for Autism Awareness Month, which runs throughout the month of April. All proceeds from the patches go to Kulture City, a local nonprofit that is dedicated to sensory awareness and inclusion. (Contributed)

HELENA – The Helena Police Department has partnered with the nonprofit organization KultureCity to sell specialty patches for Autism Awareness Month, which runs throughout the month of April.

KultureCity, which is based in Birmingham, is the largest sensory awareness and inclusion nonprofit organization in the United States. The organization was created by two local physicians who were frustrated that their son, who was diagnosed with Autism, was excluded from events other children were able to participate in.

“They have worked hard around the country to make public venues such as shopping malls, sports venues, zoos and many other locations ‘sensory inclusive,’” said HPD Chief Brad Flynn. “The staff is trained on how to interact with those with a sensory conditions such as Autism, PTSD or Sensory Processing Disorder and provide them with the necessary things to make them feel included.”

This is not the first time HPD has partnered with KultureCity. In December 2021, HPD premiered their new sensory inclusion trailer which is a soundproof trailer used to help those with sensory awareness issues feel safe at events where they may feel overwhelmed such as concerts or festivals.

“The rooms are state of the art with adjustable lighting, bubble wall lamps and other items to help them readjust,” Flynn said. “They also provide ‘sensory bags’ to those who might need assistance due to a high sensitivity to noise. These bags include noise cancelling headphones, fidget toys commonly used by those with sensory needs and a nonverbal communication card to make it easier for them to communicate with others should they be nonverbal.”

Flynn said in 2020 KultureCity developed a training program for first responders to help them learn how to not only recognize the characteristics of someone who might be experiencing a sensory overload, but also how to safely interact with the individual and give them whatever help they may need in the moment.

“Helena PD was the second law enforcement agency in the country to receive this certification and the first city in the world to have all city employees trained in sensory awareness and inclusion,” Flynn said. “We are very proud of our work in promoting sensory inclusion and we could not think of a better organization to support with this year’s profits than KultureCity.”

The police department is selling two patches for this year’s sale: one with the KultureCity logo and another that promotes Autism inclusion. The patches are limited edition and are $10 each or $20 for the two together. The patches can be purchased at the HPD headquarters or by contacting cop@cityofhelena.org. One hundred percent of proceeds will go to KultureCity.