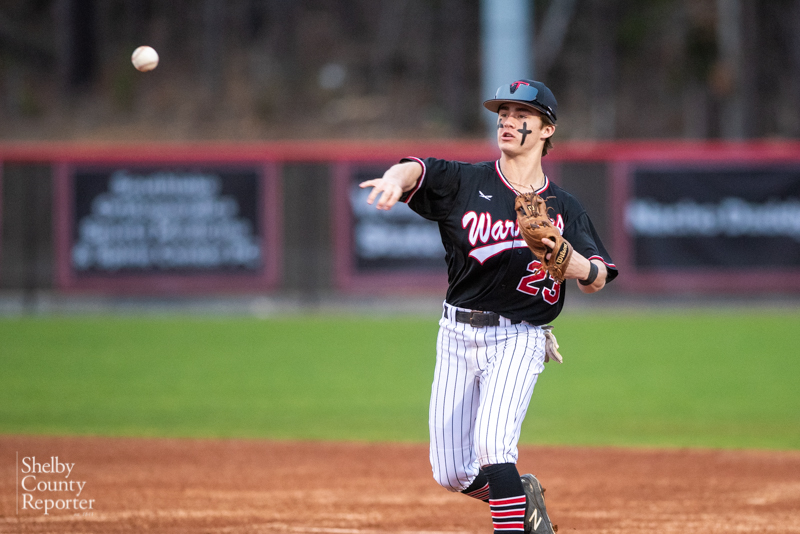 The Thompson Warriors went 5-1 during a three-day stretch of spring break to improve to 15-14 on the season. (Reporter photo/Keith McCoy)

The Thompson Warriors put together one of their best stretches of the season to kick off spring break, winning five of six games in a span of three days between March 28 and 30.

The Warriors earned wins against James Clemens, East Limestone, Huntsville, Hazel Green and Cullman, while they had one loss of 3-1 to Cullman.

Thompson opened the week with two games on Monday against James Clemens and East Limestone, and the bats were on fire.

In the fourth, each team added a run, giving Thompson a 5-4 advantage. After three more from the Warriors in the fifth and two from the Jets in the bottom half, it was 8-6 heading to the top of the sixth.

That’s when Thompson put the game away thanks to a six-run inning that ultimately led to the 14-6 victory.

Ben Pearman led Thompson with three hits, adding an RBI and three runs scored, while Drake McBride totaled two hits and four RBIs. Brodie Holcomb finished the game 2-for-3 with three RBIs thanks in large part to a home run.

Matt Casey also finished with multiple RBIs and hits with two of each, while Major Paracca had two RBIs on one hit.

Paracca also got the win on the mound, going 5 1/3 innings and giving up six runs on nine hits with two strikeouts. Mac Bowman finished the game by striking out two and allowing no hits or runs.

The second game of the Monday doubleheader was one sided, as Thompson pulled away with three runs in the first, one in the fourth, five in the fifth and one in the sixth to grab the 10-0 win.

Clay Meacham was big on the mound in the win, giving up one hit and no runs while striking out five batters in 4 1/3 innings of work.

A day later, the Warriors played two more and the bats remained hot.

They opened the day in almost identical fashion to the way they finished the day before in a 10-0 win against Huntsville.

Thompson scored eight combined between the first two innings to storm out to an 8-0 lead, tacking on two more between the fourth and fifth innings to complete the 10-0 shutout.

Pearman and McBride both had home runs in the win, as each finished with two hits. McBride added three RBIs and Pearman two RBIs.

Edmondson totaled one hit and had three RBIS in the win, while Holcomb finished with two hits and one RBI.

Landon Alton got the complete-game win, striking out five and allowing no runs on six hits.

Thompson followed that with another 10-run performance against Hazel Green later in the day, but this time, the Warriors had to hold in a rollercoaster 10-9 win.

Taking on Hazel Green, Thompson fell behind 4-3 through two innings and 5-4 through three innings.

The Warriors, however, scored one in the fifth, three in the sixth and two in the seventh to take a 10-5 victory going to the bottom of the final inning.

Hazel Green gave a strong push with four runs in the inning, but ultimately came up short in the comeback bid.

McBride continued a big stretch of play with a 3-for-3 game featuring two doubles and three RBIs, while Paracca finished with two hits. Edmondson also had three RBIs on one hit, while Carson Foote and Tucker Arrington each finished with one hit and one RBI.

Holcomb got the start on the mound, going 2 1/3 innings and allowing five runs on three hits and five walks with two strikeouts.

Harrison Griffeth finished off the game, striking out 10 the rest of the way, allowing four runs on four hits and four walks.

Coming back for a third straight day on Wednesday, Thompson was handed its only loss in a 3-1 game against Cullman.

The Warriors got two hits from Holcomb and one hit and an RBI from Ryan Walker, but a three-run opening inning for the Bearcats was too much for Thompson to overcome, as they failed to score until one run in the final inning.

Thompson, however, quickly got redemption with a 7-3 victory against Cullman to close out spring break.

The two teams matched each other with a 3-3 tie through five innings, but four unanswered between the sixth and seventh for Thompson became the difference.

Pearman and Holcomb finished off the tournament with two hits each, while Paracca, Arrington, McBride, Walker and Bowman each had one hit in the win.

McBride led the way with two RBIs, while Paracca, Arrington, Holcomb and Bowman each had one RBI.

Gavin Chandler went the distance, striking out seven and giving up three runs on eight hits.