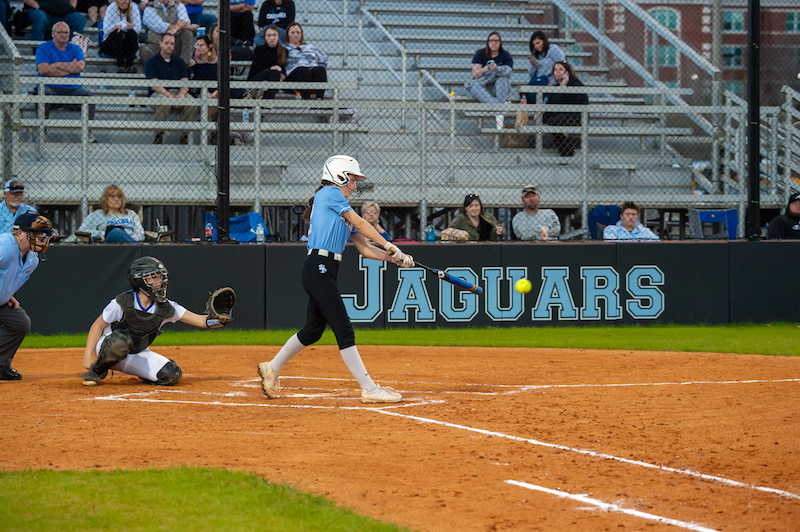 Spain Park’s softball team finished the Oxford Spring Sting with three wins to improve to 22-5-2 on the season. (File)

OXFORD – Heading into the most important stretch of the season, the Spain Park softball team was able to get back on track during the Oxford Spring Sting tournament at Choccolocco Park April 1-2.

The Jaguars lost their opening game of the tournament in an 11-1 game against Central-Phenix City, which pushed their losing streak to three in a row.

But Spain Park (22-5-2) responded in a big way with wins against Smiths Station, Lincoln and Cleburne County to finish off the event and start a win streak heading into the final few weeks of the regular season.

After the 11-1 loss to Central to open the tournament, the Jags pulled off a clutch win in the second game of the tournament against Smiths Station.

That deficit didn’t last long, as the Jags put together a four-run third inning to storm in front for a 7-4 advantage.

But in a back-and-forth battle, Smiths Station responded with four in the fourth.

The Jags, however, answered in the top of the sixth with a clutch two-out RBI single from Emma Jolley to even the score and eventually force extra innings.

Then, still tied 8-8 in the top of the eighth, Morgan Jolley was able to score on an error in center field following a single from Reagan Stewart. That ultimately made the difference in a 9-8 win.

Maggie Daniel had a big game for the Jags, finishing a triple shy of the cycle. She totaled three hits, including a single, double and home run to post four RBIs in the win. Katie Flannery also had three hits in the win, while Morgan Jolley finished with two hits and two RBIs. Emma Jolley added one hit and one RBI, while Charlee Bennett had two hits and one RBI.

In the circle, Katherine Brown, Caroline Whisenhunt and Ella Reed combined in the winning effort.

A day later, Spain Park came back and grabbed wins of 8-3 against Lincoln and 6-2 against Cleburne County to finish off the event.

Against Linclon to kick off the day, the Jaguars scored four runs in the first and four more in the fourth as part of the five-run win.

Flannery had a bases-clearing double to finish with three RBIs in the win, while Bennett added two RBIs on one hit. Emma Jolley had one RBI on two hits, while Blakley Watts finished with a triple and one RBI.

Brown pitched five innings in the circle and gave up two runs on three hits with five strikeouts, while Emma Kate McCarty added four strikeouts over the final two innings.

Shortly after that win, the Jags put together another impressive performance against Cleburne County, scoring four runs in the top of the third to make the difference in a 6-2 victory.

Flannery, Watts and Morgan Jolley all finished with one hit and one RBI to lead the way in the win.

Reed got the complete-game win in the circle, striking out 12 and giving up two runs on seven hits and two walks.