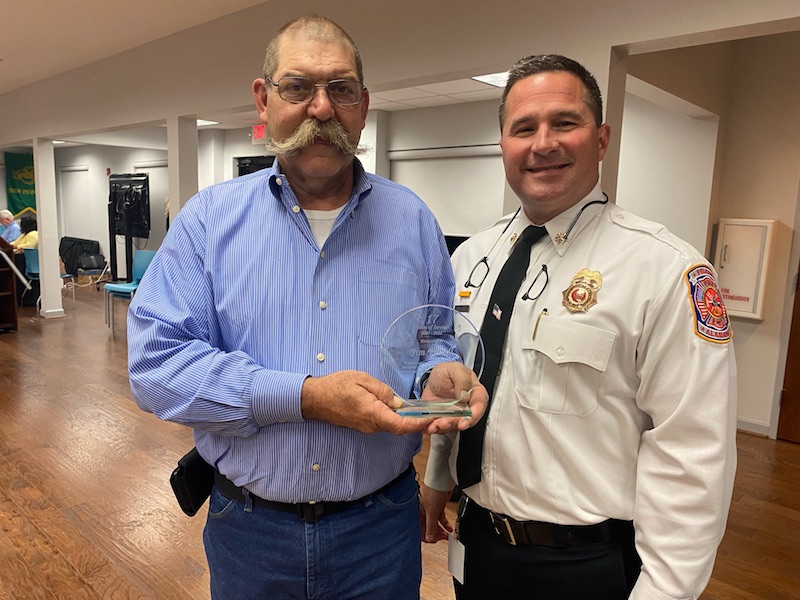 Pelham Fire Department's Jim Terrell received a standing ovation and an honorary plaque in honor of his retirement from his career in fire service. (Reporter Photo/Michelle Love)

PELHAM – At the Pelham City Council meeting on Monday, April 4, Mayor Gary Waters used his allotted time for the mayor’s remarks to honor Pelham Firefighter Jim Terrell, who is retiring from his position at the Pelham Fire Department.

“I wanted to take this opportunity to recognize Fireman Jim Terrell for his career with the Pelham Fire Department and also his fire service career and congratulate him on his retirement,” Reid said.  “I would be remised to mention his wife Sharon in the back. Thank you for letting us borrow him for 17 years at Pelham.”

Terrell was hired onto the PFD in 2005 by then-Chief Waters, and Reid said from the beginning Terrell threw himself into his job.

“Really ground running he was one of those employees who as soon as he hit the door he wanted to do anything he could to contribute to our department,” he said. “The special thing about Jim is he contributed until his very last day.”

Terrell’s career in fire service spans over 37 years, 17 of which were with the PFD. In 2021, he was presented with the honor of Firefighter of the Year. While Waters was Chief, he had the department trained in Wild Land Firefighting, which included a team that would deploy with the Alabama Forestry to wild fires all over the state and country. Terrell served on that team for several years.

Waters presented Terrell with a poster printed by the Alabama Forestry Commission that depicted Terrell with other fellow wildfire firefighters at Shenandoah National Forest.Terrell is also one of the coordinators for the Peer Support program at the Alabama Fire College and will continue in that role in his retirement.

Reid said Terrell has been instrumental in the Peer Support Program for not only the PFD, but departments all over the Southeast.

“What we as firefighters and police deal with and experience every day is really tough, and for Jim to be able to pay that forward is so important for our profession,” Reid said.

Terrell received a standing ovation from those present at the meeting and was presented with a glass plaque that reads “Seventeen years of service 2005-2022.”

Members of the Council also offered their congratulations to Terrell.

“Congratulations to Jim Terrell,” said Councilman Larry Palmer. “I’ve known you for a long time. We’ve had some great conversations over the years when we worked together, and I learned a lot from you, my friend. Best of luck to you and your family. Stay safe and come see us.”

“I would like to congratulate Jim on his retirement,” said Council member Mildred Lanier. “It says a lot about your love of the city, and Mayor, when you gave him that poster, that was really moving. That spoke volumes to me of the comradery and the relationship and the care and love you all shared throughout your career.”