PROFILE: David Ladewig travels the country bringing the joy of music and comedy to fellow veterans. 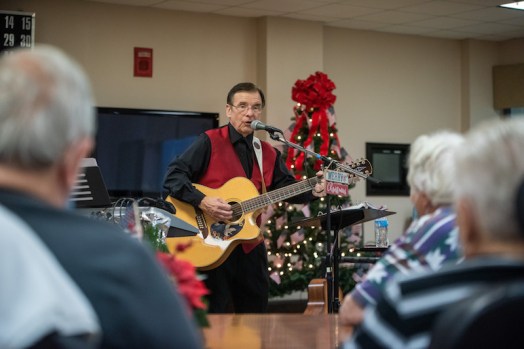 David Ladewig travels the country singing to veterans to give back to a special community. (Reporter photos/Keith McCoy) 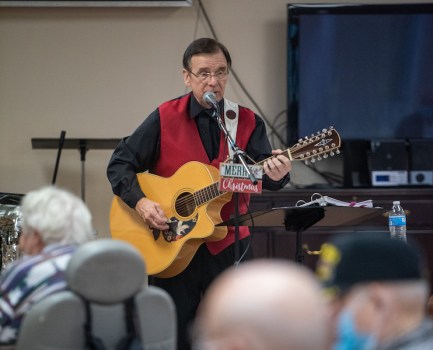 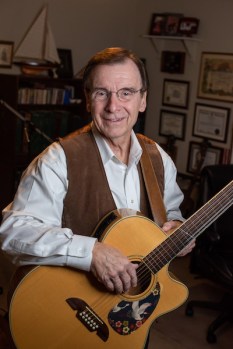 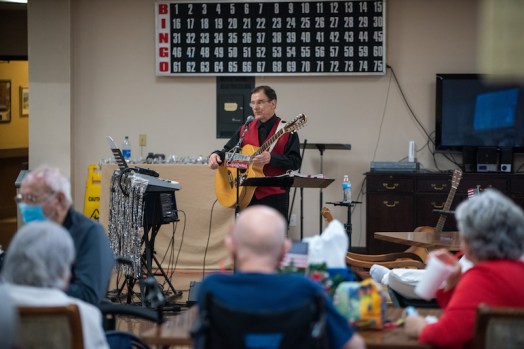 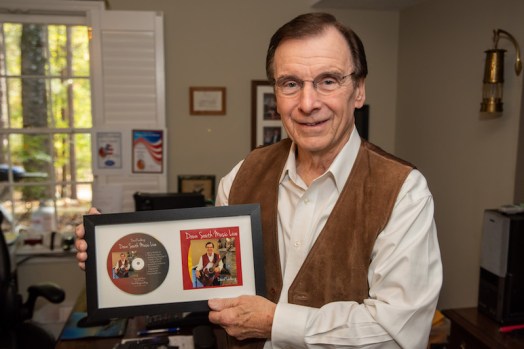 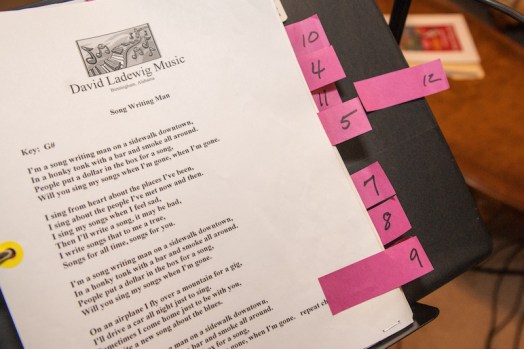 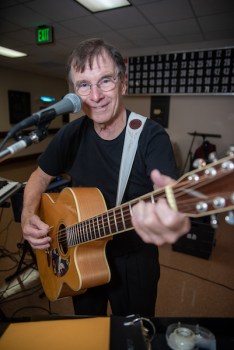 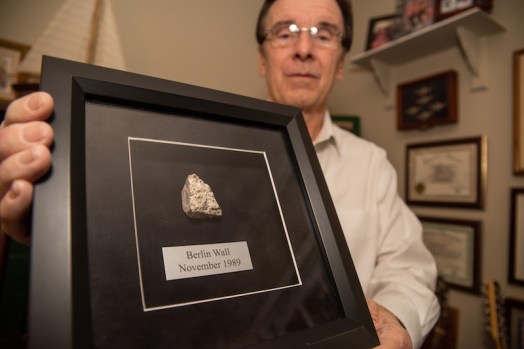 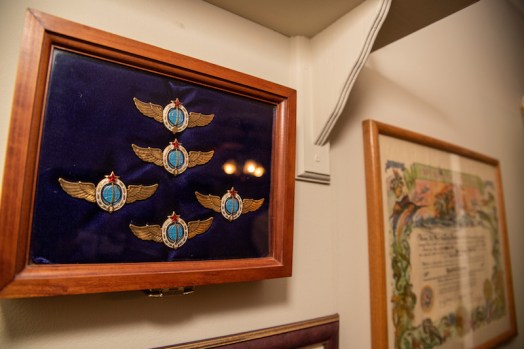 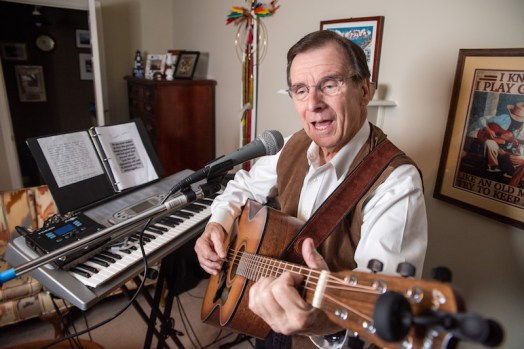 Standing in front of a room of veterans in Manchester, Tennessee, David Ladewig pulled out a piece of the Berlin wall.

He proceeded to pass the rock to someone in the audience. As it made its way around the group of veterans, it was fumbled on an exchange and hit the ground. A gasp overcame the room.

“Some of them are in wheelchairs, so think about this: If they wheel around to find it, and one of them rolls over it, it’s so old that it would be toast,” David says.

But in typical, witty fashion, he quickly thought of a joke.

“I guess I need to have that put in a case,” he says with a laugh.

It’s those moments that bring joy to Pelham resident as he travels to veterans around the country to share his music.

Playing to his own tune

Five years ago David—whose day job is president of The Cambridge Agency, Inc. —stood in front of a room full of veterans for the first time in Pell City with no idea of what he was doing. “To tell you the truth, if I was a judge of the first two shows, the gong would have gone off,” he says while laughing. But it quickly led to a passion.

A former world traveler, David was looking for that extra flair in his life. He’d never considered himself a musician though, so he was baffled when he asked to perform in the first place.

“I played guitar, but I wasn’t a real musician who could create a jingle,” David says. “What I could do is write the lyrics, which I’m really good at. Then, I could get out my guitar and ding out a little melody, and then go to the studio and get it produced.”

It was through producing music in Birmingham and Nashville that he got into jingles, and then a friend asked him to play for some veterans. That’s when he realized they wanted him to write songs and perform his own music and act too. Despite not performing up to his expectations in his first two shows, he was hooked and wanted to make not just share music but also a deeper sense of commonality.

Along the way David got pointers from a few people with music backgrounds who listened to him and practiced and practiced. Thus his show was born.

Since that first show in 2015, David has now performed for more than 120 throughout Alabama, Mississippi, Tennessee and North Carolina. He shares jokes, historic artifacts and stories from his time in the Navy aboard the USS Saginaw as an engineer from 1970-1972.

But most importantly, he shares a book full of his own songs that prides himself in.

“He does all of this with original music. He doesn’t play any covers; he plays songs he writes,” says award-winning songwriter Randy Finchum. “He keeps the audience entertained. You hear some of the same stories, but you’re always entertained. He’s not a boring guy. He’s been all over and seen it all and shares everything.”

A woman laid on her back in a bed at a 7-degree angle at one of David’s concerts. She couldn’t talk. She couldn’t walk. David remembers her laying there as he performed songs and made a few jokes, just knowing the music was bringing her some form of joy.

“You need to be prepared for what is going to happen, because some of them might get sick, some of them might go to sleep, and that’s OK. That doesn’t mean they’re not listening,” David says. “When you see a kid come in there on a bed, it can shake you. I’m used to it, so I’m OK.  but it is something you have to be prepared for because it can be heartbreaking to see.”

David has seen it all playing shows for those between the ages of 25 and 100. “Some of those kids in those places are kids who have been blown up in Afghanistan and Iraq,” he says. More than anything David wants his music to bring a little joy into their lives so they can forget about some of the tragic visions war implants in minds.

“You can tell David lived a life of passion and heart. His demeanor, his soul isn’t one to sit in one place,” Randy says. “He’s been all over the world and seen everything, but now that he’s home in Alabama, this is a way for him to still get around, while also doing something to help. You can tell it’s a big thing in his life. It’s a labor of love.”

And he’s seen people transformed along the way.  Two years after visiting the home where the woman was rolled out in her bed at a 7-degree angle, she came out during his next stop there sitting up completely in her bed. “She wasn’t talking real well, but she had started talking a little bit,” he recalls. “That was impressive. Somebody is doing something right. I love seeing that.”

From one veteran to another

Working in the Navy as an engineer and plank owner on a brand-new ship in 1970, David’s engineering officer was attempting to build a sail boat, but he couldn’t finish it.

David, however, took over and was able to build it with the help of a few others. “The deal with the captain was if we could take the sailboat with us, he could sail it whenever we stopped,” he recalls. “We took it with us, and that boat went all over the world.”

When he shares that story at the veteran homes, it draws a chuckle every time because they all know how deals are made working on a Navy ship. They find it hilarious that they stowed away an extra sail boat built by the crew for fun. “Because I am a vet, I can take stuff with me that reminds them of why they were in the service,” David says.

It all gives him a unique ability to relate to his audience, right down to his familiarity with military terms. “You can see that on the faces when you play at these places. They engage, smile, laugh and sing along,” Randy says. “It’s not an easy thing to do all the time, but I’ve never played a gig where David Ladewig doesn’t put his best foot forward. (With) his confidence and charisma, you’ve got somebody up there that knows what he’s doing. He wants to entertain them and connect with them. He’s got a gift for this thing.”

And that is why David continues to travel around and play two to three shows a month—now with a case for his piece of the Berlin Wall.