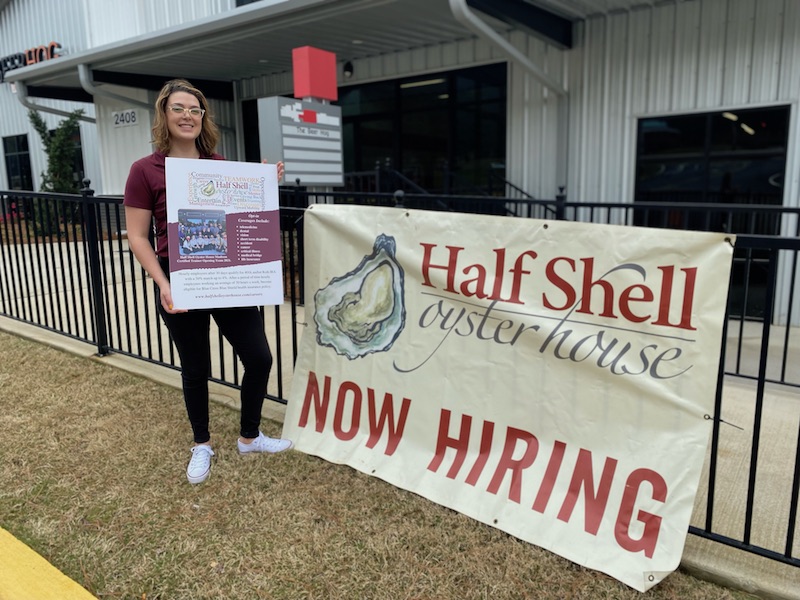 The Pelham location of Half Shell Oyster house is currently accepting applications for all front and back of house positions. The company hosted a job fair open to the public on Wednesday, April 6 and Thursday, April 7. (Reporter Photo/Michelle Love)

PELHAM – The Pelham location of Half Shell Oyster House is currently accepting applications for all front and back of house positions.

The company is holding a job fair on Wednesday, April 6 and Thursday, April 7 and is encouraging everyone to come out and apply.

“We have applications on hand for all positions and I along with our director of operations will be here to help answer any questions,” said Kelsey Griffin, Half Shell’s marketing director.

“We always accept applications for management roles as well,” Griffin continued. “Now, we are really big on moving people up in the company, so a lot of those positions are already pulled in from our other Half Shells. People who might have started off as a server, hostess or busser, we move them up the ranks and fit them into these manager roles.”

Griffin said Half Shell Oyster House is all about staff loyalty and building relationships with its staff members. Half Shell Oyster House has 15 locations across Louisiana, Mississippi and Alabama, including a location in Lakeview, Tuscaloosa and Trussville. Of their 15 locations, only one general manager is an outside hire; all other management roles are individuals who were promoted from entry level roles within house.

“A lot of people think, ‘Oh, it’s a restaurant job it’s just a job,’ but it can be a career,” Griffin said. “It just depends on what you put into it.”

Griffin said they anticipate the Pelham location to open either the second or third week of May. They are accepting applications while they focus on finishing the interior of the Campus 124 space.

“What’s really cool about this location, and it’s the first undertaking at this level that we’ve done here, is that this is an old elementary school,” Griffin said. “Our design team and construction team have never done anything like this before, so it’s going to be really unique compared to our other locations.”

Griffin said she and her Half Shell colleagues are very excited to open the Pelham location, and they have had a very welcoming experience working with the city of Pelham and Campus 124.

“Campus 124, this is the first time we’ve ever worked with them, and they’re fantastic,” she said. “They’ve been really supportive of us coming in here, and we’re excited to be next door to our new neighbors, The Beer Hog. So, we’re really excited to be in this community. We’re looking forward to the small-town vibe we get here.”

While hiring has been difficult in the past two years due to the COVID-19 pandemic, Griffin said it’s refreshing preparing to open a restaurant under relatively “normal” circumstances.

“We opened three locations in the beginning, middle and end of the pandemic and those had their own sets of issues,” she said. “Hiring has been really difficult since then, but it’s really location specific. We’re looking forward to rolling back into pre-pandemic days of opening restaurants.”

The job fair will take place Wednesday, April 6 and Thursday, April 7 from 10 a.m. – 4 p.m. at the Half Shell Oyster location next to Beer Hog located at 2408 Pelham Pkwy. To apply online, visit Halfshelloysterhouse.com/careers.