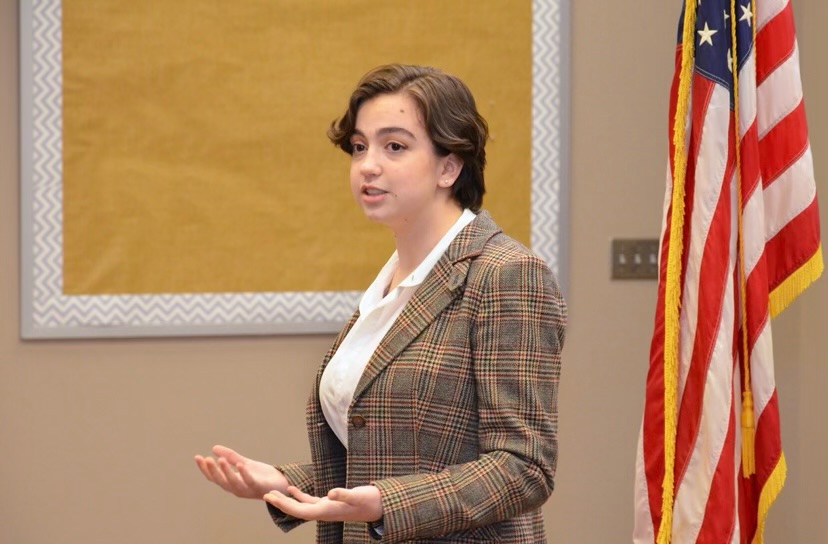 “I was very excited because this was definitely my goal, but I did not expect to necessarily attain it because the people that compete are so excellent,” she said. “I was thrilled, though. I immediately made eye contact with my mom and the people who had come to Montgomery from the Post who came to watch me do this. It was so exciting.”

Noble, a student of Alabama School of Fine Arts, participated in the contest through her work with the American Legion Post 555, which provides various opportunities for young people to use as resources when applying to college. The oratorical contest is one of those opportunities.

Because of her win, Noble will advance to the national level of the Oratorical Scholarship Program.

“We congratulate Emma as she has been successful through the Post 555, District 23, Division 2, now the Alabama State Contests,” said Ron Koonce, the assistant adjutant for American Legion Matthew Blount Post 555. “We wish her well as she competes on the national level against contestants from other states.”

The American Legion’s National Organization awards the scholarships, which can be used at any college or university in the United States. High school students under age 20 are eligible. Competition begins at the post level and advances to a state competition. Legion department representatives certify one winner per state to the national contest, where department winners compete against each other in two speaking rounds. The contest caps off with a final round that decides the three top finishers.

In her primary speech, Noble talked about the significance of executive orders, and she used examples of past presidents who have used the vague definition of executive orders in the Constitution to put their orders in place. Her speech also focused on a citizen’s responsibility to be an informed voter so they know their rights when it comes to a president’s executive orders.

Noble said her speech had to be completely committed to memory, and she was not allowed to use any notes which made her nervous.

“When I got to state, I realized I was actually competing against someone who I lost to last year, so I was particularly nervous about that,” she said.

Despite the stress, she said she enjoys the competition, and she’s very grateful to the people who came out to support her.

“When I won, I made eye contact with my mom, because this was the first one I let her come out to, and then I looked at everyone who came out to Montgomery to support me,” she said.

Noble said she’s thoroughly enjoyed her time working with the American Legion and she’s grateful for the many opportunities the experiences have offered her. She encourages people who are even slightly interested in participating in the oratorical program should definitely try it.

“I’ve really found what I’m passionate about and I enjoy doing it,” she said. “I’ve made some great connections with these people and it is such a great resource. These people are helping me get into the Girls State Program that the American Legion runs, and I had one of the judges last year give me her business card and she offered to write me a college recommendation when the time comes. It’s an amazing opportunity in and of itself.”