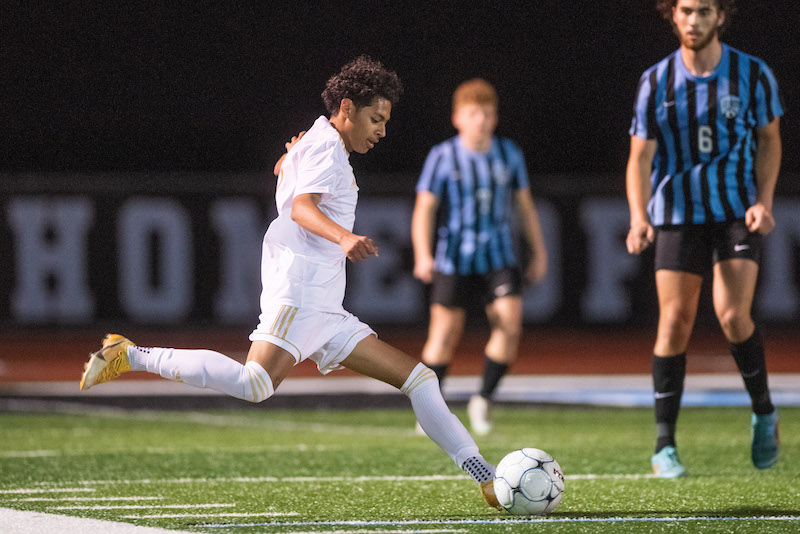 The Pelham Panthers fought to a 1-1 tie with the Spain Park Jaguars in the first game back from spring break on Tuesday, April 5. (File)

HOOVER – Entering on opposite ends of the spectrum so far this season, the Spain Park Jaguars and Pelham Panthers met in a county soccer battle on Tuesday, April 5 looking to pull off victories for different reasons.

With both off Final Four seasons last year, the defending Class 7A State Champion Jaguars were looking to build confidence after a 2-13 start to the season before spring break, while the Panthers were looking to follow the break by continuing a nine-game winning streak.

Neither, however, walked away victorious, but both saw promising signs in a 1-1 tie.

The Panthers, ranked fifth in the 6A classification, took the lead late in the first half.

With about 12 minutes to play in the period, Matthew Chaux-Alvarez found teammate Cleber Esquivel-Garcia. From 20 yards out, Esquivel-Garcia found an open lane and fired a shot into the back of the net to give the Panthers a 1-0 advantage.

That lead held at the half, as the Jags came out to start the second half looking to overcome a 1-0 deficit.

With constant attacking from Spain Park in the second half, Pelham was forced into protect mode, but the Panthers held their own for the majority of the half.

Late in the game, however, that changed.

Looking for an equalizer, the Jaguars got their best opportunity with six minutes left and capitalized.

Jack Warram threw the ball into the box on a perfect pass that found Owen Elder before deflecting off a Pelham defender and into the back of the net for a 1-1 tie.

From there, neither team was able to get one last late goal, leading to the draw.

With the win, Spain Park now has three ties and a win in the last five matches, while the Jaguars are now 2-13-2 overall this season. The defense has given up two goals or less in 12 of the team’s 17 games to give them a chance, but the Jags have scored one goal or less in all but two games this season—a 3-1 win against Albertville in the opener and a 2-0 win against Bob Jones in the final game before spring break.

As for the Panthers in their first game back from spring break, they had their win streak snapped, but they haven’t lost a game since Feb. 11 in the second week of the season.

By giving up one goal in the tie, the Panthers have now given up one or less in all but two games so far this season, as they now sit at 12-3-1 with two weeks left in the regular season.