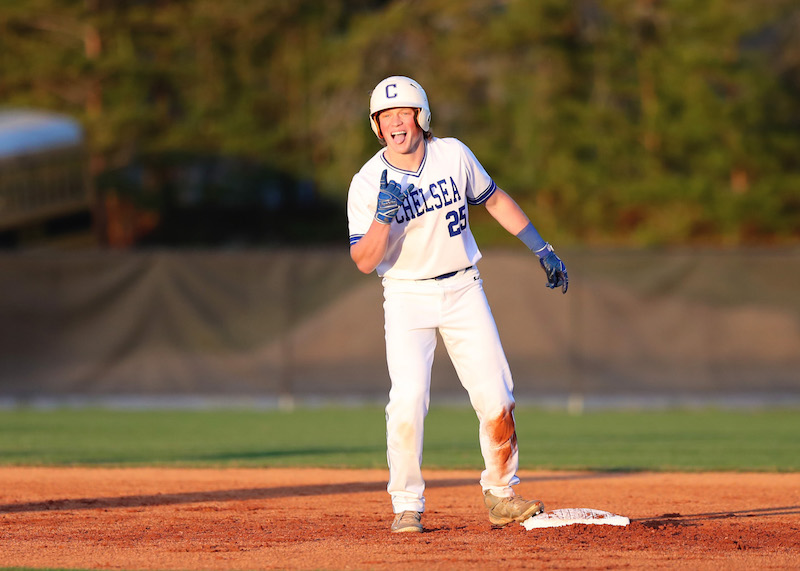 Chelsea split its area series with Homewood, grabbing a 5-2 win and dropping the series finale in a tight 1-0 loss. (For the Reporter/Cari Dean)

For the second time in two weeks, the Chelsea Hornets split an area series in an area that is unfolding as one of the more entertaining in the 6A classification.

After splitting two one-run games with Mountain Brook, losing 3-2 on March 22 and winning 4-3 on March 24, the Hornets returned to area play on April 4 and 7 in games against Homewood.

Chelsea notched another win in the first of the two matchups, picking up a 9-4 victory, before then dropping their second one-run area game of the season in a 1-0 loss on Thursday.

With that, the Hornets improved to 2-2 in area play with an area series against Briarwood left to determine their postseason fate.

In the opening win against Homewood, Chelsea fell behind 1-0 in the first inning, but the Hornets quickly responded with two in the bottom of the inning.

But Chelsea had a late run in the tank.

The Hornets scored two in the fifth to tie the game and then finished off the comeback win with a five-run fifth inning to pick up the 9-4 win.

Reid Gongwer led the way in the victory with two hits and two RBIs in four plate appearances, while Carson Orr and Chris McNeill each finished with one hit and one RBI.

Andrew Floyd got the start on the mound, striking out nine and giving up four hits and four runs. Brandon Ridderhoff pitched an inning and struck out two, while Evan Jones finished off the final two outs.

In the 1-0 loss three days later, the two teams ended up in a pitcher’s duel with Gongwer and Kaden Heatherly putting together strong performance for Chelsea.

Gongwer gave up one run on one hit and three walks, while striking out five. Heatherly then finished off the final 1 2/3 innings, striking out three and giving up no runs.

The Hornets actually outpitched and outhit the Patriots, posting three hits compared to one, but Homewood’s lone hit ended in an RBI that made the difference.