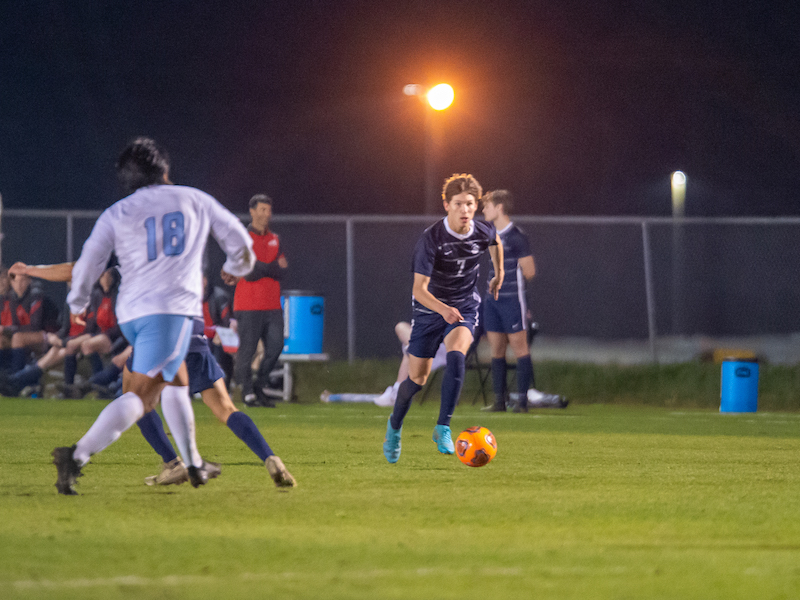 The Oak Mountain Eagles overcame an early 1-0 deficit against area foe Hoover on April 7, using three goals from Nate Joiner to clinch a win and spot in the playoffs. (File)

NORTH SHELBY – The Oak Mountain Eagles are officially heading to the postseason after another win against rival Hoover on Thursday, April 7.

The Eagles, who beat Hoover 5-0 back on March 17, fell behind 1-0 early, but responded with three unanswered goals on their home field to take down the Bucs and clinch a spot in the playoffs.

Oak Mountain didn’t lock up the area title, but improved to 4-0 in area play with games left against Tuscaloosa County and Thompson April 11 and 15. Thompson is the only team in the area still with a chance at the area title.

Looking for the season sweep against the Buccaneers, the Eagles fell behind 1-0 in the first seven minutes off a corner kick.

The deficit, however, didn’t last long.

Oak Mountain got its first of three goals in the game from Nate Joiner in the 20th minute for the equalizer as part of a hat-trick performance.

The game remained tied 1-1 at the halftime break, but with adjustments, the Eagles came out and took the lead for good in the first two minutes of the second half on Joiner’s second goal.

It wasn’t easy from there, as Oak Mountain had to fend off the Bucs the rest of the way.

But with three minutes to play and no scoring success from Hoover, the Eagles put away the final blow on Joiner’s hat-trick goal.

In addition to Joiner’s scoring, Garrett Murphy was also big with assists on two of those goals. Owen Wells also made three big saves in goal, while the Eagles got shots from Gabe Capocci, Aidan Riley and Nate Taylor.

Oak Mountain is now 12-3-4 overall this season and 4-0 in area play. The Eagles have yet to give up more than two goals in any game this season and have posted eight shutouts.