Spain Park softball team takes down No. 1 by 14 runs 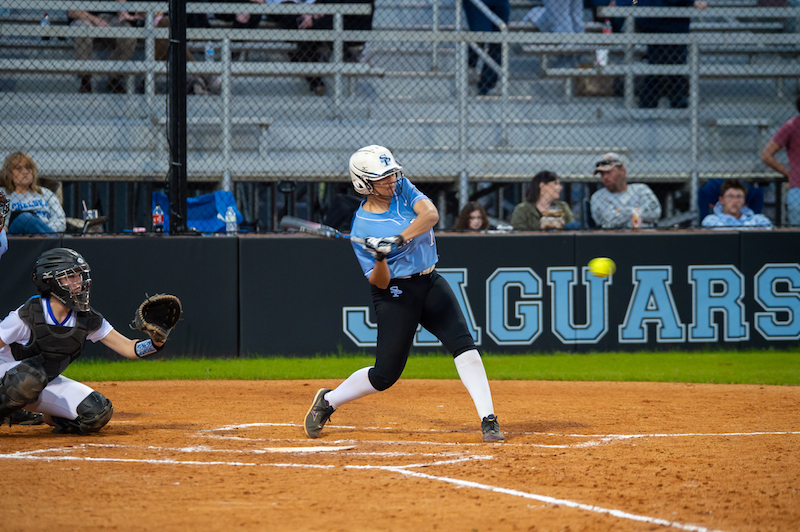 Spain Park’s softball team took down Class 7A No. 1 Hewitt-Trussville 16-2 for an area win on April 7. (File)

TRUSSVILLE – The Spain Park Jaguars made a statement on Thursday, April 7 against the No. 1 team in the 7A classification.

Not only looking to take down the best team in the state but grab an area win as well, the Jags put together a dominant effort against the Hewitt-Trussville Huskies to pull away for a 16-2 victory.

After the two teams matched one another in the opening inning of the game with one run each, the Jags put together their first big inning to start creating separation in the top of the second.

A walk and an error were recorded before the first out, which set up Emma Jolley for an RBI double to left field.

Another single from Emma Hawkins loaded the bases, before a Katie Flannery Walk brought home one more and a fielder’s choice from Maggie Daniel another to make it 4-1 with two outs.

Charlee Bennett then stepped to the plate and blasted a home run over the wall in center field to make it 7-1 through two innings of play.

The Jags then tacked on one more each in the third and fourth thanks to an RBI single from Hawkins and a passed ball to put them on top 9-1.

The Huskies added one in the bottom of the fourth, but 9-2 was as close as they got the rest of the way.

Spain Park posted two more in the fifth and then closed out the game with five in the seventh to pick up the 14-run victory.

Bennett and Daniel both finished with two home runs in the win, as Daniel finished with six RBIs and Bennett totaled four RBIs. The Jags had five other extra base hits as well.

Flannery finished 3-for-3 with two RBIs, while Hawkins added three hits and one RBI. Jolley and Kyndal Heaton both had one hit and one RBI.

Ella Reed was big in the circle as well, totaling 10 strikeouts and allowing two runs on six hits and four walks to grab the win.