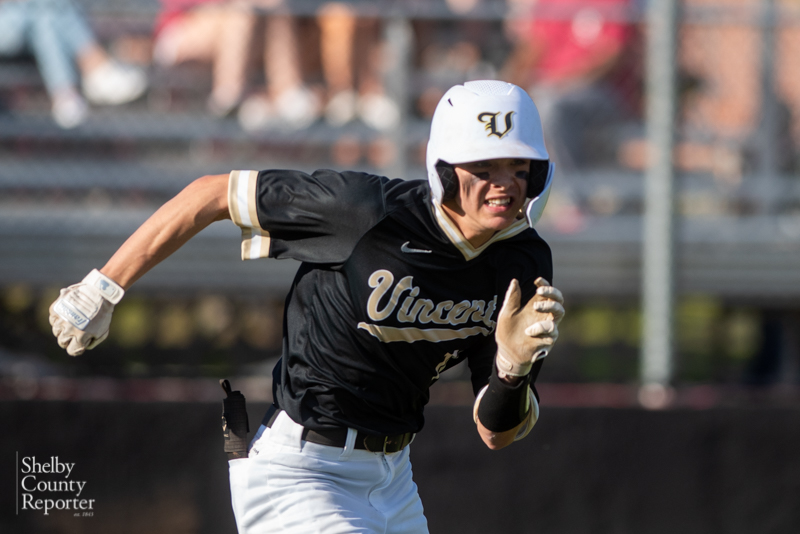 The Vincent Yellow Jackets claimed the 2022 Class 2A, Area 8 Championship after sweeping two area games with Fayetteville by scores of 8-2 and 9-3. (Reporter photo/Keith McCoy)

VINCENT – The Vincent Yellow Jackets continued a stellar season as the No. 3 team in Class 2A during the week of April 4, picking up two more area wins against Fayetteville to lock up the area championship.

With wins of 8-2 on Monday and 9-3 on Thursday, April 7, the Jackets improved to 4-0 in area play, which became enough at the end of the night to claim the Class 2A, Area 8 title.

In the opening game of the series Monday, Vincent fell behind 1-0 in the bottom of the second, but the Jackets responded with three runs in the top of the third to take the lead for good.

Vincent then added one more in the fifth and four more in the sixth to take an 8-1 advantage.

Faytteville added one more in the home half of the sixth, but it wasn’t enough in the six-run loss.

The Jackets outhit the Wolves 7-2 in the win, as Aiden Poe was big on the mound for Vincent.

Poe picked up the complete-game victory, striking out seven and allowing two unearned runs on two hits and two walks.

At the plate, Zac Carlisle led the way with two hits, including a triple, and four RBIs. Easton Fields added two hits and one RBI, while Poe and Myles Fincher both finished with one hit and one RBI. In addition to that, Eyan Davis added one RBI on two walks, while Grayson Gulde finished with a hit and run scored.

In the second game on Thursday, the Jackets entered looking for the sweep, and a big second inning helped make it happen.

Fayetteville scored one run each in the first three innings, but Vincent followed a one-run bottom of the first with four more runs in the second.

Up 5-3, the Yellow Jackets then added two each in the fifth and sixth to close out a 9-3 win and earn the area championship.

Davis led the way for Vincent in the win thanks to a 2-for-4 game with two RBIs, finishing with one home run. Carlisle and Camden Cobb both finished with a hit and RBI, while Gulde finished with one hit. Fields, Fincher and Hunter Burnette all had one RBI.

On the mound, Gulde picked up the win, striking out eight in five innings of work. He gave up three runs, two of which were earned, on six hits and three walks. Carlisle finished off the final two innings and was flawless, striking out three and giving up one walk, no runs and no hits.

Vincent is now 18-5 on the season after falling to Fayetteville in a 7-0 game that didn’t have any bearings on the area standings later that same night.