Commission votes down petition for improvement district in Mt Laurel 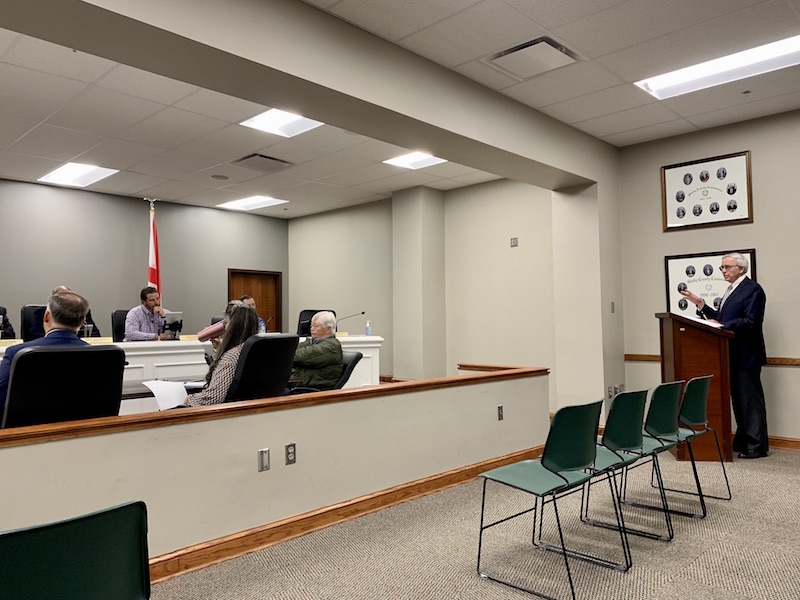 Attorney Heyward Hosch speaks to the Shelby County Commission on April 11 about a developer's petition to form an improvement district in the Mt Laurel area. (Reporter Photo/Emily Sparacino)

COLUMBIANA – A petition to form an improvement district in the Mt Laurel area failed to gain approval from the Shelby County Commission on Monday, April 11.

The Commission voted against the petition from Harris Doyle Homes and EBSCO Industries to form and incorporate The Hillsong at Mt Laurel Improvement District, which would include and serve a 170-lot residential development on property located near Mt Laurel Elementary School.

According to the petition, the formation of the improvement district would have involved levying assessments on each of the 170 lots at a rate of $800 per year for a 20-year period for public improvements, including water facilities and roads and streets.

Shelby County Manager Chad Scroggins said the homebuyers would have had to pay the public improvement fees, adding that second and third homebuyers within the 20-year period might not understand why they were obligated to pay a fee.

The Shelby County Planning Commission previously approved the Hillsong at Mt Laurel residential development, but the petition to form an improvement district was a recent matter, Scroggins said.

“This was never mentioned at the Planning Commission,” Scroggins said. “When it was brought to us in January, originally, there were no details to it, so we asked for more details.”

Attorney Heyward Hosch said the petition to form an improvement district was not a statute designed to benefit the governing body that is asked to help.

Hosch said the developer, who owns the land on which the development is being constructed, would start financing the infrastructure before the homes are sold.

Scroggins said he and County Attorney Butch Ellis held a meeting with the developer and the developer’s attorney and discussed other options, and their request was to bring the petition before the Commission.

“Other developers are dealing with this without putting this on the county,” Commissioner Robbie Hayes said. “I don’t see the benefit to the county at this point of us getting involved, and I don’t see the benefit to the people buying these lots. For that reason, I have a problem moving forward with this without more information that would make me feel good about doing this, especially when I’m just seeing this for the first time.”

Commissioner Rick Shepherd, whose district the development is located in, said he did not see how the improvement district would benefit the citizens of Mt Laurel.

Hayes and Commissioner Lindsey Allison said they would be open to discussing the matter more at a later date, but were not comfortable moving forward with it now.

• Approved a $129,999 bid from Phoenix Contracting for a mobile health clinic trailer.