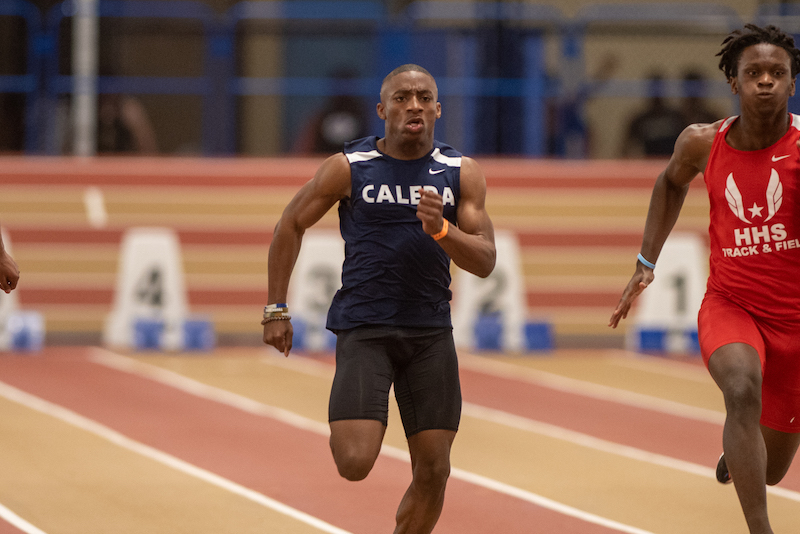 Calera's Braylyn Farrington was one of nine to win an event at this year's Spain Park Classic on Saturday, April 9. (File)

HOOVER – The outdoor track-and-field season is in full swing, and several teams showed they were in midseason form at the Spain Park Classic on Saturday, April 9 at Spain Park High School.

At the event, nine local athletes finished on top of the podium in first, while several others earned podium and top-five finishes to highlight the event as the postseason nears.

For the boys, Keon Buck and Kenneth Bishop both won individual events, while the 4X100-meter and 4X800-meter relay teams both picked up wins as well.

The boys also had two finish inside the top five in pole vaulting with Jaden Nguyen and John Landers finishing fourth and fifth after clearing 13 feet. Connor Blair finished right behind in sixth after clearing 12 feet, 6 inches.

The boys also got a finish of fourth in the discus throw from Zachary Erickson after he completed the event with a distance of 120 feet, 3 inches.

Mason Bowden was the final top-five finisher for the boys, taking fifth in the javelin throw behind a distance of 130 feet, 10 inches.

Mackenzie Culpepper also had a big day for the Jaguars, leading the girls’ team by finishing in the top two in two different events. She won the 800-meter run with a time of 2:15.36 and finished second in the 400-meter dash with a time of 57.52 seconds.

The Jags also got a top-five finish from LaCoria Nelson, who finished fifth in the shot put after totaling 31 feet, 5 inches.

It was also a special event for the Calera Eagles, as Braylyn Farrington and Jordon Bray continued remarkable seasons as two of the state’s top sprinters.

Both won events, with Farrington claiming the boys’ 200-meter dash behind a speedy time of 21.99 seconds, while Bray won the girls’ 400-meter dash with a time of 57.01 seconds.

Bray also finished inside the top five in the 200-meter dash, taking fifth with a time of 25.71.

He was joined by Tre Bright, who also grabbed a finish of fifth in the shot put behind a distance of 41 feet, 2.5 inches.

The Chelsea Hornets also had multiple highlights with five different podium finishes and several others in the top five.

Brandon Sims claimed a podium finish in the long jump thanks to a distance of 20 feet, 0.5 inches, which earned him second place.

For the girls, Lily Rigor added a podium finish in the 300-meter hurdles with a time of 47.77 seconds, which was just a second off the winning pace.

Beyond her, Jadlyn Debardlabon also finished second in the long jump with a distance of 16 feet, 8.5 inches, while Avery Burleson finished on the podium in third in the high jump after clearing 4 feet, 8 inches.

Debardlabon also finished inside the top five in the triple jump after totaling 31 feet, 4.75 inches to claim fourth.

Juliette Edwards also had a top-five finish, claiming fifth in the 3,200-meter run after finishing the race in 13:07.65.

The boys’ 4X100-meter relay team finished inside the top five as well, taking fifth with a time of 44.52 seconds, while the girls got strong finishes from the 4X100-meter team and the 4X400-meter team.

Kate Suanders led Briarwood with a win in the discus throw. She finished first after reaching a distance of 95 feet, 3 inches, winning by more than three feet.

Mary Grace Parker was also a highlight for the Lions at the event thanks to a finish of second in the 3,200-meter run. The freshman finished the event with a time of 12:14.98, which was second by just a second and beat out third by close to 20 seconds.

Gabe Margene added a finish of fourth for Briarwood in the 300-meter hurdles, finishing with a time of 45.33 seconds, while Mary Grace Parker finished fifth in the 1,600-meter run behind Doss thanks to a time of 5:34.28.

The girls’ 4X100-meter relay team finished fifth for the Lions behind a time of 51.73 seconds.

Indian Springs School was highlighted by Elise Picard, who competed in two separate events and finished inside the top 10 in both.