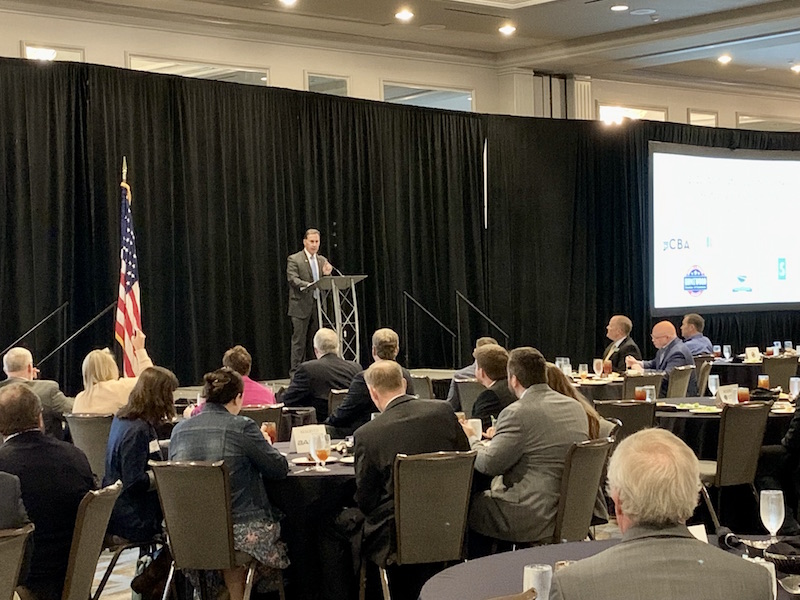 HOOVER – U.S. Congressman Gary Palmer provided insights into inflation, energy production, the war in Ukraine and other topics at a luncheon on Monday, April 11.

Palmer, who represents Alabama’s 6th District in the U.S. House of Representatives, spoke to a large group gathered at the Hyatt Regency Birmingham – The Wynfrey Hotel for the Washington Update Luncheon, an event held by local chambers of commerce.

“Had that not occurred, we would be within just a few months of the completion of that pipeline, which would be delivering 8,030 barrels of Canadian oil to the United States, which would help keep our energy prices low,” Palmer said. “Instead, we’ve been importing almost 600,000 barrels of Russian oil.”

Palmer said government and corporate regulations, particularly in terms of lending, impact the decisions small companies that are doing the drilling are making as they do not have access to capital.

“Energy prices have an impact on energy futures,” Palmer said. “There is not a single thing that you come in contact with today in terms of consumable that doesn’t have an energy cost. Everything has an energy cost, and it’s compounded. That’s one of the main reasons why inflation immediately spiked, because energy is the most inflationary part of the entire economy.”

Palmer also discussed the geopolitical impact of energy prices and production, and said the U.S. needs to rethink its foreign investments and re-engage its energy production.

“In today’s world, perhaps the most powerful weapon in the arsenal of democracy is U.S. energy,” he said. “We have enough resources to dominate the world.”

Regarding politics, Palmer noted a pervasive sense of division throughout the country, which is all the more evident in low voter turnout.

Palmer meets with college students on the first Monday of every month during the academic year to talk about leadership and their roles as citizens.

“We’re trying to reinstill the principles that our country was founded upon, and at the same time admitting the mistakes, but not letting the mistakes destroy our future,” he said. “I think that’s what we need to be doing in our communities—encouraging one another to own up to the mistakes, but lay out a future that recognizes that we are not perfect. Our Constitution says, ‘in order to form a more perfect union,’ not a perfect one.”

Regarding the war in Ukraine, Palmer said, “Russia cannot win the war.”