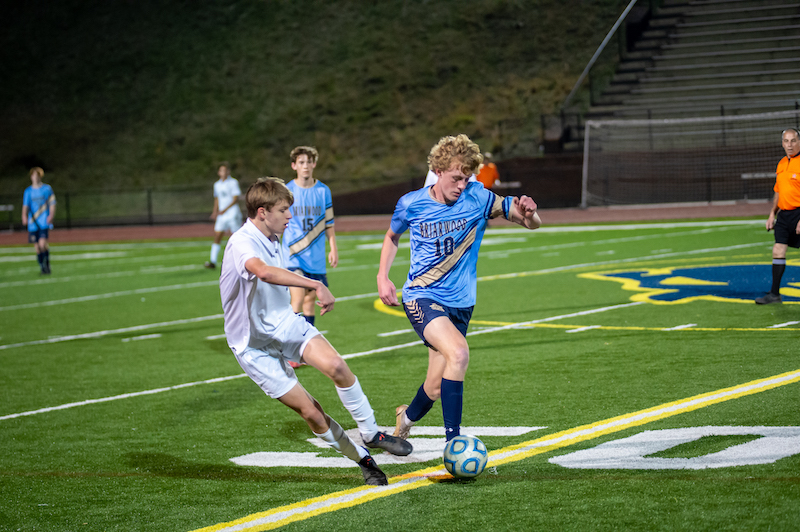 Briarwood was able to take down rival Chelsea 3-1 on Tuesday, April 12 thanks to a hat trick from Mathias Leib. (File)

With Chelsea gaining confidence and on the attack late in a rivalry battle, Briarwood’s Matthias Leib responded in a big way in the final 11 minutes of the game, completing a hat-trick performance to give the Lions a 3-1 rivalry win over the Hornets.

Leib answered the call after Chelsea had just drawn to within a goal with 12 minutes to play by scoring one minute later for the final blow in the two-goal victory.

It put an end to postseason hopes for either team, as they both compete in the most difficult area in the 6A classification with each area team ranked inside the top 10, including Mountain Brook at No. 1 and Homewood at No. 2.

But after the No. 8 Lions had lost three of their area matchups by one goal, including a 2-1 loss to Chelsea on March 18 and losses of 2-1 and 1-0 to No. 2 Homewood, they entered looking to erase that heartbreak.

That happened thanks to Leib, who put his first goal of the game on the board late in the first half.

And like the second half, he closed the period strong by adding a second goal before the halftime buzzer sounded to put Briarwood on top 2-0 at the break.

The second half also started slow, similar to the first half, as the two defenses shined for the first 25 minutes.

That changed, however, when Kaleb Bass put the Hornets on the board with 12:05 to play to create some buzz in front of the home crowd.

Leib, however, was Johnny on the spot, powering through his hat-trick goal right after to end the threat and give the Lions their first area victory of the season.

With the Briarwood win and Chelsea loss, both teams moved to 1-4 in area play, while Homewood was 3-2 and Mountain Brook 5-0.

With only one area game left for each, the worst Homewood could do would be to finish 3-3 and Mountain Brook 5-1, putting an end to postseason hopes for both the No. 6 Hornets and No. 8 Lions.